UN climate talks in Madrid have stalled. Countries are blaming the US. 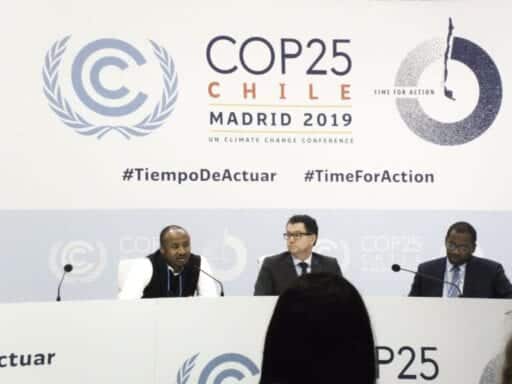 Share
Loading...
Seyni Nafo (left), former chair of the African Group of Negotiators, said at the COP25 that having no agreement is better than having a bad agreement. | Umair Irfan/Vox

Negotiations over the Paris climate agreement are now in overtime.

MADRID — A tense round of international negotiations over the future of global action on climate change was running into overtime on Friday night, and some negotiators say the current round of talks may not result in an agreement at all. And part of the holdup is coming from the United States.

The United Nations meeting known as COP25 will likely run into the weekend as the future of the 2015 Paris climate agreement hangs in the balance.

“We only have a few hours left to come to an agreement,” Andrés Landerretche, COP25 presidency coordinator, said at a Friday press conference. “We’re going to remain on the premises as long as it takes.”

The negotiations over the past two weeks were meant to finalize the Paris rulebook, a series of regulations that countries would use to meet their targets for cutting greenhouse gas emissions under the Paris agreement. The talks were also aimed at getting more countries to agree to higher goals.

But the same key issues that were left unresolved during the last round of negotiations in Katowice, Poland, in 2018 remain under debate in the current bargaining session. And it’s unclear whether countries will stay at the table until they reach an accord, or if they will walk away without an agreement.

“The overall assessment is, this is not a good situation,” Seyni Nafo, the former chair of the African Group of Negotiators on climate change, told reporters on Friday. “Not having a decision on some of those issues might be better than having a bad decision.”

One big hurdle is the set of rules around creating an international carbon market under Article 6 of the Paris agreement. Most countries agreed on the guidelines, and negotiators have been reluctant to name the holdouts. But on Friday, Carlos Manuel Rodríguez, Costa Rica’s minister for energy and environment, called out the United States, Brazil, and Australia as the parties thwarting closure on the issue.

Costa Rica’s environment minister Carlos Rodriguez says negotiations on carbon markets (Article 6) are stalled. He names Australia, Brazil and the US for trying to undermine the environmental integrity of the market. Those positions are “unacceptable” he says. #COP25

These carbon-trading mechanisms are important for how some countries plan to meet their goals, using tactics like restoring a section of tropical rainforest that can act as a net absorber of carbon dioxide. The trouble is that such schemes can be gamed to avoid making real cuts in emissions. There are also some accounting problems in Article 6 that need to be resolved, like double-counting credits.

Jennifer Morgan, the co-executive director of Greenpeace International who has attended every COP meeting, said this intense focus on trading mechanisms is a sign of how much polluters are shaping the agenda. “This COP [meeting] is particularly disturbing because I see more and more the emphasis or the influence of the fossil fuel companies here than should be the case,” she said.

Another lingering obstacle is the language around loss and damage under Article 8 of the Paris agreement. These are proposals for compensating developing countries for ongoing damages caused by climate change. It’s a high priority for island countries facing rising sea levels and for African countries that have already experienced devastating extreme weather worsened by climbing temperatures.

Here, activists and other negotiators again blame the US, which they say is insisting on language that would prevent any other country from holding it, the largest historical emitter of greenhouse gases, liable for any climate-related damages.

For some developing countries, this is a deal breaker, and they are ready to leave the table until the next round of negotiations in 2020. “We have some red lines in our position,” said Tanguy Gahouma, incoming chair of the African Group of Negotiators. “We are ready to continue this discussion next year if we can.”

It’s especially frustrating for negotiators because the US will exit the Paris agreement altogether next year and thus will not be impacted by any provisions in the accord, but is still making the process more difficult for everyone else.

“That’s why this question of diplomacy is really important next year because we have to live in a way having absorbed the shock of the US withdrawal,” said Laurence Tubiana, a French diplomat who helped negotiate the Paris agreement.

The US delegation did not respond to Vox’s request for comment.

All the while, environmental activists have grown jaded by the proceedings. More than 200 campaigners were ejected from the COP25 venue this week and dozens blocked roads outside, with some camping out overnight until being forced away by police.

Swedish climate activist Greta Thunberg, who sailed across the Atlantic Ocean to attend the COP (and who was named Time magazine’s Person of the Year this week), received a rock star’s welcome. But she described the COP in an address as “an opportunity for countries to negotiate loopholes and to avoid raising their ambition.”

On Friday, she joined a school strike for climate change in Turin, Italy.

There were some bright points for climate campaigners, however. Earlier in the week, the European Commission announced its European Green Deal, a plan to make the 28 countries in the EU “climate neutral” by 2050 and to halve its emissions by 2030.

The EU is the world’s largest economic bloc and is the third-largest greenhouse gas emitter. But every country in the world have to make similar or more aggressive commitments to curb emissions in order to meet the Paris agreement goals.

As the COP25 meeting drags on, the time left to reduce emissions to avoid the worst impacts of climate change is running out.

Well, the bucket is about to overflow in a few short years, unless we:
1. Turn off the tap (urgently)
2. Put a hole in the bottom to remove CO₂ (negative emissions)#COP25 #CarbonBudget @FutureEarth @gcarbonproject https://t.co/ycYcuFSPdF pic.twitter.com/o7JwZt7GlX

How Spain’s coronavirus outbreak got so bad so fast — and how Spaniards are trying to cope
Iran is to blame for its recent aggressive actions. But so is Trump.
Collisions reveal a Navy tragically undone by its can-do spirit
Trump hates being laughed at. This video seemingly shows world leaders doing just that.
Polls show Trump is losing ground where the coronavirus is surging
The 15 most awe-inspiring space images of the decade