UN: The world has backed itself into a treacherous corner on climate change 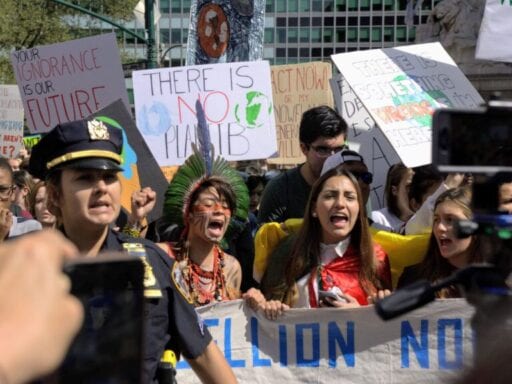 Share
Loading...
A global wave of youth-led activism around climate change is rising, but countries remain further than ever from their climate change goals. | Umair Irfan/Vox

Countries are far off course in meeting emissions goals. More drastic actions are needed to get back on track.

The world is further off course than ever from meeting the goals of the Paris climate agreement and averting climate catastrophe as the divide between countries’ pledges and actions continues to grow.

This grim assessment comes from the latest United Nations Emissions Gap Report published Tuesday. “Gap” refers to the difference between what countries have committed to do to limit climate change and what they actually need to do to meet greenhouse gas targets.

The findings aren’t surprising, given that global greenhouse gas emissions have reached all-time highs in recent years. But they are still alarming. Since the first gap report was published in 2010, carbon dioxide emissions have risen 11 percent.

“The summary findings are bleak,” the report states. “Countries collectively failed to stop the growth in global GHG emissions, meaning that deeper and faster cuts are now required.”

The UN’s climate science body, the Intergovernmental Panel on Climate Change, reported last year that limiting warming this century to 1.5 degrees Celsius, the more ambitious target in the Paris agreement, would require immediate, drastic changes to the global economy. The world would have to halve its emissions by as soon as 2030, reach net-zero emissions by 2050, and then pull more carbon dioxide out of the air than it emits thereafter.

If the world had gotten its act together in 2010, countries would only have to reduce their emissions 3.3 percent per year to reach the 1.5 degree Celsius target.

Now global emissions have to fall by 7.6 percent a year between 2020 and 2030. But according to the new gap report, the current trajectory puts the world’s emissions to overshoot the 2030 target for 1.5 degrees Celsius by 38 percent. The current pace of emissions would lead to as much as 3.2 degrees Celsius (5.7 degrees Fahrenheit) of warming by 2100. This would be a world where millions more people would have to abandon coastal areas due to rising sea levels and vastly more dangerous periods of extreme heat.

At the same time, the IPCC has also warned that the changes in the climate already underway are leading to unprecedented and irreversible shifts in lands, oceans, and the frozen parts of the planet, making them hostile to life.

In September, the UN convened the Climate Action Summit to prod countries to take more aggressive action to limit greenhouse gas emissions. But the three largest emitters in the world — China, the United States, and India — declined to step up their commitments in any significant way.

And the longer the world waits to act, the tougher it will be to limit warming. However, the gap reports says that it’s still possible to meet the Paris climate goals. It won’t be easy, but the technologies are already here to decarbonize electricity production, increase energy efficiency in buildings, protecting and restoring natural ecosystems, and make cropland take in more carbon than it emits.

Countries will have another chance to step up their ambitions next month in Madrid, Spain, at the next UN climate meeting, called COP25. There, countries will have to cement the details of how they plant to meet their targets under the Paris climate agreement and sort out contentious issues like how to account for emissions reductions, what obligations poorer countries face, and how to create an international carbon trading mechanism.

“These rules must be designed right,” said Yamide Dagnet, a senior associate at the World Resources Institute’s International Climate Action Initiative, during a call with reporters. “Without proper oversight and robustness, these mechanisms could severely undercut climate action by creating loopholes, letting countries off the hook for making meaningful emissions cuts, result in double counting, and jeopardize environmental integrity.”

Correction: The UN report initially stated that the amount of warming expected by 2100 was 3.4 to 3.9 degrees Celsius. The story has been updated with the correct figure: 3.2 degrees Celsius.

Mr. Robot’s final season is a brilliant argument for the show’s ongoing relevance
Freelance journalists are mad about a new California law. Here’s what’s missing from the debate.
Joe Biden says the pandemic response is an opportunity for structural change
Clean energy is catching up to natural gas much faster than anyone thought
The Handmaid’s Tale season 2 was masterful. But it may have broken the show.
How HIPAA lets Trump pick which medical details are released to the public