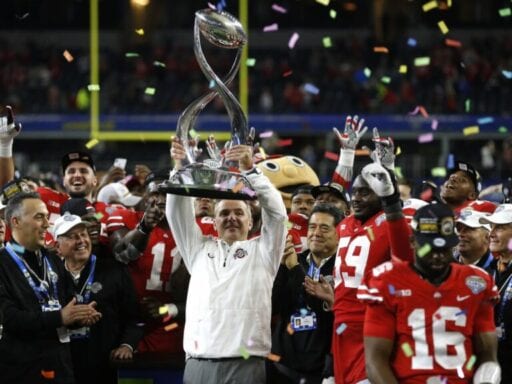 A “winningest” football coach ignored a decade of signs that his assistant coach was abusing his wife.

Ohio State’s powerhouse football coach, Urban Meyer, is suspended from Saturday’s season opener against Oregon State, and he won’t be on the sidelines at the next two games either.

Last week, the university released a report that concluded Meyer had mishandled accusations that his friend and assistant coach Zach Smith had been abusing his wife — beginning with an arrest in 2009 for allegedly pushing his pregnant wife into a wall.

Meyer fired Smith on July 23 after a judge issued an order of protection for Smith’s now ex-wife, Courtney Smith. (Meyer said the decision was “a very tough call.”)

College football reporter Brett McMurphy published an article a week later that includes text messages, photographs, and documents that make it very hard to believe Meyer did not know anything about Zach Smith’s run-ins with police.

“[Meyer’s] apparent blind spot for Zach Smith seems to have impaired his judgment and his management of the behavior of at least one of his assistants,” investigators working for Ohio State wrote in their report.

On Friday, Meyer posted an indignant response on Twitter to recent media coverage. He pointed out that investigators gave him the benefit of the doubt about why he said untrue things. “He clearly misspoke and made misstatements, but the reason that happened are complex. Coach Meyer, in our view, did not deliberately lie,” the report states.

The case tests the presumption that so many men are able to get away with sexual misconduct because victims don’t speak up. Many cases that emerged in the past year tell another story: When a victim does speak up, the powerful don’t always want to listen.

Meyer, it seems, did not want to find out the truth about Smith. He accepted denials at face value, despite 911 calls, photographs depicting abuse, his own wife’s concerns about the safety of her friend, and a litany of troubling infractions at work, including some of a sexual nature.

#MeToo started as a movement to break the stigma around speaking out about sexual harassment and assault, to give victims a voice. But whether it’s a football coach like Meyer, or an executive in a media company, or a manager in a big government agency, again and again, we’ve seen that the problem isn’t always a victim’s silence — it’s the silence of people with the power to do something.

There were a lot of red flags

Meyer apologized publicly last week, saying he wished he had known what had been going on. “There were red flags,” he conceded. “I wish I did a better job knowing things and finding out things. I wish people told me more things. … I wish I had known more.”

Meyer is right. For about a decade, red flags flapped in the wind, beginning with Smith’s arrest in 2009 after his pregnant wife called the police and said he had slammed her into a wall. Meyer advised Smith to go to couples therapy. (Meyer says he did not believe Courtney Smith’s claim, which Zach Smith told him was not true.)

Meyer says he does not recall any discussion with his wife about Courtney Smith’s allegations of abuse or her trip to talk to the cops. Investigators didn’t buy it: “Given the closeness of their relationship and Shelley’s concerns, we believe it is likely that Shelley and Urban Meyer had at least some communication about these allegations in late 2015 and were concerned about them.”

Zach Smith, for his part, broke his silence on Wednesday, lashing out on Twitter at the university for the investigation and stating that he never beat his wife.

Investigators looked at a number of questions involving what Meyer knew about Smith, when he knew it, and whether he lied about it.

When Meyer fired Smith on July 23, he exchanged messages with other members of the Ohio State athletic department to decide what to say at a Big Ten media event the next day. They discussed how Meyer might avoid explaining what he knew about incidents involving Smith in 2015. Meyer said the next day at the media event that he did not know anything about them.

Investigators saw the text messages that suggested Smith had talked about the 2015 incidents on the 23rd, only to deny knowing about them on the 24th. Meyer again denied knowing about the incidents in an interview. The investigators were puzzled and couldn’t explain the discrepancy. They concluded that Meyer had “significant memory issues” and that he has taken medication that “can negatively impair his memory, concentration and focus.”

Meyer also received a text from his wife the night he fired Smith that said: “I am worried about Zach’s response. He drinks a lot and I am just not sure how stable he will be. Afraid he will do something dangerous. It’s obvious he has anger/rage issues already.”

According to investigators, Meyer learned how to delete text messages from his phone that were more than a year old. After ducking a records request repeatedly, he turned over his phone, which only had one year of text messages on it.

The gist of the findings certainly trends negative for Coach Meyer. He forgot whether he knew a significant detail, forgot that his assistant coach was arrested and charged with domestic violence, or, more realistically, he just lied about it. His phone was mysteriously wiped after he looked for help on how to wipe a phone. He received a worried message from his wife about potential violence. None of this suggests he’s a man looking to take responsibility for his actions.

Ohio State officials read these findings and concluded that his behavior wasn’t bad enough to fire him. This is the kind of response that perpetuates systems that protect abusers. Even when caught red-handed, a football coach gets to keep his job because he wins games.

In September 2014, security footage of Baltimore Ravens running back Ray Rice knocking his fiancée unconscious in an elevator went viral, unleashing a nationwide debate about what behavior should be tolerated in the NFL.

It felt like a flashpoint — a moment when the country was taking stock in what we expect of men we consider “masculine.”

The players association even started a domestic violence group, which hired experts to commission a study of family violence in the league. But two experts resigned after their findings, efforts, and opinions were ignored.

At the same time, the cases kept coming. During the 2017 draft, half a dozen new players were welcomed into the NFL, despite pending charges of physical or sexual assaults. Another video emerged, this time of Joe Mixon breaking four bones in a woman’s face.

The NFL’s problem with domestic and sexual violence hasn’t gotten any better. And the feeder system that sends the league players isn’t helping. Not only do national statistics suggest high rates of sexual assaults on college campuses, there are also many well-documented cases of universities and campus police departments specifically ignoring cases involving athletes, especially football players.

On campus, college football players are celebrities, held up as the archetype of what it means to be a young man — tough, strong, and violent (on the field). The institution props them up, eager to attract the best players and run successful (and lucrative) programs.

Propping up a program means schools protect players and coaches at the expense of victims, whether it’s the woman who accused Florida State’s Jameis Winston of rape, the children victimized by Jerry Sandusky at Penn State, or the wife of an assistant coach like Smith.

And the more winning there is, the more incentive to sweep wrongdoing under the rug. Urban Meyer, for example, isn’t just any coach. He’s delivered three national championships, making him one of the winningest coaches in college football.

This isn’t what colleges are supposed to be about. The job of a university is to educate and to challenge students to be smarter and better people. The point of a code of conduct is to remind students that higher learning is also about being a person with morals.

But when it comes to athletics, universities have built structures that prioritize games over principle.

Universities should be embracing the opportunity to become part of the solution in the era of #MeToo. But in the case of Urban Meyer and Ohio State, they opted to keep the system intact.

“I appreciate the opportunity to learn from a mistake,” Meyer said at a press conference Wednesday, in a statement that couldn’t be more ironic.