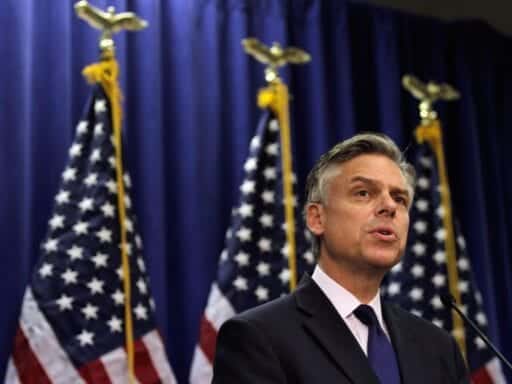 United States Ambassador to Russia Jon Huntsman fired back at those calling for him to resign after President Donald Trump’s performance at the Helsinki summit with Russian President Vladimir Putin, saying he’ll continue to serve and represent the US’s interests in this “fragile” moment.

Huntsman late Saturday wrote an op-ed explaining his reasoning in the Salt Lake Tribune, responding to a piece published earlier in the week by columnist Robert Gehrke in the same newspaper calling for him to step down. Huntsman’s brother, Paul Huntsman, bought the Salt Lake Tribune in 2016 and is its owner and publisher.

“Ambassador Huntsman, you work for a pawn, not a president. It’s time to come home,” Gehrke wrote on Tuesday. He argued that there is “no other reasonable course of action to take” after Trump’s disastrous press conference with Putin on Monday, during which the US president appeared to side with Putin over the US intelligence community on the matter of Russian meddling in the 2016 election.

Gehrke said that Huntsman’s duty to his country is “not by holding on to some title and being the emissary of a president who doesn’t share your values, or American values, for that matter,” but instead to step down.

Huntsman, a former Republican governor of Utah and US ambassador to China under the Obama administration, responded with his own op-ed on Saturday, saying he respects Gehrke as an opinion writer and the “legitimate arguments on all sides.” But he disagrees with the assertion he should go away:

If you have occasion to visit us in Moscow, I will introduce you to hundreds of colleagues, who are the most highly trained in their field with years of experience working in Russia. Representatives of our foreign service, civil service, military and intelligence services have neither the time nor inclination to obsess over politics, though the issues of the day are felt by all. Their focus is on the work that needs to be done to stabilize the most dangerous relationship in the world, one that encompasses nuclear weapons, fighting terrorism, stopping bloodshed in Ukraine, and seeking a settlement of the seemingly intractable Syrian crisis. Their dedication to service to their country is above politics, and it inspires me to the core. It is my standard.

No negotiation is worth throwing your own people and country under the bus.

Jon Weaver, who served as Huntsman’s campaign strategist when he ran in the 2012 presidential election, called on the former governor to resign.

@JonHuntsman Resign, if you have any honor.

I do find it pretty noteworthy in the Huntsman letter that people in government are now openly saying that they are staying because leaving their job in the hands of Trump would be a catastrophe. I presume then that those people will all be vocally opposing his re-elect.

For if you believe a President is so dangerous and unhinged that you can’t even entrust them with the pedestrian task of appointing diplomats, the natural consequence of that would seem to be unequivocal support for removing them from office, no?

“I have taken an unscientific survey among my colleagues, whom you reference, about whether I should resign,” Huntsman wrote in response to Gehrke. “The laughter told me everything I needed to know. It also underscores the fragile nature of this moment.”