US and China reach a “phase one” trade deal 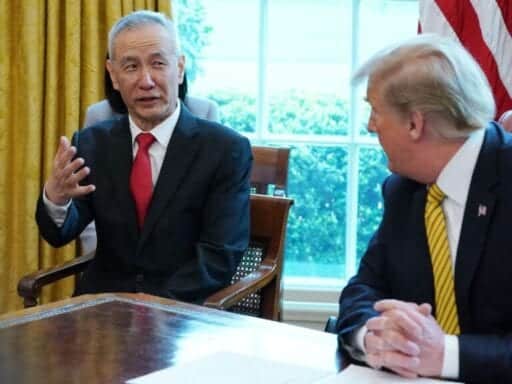 President Donald Trump announced an agreement to delay tariffs and for China to buy agricultural products, though negotiations will continue for a more substantive deal.

The US and China struck a partial trade deal on Friday, reaching a truce in their months-long trade war that’s rattled global markets and put President Donald Trump under pressure at home.

Trump announced Friday that the two sides agreed on a “substantial phase one” of a trade deal after meeting with Chinese negotiators at the White House.

Details about this agreement are still emerging; Trump himself said specifics would be written out over the next few weeks. Detentes in the trade war with China have happened before only for frictions — and tit-for-tat tariffs — to tick up again, but there seems to be some reason for cautious optimism. At least the markets think so.

According to what we know so far about the deal, the US has agreed to stop a planned increase of 25 to 30 percent in taxes on $250 billion in Chinese goods, slated to go into effect next week.

China also made some concessions, including agreeing to buy $40 million to $50 million in US agricultural products. While that could be a boon to American farmers who’ve been hit very hard by Trump’s trade spat with Beijing, the details of what products and how and when China will purchase them haven’t yet been made public. According to the president, China also has committed to opening itself more to US financial services.

Trump’s “phase one” trade deal with China, then, looks fairly superficial at first blush and doesn’t come close to fully resolving the trade dispute or eliminating $360 billion in tariffs already in place. It definitely doesn’t address some of the major issues, like forced technology transfer and currency manipulation, that are much knottier and complex to solve.

But what this “phase one” trade deal does do is remove the immediate financial pressure from the additional tariffs expected this week, and may ease some of the immediate worry about the effects of the US-China spat on the global economy.

The agreement is also designed to lay the groundwork for a more substantial and comprehensive trade deal with China in the coming weeks. Negotiators are expected to meet again in five or six weeks, but Trump and Chinese President Xi Jinping may formalize this phase one deal when the two leaders meet in Chile for a summit next month.

Trump teased the potential of a breakthrough with China on Thursday, tweeting, “Big day of negotiations with China. They want to make a deal, but do I?”

Big day of negotiations with China. They want to make a deal, but do I? I meet with the Vice Premier tomorrow at The White House.

It’s a good bet that Trump really did want that deal as he’s heading into an election season and a brewing impeachment battle. Getting tough on China was one of Trump’s signature campaign promises. Trump also wants to run on a strong economy, and his trade war with Beijing was putting strain on the US — and global — economy.

As he faces pressure from Congress over the Ukraine scandal, he’s seemed more determined than ever to show his base he’s following through on his agenda, whether or not it’s true. But, at least for now, this “phase one” US-China trade deal is a start.

Brexit is here. But what happens next?
Here’s why you can’t play Fortnite’s new season on your iPhone
Trump turns once and for all against Republicans who won’t help him steal the election
Sean Connery, legendary actor known for his role as James Bond, dies at 90
Americans increasingly believe Russia meddled in the 2016 election
Joe Biden is already facing an ally problem