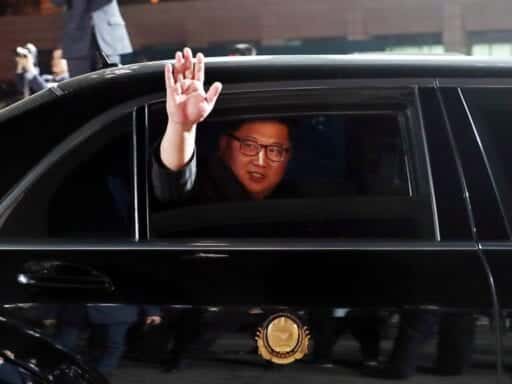 The Washington Post reports that satellite imagery indicates Kim Jong Un might not be so into the idea of denuclearization.

US intelligence agencies say North Korea is making new missiles, another sign that leader Kim Jong Un is uninterested in dismantling its nuclear program despite negotiations with the Trump administration.

The Washington Post’s Ellen Nakashima and Joby Warrick report that satellite imagery indicates that North Korea is working on one — or maybe two — liquid-fueled intercontinental ballistic missiles at a research facility outside of Pyongyang. This is the same research facility where North Korea constructed its Hwasong-15 missile, perhaps the most powerful missile in North Korea’s arsenal, which experts believe is capable of hitting the East Coast of the United States.

Satellite imagery from the National Geospatial-Intelligence Agency suggests that North Korea is doing “ongoing work on at least one Hwasong-15,” according to the Post.

Signs of some North Korean missile-building comes just a few days after North Korea returned the remains of US soldiers who died during the Korean War, which some observers interpreted as a positive gesture on the part of Kim when it came to negotiations about giving up its nuclear weapons program.

Secretary of State Mike Pompeo assured lawmakers last week during a Senate hearing that North Korea was making progress toward denuclearization, but conceded that the country was still producing “fissile material.” Pompeo would not say in an open setting whether North Korea was making new missiles or still trying to advance its nuclear program.

Trump declared the North Korean threat over soon after he returned from his June 12 summit, but there have been a few signs that the president’s victory lap on North Korea was premature. Reports in June suggested North Korea was increasing its nuclear fuel, which Pompeo’s testimony appeared to confirm.

Another report in June, in the Diplomat, said North Korea was still making support equipment and launchers for its missiles. Kim reportedly stood up Pompeo on a recent trip in early July. Even Trump, despite his public assurances, is reportedly perturbed about the lack of progress around North Korean denuclearization.

The Washington Post noted another sign that North Korea isn’t being totally transparent with the Trump administration: Senior North Korean officials are reportedly talking about juicing the numbers on their nuclear stockpile in an attempt to avoid giving up all their weapons. In other words, they’d destroy weapons or nuclear sites and try to claim they gave up everything, while hoarding a stash and presumably deceiving weapons inspectors.

North Korea has returned hostages and the soldiers’ remains. It’s also fulfilled its promise to dismantle one of its missile testing sites, though as Vox’s Alex Ward wrote, it’s possible that the country no longer needs the site for research anyway. If that’s the case, North Korea’s overtures toward the US have been low risk — North Korea doesn’t have to give up much and manages to allow Trump to save face. Meanwhile, Washington has given up the major concessions of halting US-South Korea military exercises.

“That the regime could return 55 remains so quickly confirms that it has been holding them to serve as negotiating bargaining chips. Some reports suggest North Korea has held hundreds of remains for decades,” Bruce Klingner, a former top CIA official in the Koreas and now an expert at the conservative Heritage Foundation, told Alex Ward after Kim returned the soldiers’ remains last week. “North Korea has not, however, taken any steps to begin denuclearization as it promised to do.”

All of this supports what North Korean observers have been saying before and since Trump’s summit: Denuclearization probably doesn’t mean the same thing to Trump and Kim.

E-girls and e-boys, explained
Watch: In Wonder Woman 1984’s new trailer, Diana and Cheetah go head-to-head
Can monoculture survive the algorithm?
Experts worry Trump revealed US secrets when he tweeted a photo of an Iranian launch site
4 winners and 4 losers from Biden’s climate leader summit
How to go out and not spread coronavirus this summer