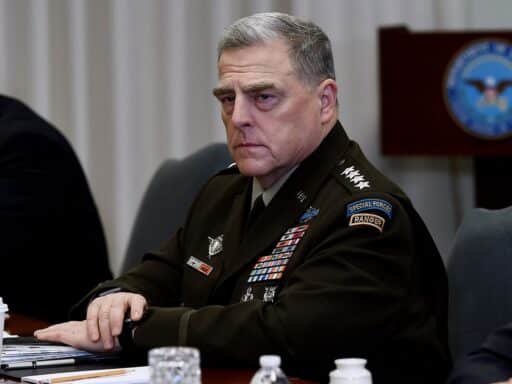 This is a remarkable statement by the Joint Chiefs of Staff.

In a statement sent out to the entire US military, all eight members of the Joint Chiefs of Staff condemned the Capitol insurrection — incited by the current commander in chief — and warned service members not to do anything to impede President-elect Joe Biden’s inauguration.

Top military officials prefer to stay out of anything tinged with politics. For one to say something after last week’s event would be noteworthy and rare enough. For all eight Joint Chiefs to speak out together — in a “message to the Joint Force,” no less — shows just how perilous they deem this moment to be.

“The violent riot in Washington, D.C. on January 6, 2021 was a direct assault on the U.S. Congress the Capitol building, and our Constitutional process,” the letter signed by all the Joint Chiefs reads. “We witnessed actions inside the Capitol building that were inconsistent with the rule of law. The rights of freedom of speech and assembly do not give anyone the right to resort to violence, sedition and insurrection.”

While that may be a general statement about the insurrection meant more for the public, the next section was clearly meant for the troops they help lead.

“As Service Members, we must embody the values and ideals of the Nation. We support and defend the Constitution,” they wrote. “Any act to disrupt the Constitutional process is not only against our traditions, values, and oath; it is against the law.”

“President-elect Joe Biden,” they concluded, “will be inaugurated and will become our 46th Commander in Chief.”

“The violent riot in Washington, D.C. on Jan. 6, 2021 was a direct assault on the U.S. Congress, the Capitol building, and our Constitutional process.” — Message to the Joint Force from Joint Chiefs Chair Gen. Mark Milley and the rest of the Joint Chiefs. pic.twitter.com/coIh9yqEpI

There are likely two main reasons why Joint Chiefs Chair Army Gen. Mark Milley and the seven others felt the need to pen the letter.

First, veterans and possibly even some active-duty troops were allegedly involved in the attack on the Capitol last week. That means the military community certainly contains people who wrongly believe the presidential election was stolen, subscribe to the QAnon conspiracy theory, or have far-right tendencies.

Regardless of their passions or views, military leaders aim to keep the armed services as apolitical as possible. Otherwise, some might associate the military with one party or another, and that isn’t healthy for a democracy.

Second, the Joint Chiefs tend to speak out when something really egregious has happened, and there’s no question the Capitol insurrection fits the bill. “[T]hey have developed a finely tuned ‘political’ (small p) radar on when to weigh in,” CNN Pentagon correspondent Barbara Starr tweeted on Tuesday.

For example, after President Donald Trump said some attendees at the 2017 far-right rally in Charlottesville were “very fine people,” all the Joint Chiefs spoke out against racism and bigotry. “The Army doesn’t tolerate racism, extremism, or hatred in our ranks. It’s against our Values and everything we’ve stood for since 1775,” Milley, who was chief of staff of the Army then, said at the time.

Based on this letter, it looks as though America’s top military officials won’t tolerate another thing: the attempted overthrow of American democracy by force.

New “call a senior” programs are sparking unexpected friendships during quarantine
America has never embraced bidets. The toilet paper shortage could change that.
Mike Bloomberg and his billions are what Democrats need to beat Trump
The many places you can buy Beyond Meat and Impossible Foods, in one chart
Wonder Woman 1984 has been postponed until August 14
A White House order to keep masks in the US masks could limit supply, companies warn