US National Guard chief: “The climate is changing. I don’t know why.” 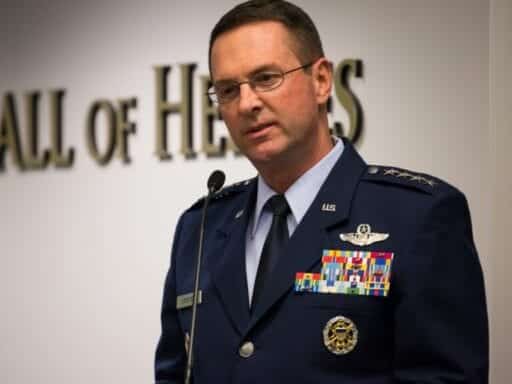 The general sat down with reporters to talk about the National Guard’s Hurricane Michael response. He told us a lot more.

The head of the US National Guard, one of the top military officers in charge of responding to hurricanes and other disasters affecting the United States, claims he does not know why the climate is changing. What’s more, he has yet to discuss the threat climate change poses to Americans with President Donald Trump.

Those are the main takeaways from a conversation reporters had on Friday with Air Force Gen. Joseph Lengyel, a member of the Joint Chiefs of Staff. In a session organized by George Washington University, Lengyel discussed the National Guard’s response to Hurricane Michael, which has devastated areas from Florida’s Panhandle to Virginia and killed 13 people this week.

But when I asked if he thought climate change contributed to the intense hurricanes and the ensuing disasters the National Guard has dealt with in recent years, he demurred.

The storms “seem to be happening quite frequently — I’m not sure why,” Lengyel said. “I believe the climate is changing. I don’t know why,” he continued. “There’s a lot of storms coming our way. Whatever the reason, we have to be ready to deal with them.”

To be clear, scientists are in agreement that in a warming world, hurricanes will become more intense, carry more rain, and cause worse coastal flooding. But there’s no simple explanation for the number of hurricanes that can form in a given year.

When pressed on whether he’s spoken to Trump or other people at the Pentagon about the security threat climate change poses to Americans, he said, “No, I have not.” I then asked if he’d like to have that conversation with President Trump. Lengyel responded: “Not particularly. The president is well aware that the storms are coming.”

Last year, the US suffered through three major hurricanes — Harvey, Irma, and Maria — which in total killed thousands of Americans, mostly in Puerto Rico. And overall, storms, fires, floods, and heat caused at least $306 billion in destruction last year.

It “doesn’t seem like it’s ever over now,” Lengyel said of hurricane season. But he didn’t expand on why that might be.

It’s a disturbing sentiment coming from one of the most senior officials responsible for preparing for and responding to hurricanes, wildfires, floods, and other natural disasters affecting the US at a time when it’s clearer than ever that climate change makes us more vulnerable to these events.

Still, Lengyel’s National Guard has roughly 3,700 troops dealing with Hurricane Michael, with many more in position to help. They’ll find hidden casualties, remove debris, and airlift people who are stuck, among other things. The problem with Lengyel’s comments, then, is not that the National Guard isn’t ready for Hurricane Michael operations, but that they will likely have to deal with further devastation because of more powerful storms fueled by a changing climate.

One of Lengyel’s aides told me after the session that no one had prepared the general for questions about climate change beforehand.

Lengyel’s words come as a bit of a surprise. For years, the Pentagon has said climate change is a security threat in part because it could make it harder for troops to operate out of US military bases. In fact, Lengyel said during the interview that “100 percent of the housing” at Tyndall Air Force Base in Florida — which suffered massive damage from Hurricane Michael — is currently “uninhabitable.”

The Pentagon’s video below shows the destruction at Tyndall from Hurricane Michael:

During his confirmation hearing in January 2017, Defense Secretary James Mattis told the Senate Armed Services Committee that climate change would make the world less stable and require the entire government to curb it.

Trump, however, doesn’t consider climate change a national security threat. His National Security Strategy released last December doesn’t mention a changing climate at all. That may be why Lengyel is trying to stay clear of the issue as it relates to the president.

And while it’s hard to know if any particular storm was directly caused by climate change, there’s no question that it will make hurricanes and other extreme weather events even worse.

It would be nice if the general who sends thousands of troops into harm’s way to deal with the aftermath of these storms would acknowledge that.