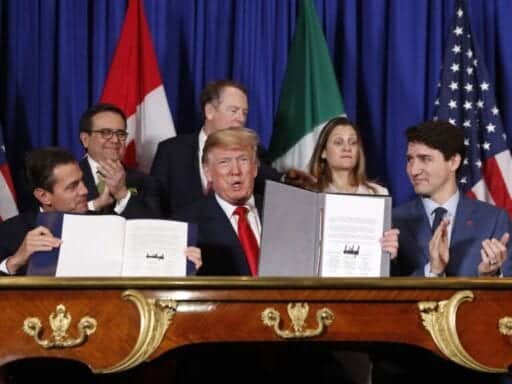 Share
Loading...
The leaders of the United States, Mexico, and Canada sign the USMCA on November 30, 2018, at the G20 summit in Buenos Aires, Argentina. | Pablo Martinez Monsivais/AP Photo

A brief guide to the trade deal between Canada, Mexico, and the US.

During his 2016 presidential campaign, Donald Trump promised to renegotiate NAFTA, which he called “the worst trade deal ever made.” As president, he did so. The result is the USMCA, which the leaders of the three countries signed in November 2018.

Here’s a brief overview of what’s in it:

In June 2019, Mexico became the first country to ratify the deal. But in the US, Democrats on Capitol Hill refused to sign on to the deal without stronger enforcement of labor provisions, stricter environmental protections, and other changes.

House Democrats formed a working group to work with the administration on those demands. (As for Canada, it was mostly waiting for the US to get its act together before it took up the deal.)

In December, they announced they’d reached a revised USMCA deal with the Trump administration that included most of the updates they wanted. One big one was a “rapid-response mechanism” that calls for an independent, three-person panel of multinational, independent experts who will make sure Mexico is abiding by its union rules and other protections.

The revised version won the support of Richard Trumka, president of the AFL-CIO, the largest federation of labor unions in the United States, who had initially opposed the deal. Environmental groups still say it doesn’t go far enough, though, and some unions are still opposed.

But it was good enough to gain bipartisan support in the House. On December 19, the USMCA passed the House with a vote of 385 to 41.

Now it heads to the Senate. Majority Leader Mitch McConnell (R-KY) has said lawmakers will consider it after Trump’s impeachment trial in January — though he said this before House Speaker Nancy Pelosi suggested she might delay sending the impeachment articles to the Senate.

Even in the Senate, though, the bill is expected to get rare bipartisan backing. Canada hasn’t ratified the deal yet, and likely won’t consider it until the new year. But if the USMCA gets through Congress, Canada will likely pass it, too.

One year ago, Botham Jean was killed in his home. The ex-officer who shot him is about to go on tria...
Apple fires back at Epic Games in the latest legal wrangling over Fortnite
Mitch McConnell’s impeachment trial strategy, explained
Cyclist gives Donald Trump the middle finger
Why tigers get coronavirus but your dog will be fine
“These Media Posts will serve as notification”: Trump’s dangerous Iran tweets, briefly explained