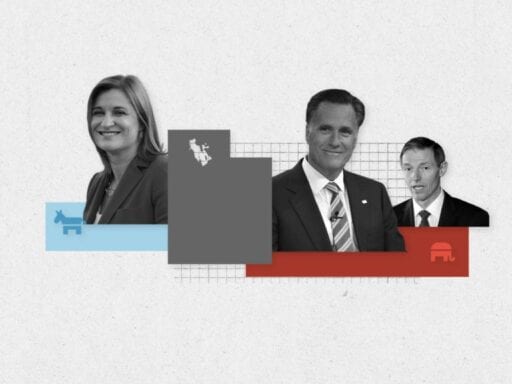 All eyes are on Mitt Romney.

Mitt Romney’s much-anticipated comeback is the focal point of Tuesday’s Senate primary. Romney has made headlines in recent weeks for softening his position toward President Donald Trump, who he’s previously slammed as a “con man” and a “fake.”

The former Massachusetts governor and Republican presidential nominee is widely expected to sail to victory on Tuesday.

The state’s polls close at 8 pm Mountain Time. Live results are below, powered by Decision Desk.

It’s notable, however, that Romney didn’t win the Republican Senate nomination outright. Utah has a weird system where candidates are first voted on in a state party convention; Kennedy, who has tried to paint Romney as a Massachusetts “carpet-bagger,” actually beat Romney in two rounds of voting among delegates at the Utah Republican Party’s state convention. Even so, Romney, a Mormon political leader, has deep ties to the state, and is “royalty” for many, Utah’s Lt. Gov. Spencer Cox told Vox.

Utah is a uniquely red state. It has both an anti-establishment streak that elected Sen. Mike Lee (R-UT) and strong establishment ties, which Hatch, and Romney, largely represent. The voters have no patience for Trump’s Twitter antics or “locker room talk” — there was even a slight decline in Mormons affiliating with the Republican Party during Trump’s nomination.

That said, it remains solidly red.

Bloomberg’s first TV interview showed him to be exactly who progressives feared he was
Trump’s tweets about saving the “Suburban Lifestyle Dream,” explained
“This could be a massive disaster”: What happens if the coronavirus hits China’s internment camps?
UK Parliament gives Boris Johnson his second defeat in 2 days
House Democrats deny Republicans’ request for whistleblower testimony
Google’s former CEO hosts an exclusive retreat in Yellowstone each July. You won’t hear much about i...