Vaping is still safer than smoking. That message is getting dangerously muddled. 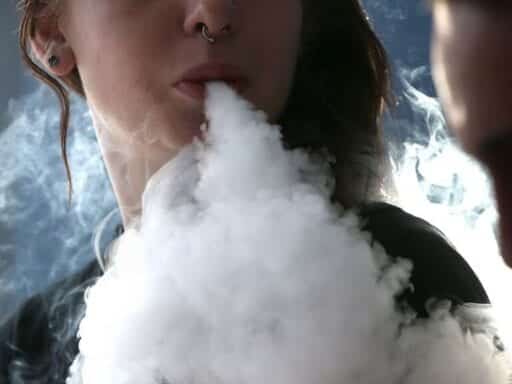 Share
Loading...
Tobacco kills up to half of its users, which is why cigarettes are considered the deadliest consumer product ever introduced to the market.

A survey found the number of people who think vaping is as harmful, or more harmful, than smoking keeps growing.

Amid the many controversies about vaping’s health effects, there’s one thing public health experts agree on: E-cigarettes are less harmful than regular cigarettes. Tobacco kills up to half of its users, which is why cigarettes are considered the deadliest consumer product ever introduced to the market. Even with the uncertainty about vaping’s long-term risks, researchers have found that vapers are exposed to fewer toxins and carcinogens than cigarette smokers.

There was also a rise in the number who believe vaping is more harmful or much more harmful than smoking, from 2 percent to 4 percent between 2017 and 2018.

The trend held even among current and former smokers — a group that might benefit from switching to vaping. That’s concerning, said Amy Nyman, lead author of the study and research associate in the School of Public Health at Georgia State University, in a statement. “Smokers who perceive too much risk from e-cigarettes may decide against using them to quit smoking and may instead continue with their combustible smoking habit.”

“Smoking itself is literally the most harmful thing anyone can do,” Michael Eriksen, a co-author on the paper and the founding dean of the School of Public Health at Georgia State, told Vox. “For the public to equate [e-cigarettes and cigarettes] and see [vaping] as more harmful than smoking is really surprising.”

This survey data was collected before the outbreak of vaping-related lung disease, which, as of November 20, has sickened more than 2,000 people and killed 47 across the US. Though cases in the outbreak have now mostly been linked to THC vape products, “If this survey were to be done again, it would probably be shocking in terms of even more negative perceptions,” Eriksen added.

How the public health message about vaping became so muddled

Now, the question is: Why is the e-cigarette public health message so muddled? The researchers had a few ideas about that.

Separately, the regulatory discussion around vaping has centered on banning certain e-cigarette products, or as the American Medical Association recommended this week, banning vaping products all together, “with the exception of those approved by the FDA for tobacco cessation purposes and made available by prescription only.” In these stories — about severe short-term risks and crackdowns — accurate public health messages about the long-term benefits of e-cigarettes for smokers, for example, can easily get lost.

Ideally, the public would understand that non-tobacco users should never vape. Vaping, while safer than smoking, carries health risks and the long-term harms still aren’t known. “These products are not safe. They are harmful. If you’re not a user currently you should never use them,” Eriksen said.

There’s a second message for smokers: they might consider switching to vaping to reduce their risk of tobacco-related disease. Again, that’s because of the overwhelming evidence that vaping is safer than smoking. For example, a National Academies of Sciences, Engineering, and Medicine 2018 report on e-cigarettes analyzed the findings of 800 peer-reviewed studies. “There is conclusive evidence,” the report stated, “that completely substituting e-cigarettes for combustible tobacco cigarettes reduces users’ exposure to numerous toxicants and carcinogens present in combustible tobacco cigarettes.”

I was food insecure for years. Affluent people finally understand a little of what it’s like.
2020 Democrats on who controls your data — and who’s at fault when it’s mishandled
How to read a very long book
Mitch McConnell outlines what a second Trump impeachment trial might look like
Trump wants US troops out of Iraq, but says Iraq would face sanctions for expelling them
How the ultra-wealthy could try to cut in line for the Covid-19 vaccine