Venezuelan President Maduro is severing diplomatic ties with the US 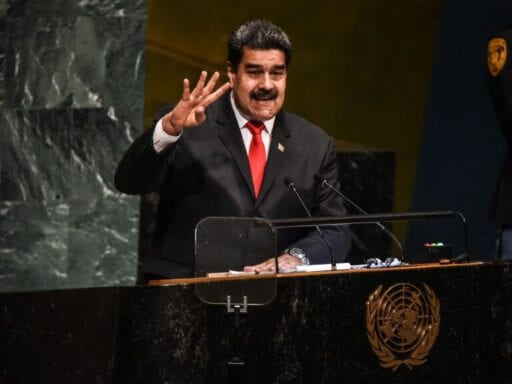 He also gave US diplomats 72 hours to leave Venezuela.

In a Wednesday statement outside his palace in the Venezuelan capital of Caracas, Maduro — a socialist dictator — officially broke off diplomatic ties between the US and his country. American diplomats now have 72 hours to leave Venezuela, and it’s unclear if Maduro will ensure they can depart safely.

But hours later, Secretary of State Mike Pompeo said the US would defy Maduro’s order.

Still, Maduro’s move is a clear response to Trump’s decision earlier on Wednesday to recognize Juan Guaidó as Venezuela’s interim president. The leader of the country’s legislative body, Guaidó has called Maduro a “usurper” and said Wednesday that he would assume the duties of the presidency.

Guaidó, along with the Trump administration and a number of other international observers, argue that Maduro isn’t the rightful president of the South American nation, and that last May’s presidential election was rigged so that the dictator could win a second six-year term.

Citing Venezuela’s constitution, Guaidó and others say the sham vote means that he, as the head of the National Assembly (the country’s legislative body), is the rightful — albeit temporary — leader of the country since there’s no legitimate president. Guaidó also incited Wednesday’s country-wide protests to compel Maduro’s resignation by showcasing the rampant displeasure for his leadership.

It’s unclear what happens next

Maduro’s announcement shows that tensions between Washington and Caracas are high — and that they’ll probably increase.

One US official told me there’s a chance the United Nations will hold an emergency session to discuss who the rightful leader in Venezuela really is. Should the international body side with Maduro, it would be a huge blow to local and global efforts to depose the dictator. But should the organization side with Guaidó, it would prove a massive rebuke of Maduro — a big complication.

Maduro, for his part, has shown no signs of abdicating his office, saying on Wednesday that “no one here is surrendering.” And with the military and much of the country’s major institutions on his side, there is little incentive for Maduro to step down.

This means the embattled leader can still kick out US diplomats and more — until someone decides to stop him. At the White House on Wednesday, Trump said “all options are on the table” should Maduro refuse to resign.