Video: Thai boys didn’t swim out of the cave; they were rescued on stretchers 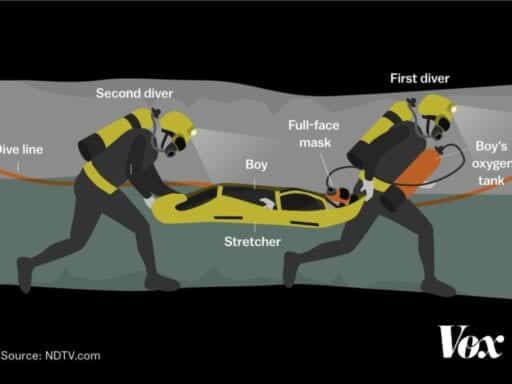 New information suggests the 12 Thai boys trapped in a cave were medicated and carried out on stretchers during the rescue operation.

Now that the 12 Thai boys and their soccer coach are safely out of the cave where they were trapped for just over two weeks, we’re learning more details on how the rescue mission was carried out.

Up until Wednesday, Vox — and other news outlets — were reporting that the boys swam out of the cave, accompanied by professional divers. Over the weekend, rescue officials had been telling reporters that divers were teaching the boys to swim and to use diving equipment.

But on Wednesday afternoon, a day after the mission was completed, the Thai Navy SEALs posted a video to Facebook that suggests the boys did not swim, but instead were fitted with dive masks, and put on stretchers that were guided through the passageways by the divers:

The operation the world never forgets.

The Thai prime minister also said on Tuesday the boys were given an anti-anxiety medication as part of the rescue.

A former Thai Navy SEAL involved with the operation, Commander Chaiyananta Peeranarong, told AFP on Wednesday that the boys were “sleeping or partially-conscious as they were passed from diver-to-diver through the cave.”

”Some of them were asleep, some of them were wiggling their fingers… [as if] groggy, but they were breathing,” Commander Chaiyananta Peeranarong said. “My job was to transfer them along,” he said. He added that the “boys were wrapped up in stretchers already when they were being transferred” while doctors posted along the 2.5-mile long escape route checked them along the way.

There are conflicting reports of how much and what kind of medication given to the boys to keep them calm or knock them out for the operation. CBS reported that the boys were given only anti-anxiety medication, but AFP’s source said some of the boys were fully sedated.

But Thai prime minister on Tuesday denied the fact that the boys had been completely sedated: “Who would chloroform them? If they’re chloroformed, how could they come out? It’s called anxiolytic — something to make them not excited, not stressed.”

The BBC also outlined the different reports on the extent to which the boys were medicated:

Sources in the rescue operation, including divers who took part, told the BBC that the boys were heavily sedated ahead of the rescue to prevent them panicking in the dark, narrow, underwater passageways.

They were then strapped to one of two rescue divers tasked with shepherding each boy through the underwater parts of the system, and bundled into stretchers to be carried through the dry parts.

Several sources have since confirmed that the boys were only partially conscious as they were brought out.

One reason the narrative of the rescue mission has changed is that rescuers seemed to have changed the plan, but were told not to give out information while the risky rescue was still underway. A British diver involved with the mission who asked not to be named told Vox on Monday he wouldn’t be able to give us details until the rescue was over. (Vox has still not been able to reach him.)

But the new information that emerged today has given us a better peek behind the watery curtain.

Glossier, the most-hyped makeup company on the planet, explained
Read Fiona Hill’s scathing opening statement in the impeachment hearings
Anderson Cooper calls Trump’s Helsinki performance “disgraceful”
Omarosa recorded John Kelly in the situation room — and she’s got the tapes to prove it
The Morning Show’s producers say many of its critics are “Apple haters”
Everything you need to know about the next Democratic debate