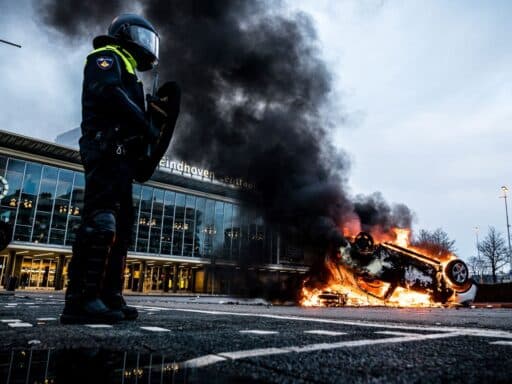 The rioters are a mix of anti-government groups and bored hooligans.

Violent protests have erupted in the Netherlands for the past three nights in a row, with rioters setting fires and clashing with police in defiance of strict coronavirus lockdown measures.

Nearly 500 people have been arrested in cities across the country since the protests began over the weekend, including more than 180 who were arrested Monday night. Riots took place in bigger cities like Amsterdam and Rotterdam, but also in smaller cities across the country. Rioters violated the 9 pm curfew, and looted businesses, set fires, and threw rocks at buildings and at police.

“These are the largest riots in 40 years,” Laura Groenendaal, a research and projects manager at the German Marshall Fund, based in Houten, Netherlands, told me. “Normally we say that the Netherlands are blissfully boring, so this is, of course, the complete opposite.”

The Netherlands has been under stay-at-home orders for weeks, with nonessential businesses closed and limits on gatherings. In early January, Dutch Prime Minister Mark Rutte extended the lockdown orders once again, citing concerns about the more virulent B.1.1.7 coronavirus variant first discovered in the United Kingdom.

And this weekend, the government enacted a 9 pm curfew through February 10 to help slow the spread of the virus, the first time since World War II that the country has imposed a curfew.

The rioters include anti-government groups and Covid-19 skeptics, but also criminals trying to exploit the chaos, and bored people — mostly young men — who’ve been cooped up inside and have now been unleashed. Police in Amsterdam said “football hooligans” were part of the crowds in that city, according to the Financial Times.

“All of these different things formed this toxic cocktail, and the announcement of the curfew, which started last Saturday, became the spark which made everything explode,” Groenendaal said.

The protests are widespread, and some smaller cities witnessed pretty dramatic violence over the weekend, including the southern city of Eindhoven, where rioters incinerated a car and looted a supermarket at the train station on Sunday. In Urk, in the central part of the country, rioters burned down a Covid-19 testing center.

Rutte called it “criminal violence,” and dismissed the idea that these protests were about freedom. “We must win the fight against the virus together, because only then can we regain our freedom,” he said Monday.

The country is preparing for more protests

The violence of these protests was a bit of a surprise, but Dutch officials and police are preparing for the unrest to continue.

Experts I spoke to said there is some dissatisfaction with the current government, particularly over the slow rollout of vaccinations in a country that otherwise has a pretty efficient health care system. The Netherlands was one of the last countries in the European Union to get the vaccine, and the pace of inoculation is still slow.

The Dutch government got decent marks for its handling of the coronavirus at the start of the pandemic, but it loosened restrictions over the summer, and at first didn’t advise mask-wearing and didn’t strictly enforce social distancing rules. Cases flared up again in the fall, and the Netherlands became one of the hardest-hit countries during Europe’s second wave.

That forced the government to introduce more stringent measures to slow the spread, closing down bars and restaurants in the fall, and shuttering nonessential businesses and schools in December. Cases have been declining, but the Dutch government has extended those measures and added the curfew to defend against the B.1.1.7 variant, which spreads far more aggressively.

Some opposition lawmakers on both the left and the right did criticize the curfew. Geert Wilders, a right-wing populist politician, said the curfew meant “losing freedom en masse and that is no fun.” But ultimately, enough lawmakers backed the measures.

The rioters represent a small and disparate slice of the public. How the rest of the country feels about the lockdown measures, and the Dutch government’s handling of Covid-19, will probably be clearer in a few weeks, as the Netherlands is holding general elections for its House of Representatives in mid-March.

Rutte and his party, the People’s Party for Freedom and Democracy, has remained pretty popular. But an unrelated scandal having to do with child welfare benefits forced the collapse of the Dutch governing coalition earlier this month. Rutte, who is a member of the largest governing party, is staying on until the elections as caretaker minister. But taken together, the pandemic, the vaccination hiccups, and the welfare scandal have created a sense of weariness.

“I think it’s more kind of general malaise,” Harvey Feigenbaum, a professor of politics and international affairs at George Washington University, told me. “The government’s been in power for a long time, and even though the party of the prime minister is probably still the most popular party in the Netherlands, I suspect there’s a certain amount of fatigue,”

Report: Brett Kavanaugh racked up thousands in debt buying baseball tickets
The Supreme Court just backed away from one of its cruelest death penalty decisions
Justice Department now says its email accounts were “potentially accessed” in Russia hack
Robert Mueller wants to question the “Manhattan Madam”
The top 3 foreign policy moments of the first Democratic debate
Trump has the authority to launch nuclear weapons — whether Pelosi likes it or not