Violent protests are not the story. Police violence is. 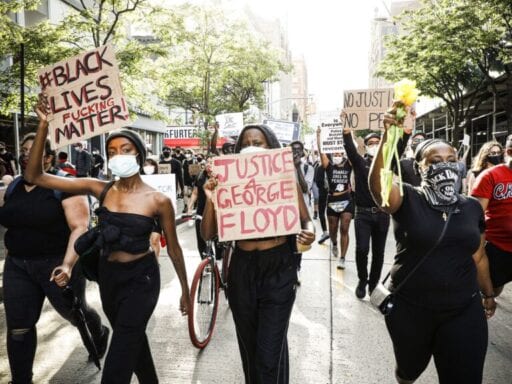 Share
Loading...
Protesters demonstrate in Brooklyn, New York on May 29 in response to the death of George Floyd. | John Lamparski/NurPhoto/Getty Images

The protests will eventually end. But state-sanctioned violence against black Americans won’t.

The protests over George Floyd’s killing by a white police officer have spread from Minneapolis across the country, revealing the pent-up anger over institutional racism nationwide.

In a way, this is not anything new. For all of America’s history, black people have been subjected to violence at the hands of the state, or agents of the state, or members of the white majority. Mass demonstrations against state violence have also been a fixture of US politics, from the civil rights movement to Ferguson, Missouri, to today. The scenes from Minneapolis, Atlanta, and Brooklyn last night are just the latest chapter in that story.

And yet, already, the protesters’ legitimate grievances are being subsumed by political leaders and others questioning whether they are registering their anger appropriately. This is also a pattern in these moments: the demonstrations, so visible and visceral in the news coverage, become the story. The structural problems being protested start to fade into the background.

You can hear this pivot in President Donald Trump’s comments that protesters who showed up outside the White House on Friday night “had little to do with the memory of George Floyd.” He dismissed them as paid organizers.

The professionally managed so-called “protesters” at the White House had little to do with the memory of George Floyd. They were just there to cause trouble. The @SecretService handled them easily. Tonight, I understand, is MAGA NIGHT AT THE WHITE HOUSE???

But that’s wrong. Of course the protests are about George Floyd’s death. Political leaders fear violence at the protests — and any destruction of property or bodily harm is, of course, worrisome — but their concerns actually demonstrate the fundamental asymmetry that the protesters are pushing back against. The state has a monopoly on legitimate violence, and it is often directed at young black people like George Floyd, Breonna Taylor, Eric Garner, Michael Brown, Tamir Rice — the list goes on. When they die, the police officers responsible too frequently face no repercussions because they are protected by the law. If the men who killed George Floyd go to prison for their actions, they will be exceptions that prove that longstanding rule.

Yet if the anger and frustration from centuries of racial oppression causes a peaceful protest to become “violent” — and most of the reported attacks have been directed against property, not people, though one man was tragically killed in Detroit — suddenly that other kind of violence becomes the dominant story so far as political leaders are concerned, a disruption to the natural order that must be corrected. The systemic racism that has led to so many black lives being cut short becomes secondary.

But it shouldn’t, because that’s the real problem America must grapple with. Otherwise, sooner or later, this will all happen again.

The racial prejudices of US criminal justice are well documented

In almost any way you measure it, the American criminal justice system is prejudiced against black Americans, and black people are much more likely to be subjected to state-sanctioned violence in the US compared to white Americans.

Researchers from Rutgers University, the University of Michigan, and Washington University in St. Louis tried to quantify the risk to black lives from law enforcement in a recent study. Their findings were stunning: black men, by far the most at-risk group, face 1 in 1,000 odds of being killed by the police over the course of their lives.

This chart succinctly summarizes the researchers’ findings of the risk across different races and genders:

But that is only the most extreme form of discrimination. In ways both big and small, the criminal justice system is biased against black citizens. Radley Balko runs through much of the relevant research in a 2018 column in the Washington Post. Here is just a selection of the findings in the studies he cited:

The list could go on. But the point is made. Racial discrimination is pervasive in American criminal justice, manifesting in every step from arrest to trial to conviction and incarceration. George Floyd’s killing is, sadly, only an extreme example of how the state exerts its power over black Americans. That is what the people protesting his death want to change.

And, of course, it’s not just America’s institutions that are racist. So are some of its white people, as in the vigilante killing of Ahmaud Arbery in Georgia. Black people deal with the kind of suspicion that led to Arbery’s death all the time: 65 percent of black people said in a recent Pew poll that somebody had acted suspicious toward them because of their race. Just 25 percent of white Americans said the same.

Those figures suggest a deep level of persistent prejudice. It is difficult to quantify racist attitudes, because many people usually don’t want to admit holding them. But a 2017 Pew Research Center survey provides a useful proxy: 54 percent of white Americans said that black people who can’t get ahead are mostly responsible for their own condition, while just 35 percent blamed racial discrimination. Among black Americans, the numbers flipped: 59 percent cited racial discrimination while 31 percent said people were responsible for their own problems.

If you want to understand the different worldviews of the protesters and the people who criticize the demonstrations for getting out of hand, that data is a good place to start.

Among the other studies in Balko’s summary of the research on racism in US criminal justice were several that found black Americans were less likely to have their complaints against law enforcement officers sustained compared to complaints by white people. That was especially true for complaints of excessive force.

And there is a long track record that shows how rarely police officers are arrested, much less convicted, when they kill somebody in the line of duty. In 2014, amid the furor over the killing of Michael Brown in Ferguson, I reported for Talking Points Memo on new research that analyzed homicides committed by law enforcement. The authors found that from 2006 to 2011, 41 police officers were arrested for murder or negligent homicide in the line of duty — while, over the same period, more than 2,700 “justifiable” homicides were committed by police officers.

So either US law enforcement are almost always justified in the most extreme use of force, or there are systemic obstacles to holding police officers accountable when they kill one of their constituents.

Given how rarely complaints about police violence are taken up and prosecuted by the same criminal justice system that enables those law enforcement officers, protests of the kind seen in Minneapolis and across the US are one of the few tools available to people who wish to register their opposition to these institutional prejudices. It’s a tradition that goes back years and reached its zenith during the civil rights era. The forceful displays of police violence shown through cell phone videos and social media have energized a new era of civil action, starting with the Ferguson protests and continuing today.

Many, maybe even most, of these protests remain nonviolent, it should be noted. They operate on a philosophy pioneered by Mahatma Gandhi and adopted by Martin Luther King Jr. in the United States: peacefully and publicly register one’s discontent with injustices and allow the response of the state, usually militant and sometimes violent, to speak for itself.

It can be difficult to maintain nonviolence across large groups, however, and it is not necessarily a surprise that huge demonstrations have resulted in some bad actors getting the attention. But before politicians seize on those incidents as representative of the entire movement against police violence, it should be noted that the public doesn’t yet know the full story. Minnesota officials stressed Saturday that they believe many of the violent protesters who were caught on news cameras, leading to comments like those made by the president, are not actually local residents.

That alone should be a warning against letting the protests overshadow the problem they are protesting. Sooner or later, these demonstrations will end. But the problem of America’s racist past and present will still be with us.