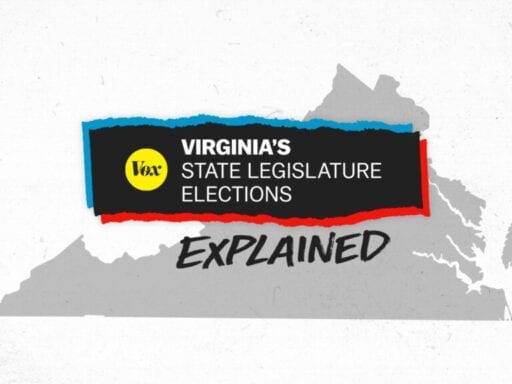 That said, they’re a bit of an oddity. The November 5 elections are happening in an off-year. That means there are no statewide offices like governor on the ballot — the elections for the House of Delegates and state Senate are the biggest races.

All seats in both chambers are up this year, and Democrats could be on the verge of winning a majority in each. They’re just two seats away from retaking the state House and Senate, but a shift in power could be particularly tricky in the House, where Democrats are defending a lot of territory.

In past off-years, turnout hasn’t been very high; there’s usually not a ton of interest in state legislative elections alone. But there may be a silver lining to not having Gov. Ralph Northam not on the ballot; both he and his lieutenant governor, Justin Fairfax, spent part of this year embroiled in separate scandals (Northam for blackface photos in an old medical school yearbook, and Fairfax for sexual assault allegations).

Even with state lawmakers being at the top of the ticket, Democrats and grassroots activists told Vox they’re seeing signs of more enthusiasm for voting than usual.

“I think the intensity going in is so strong,” said Tram Nguyen, co-executive director of New Virginia Majority, a group aiming to increase the diversity of the Virginia electorate by encouraging minorities and immigrants to vote.

The perceived interest in a normally sleepy election is part of what makes this an interesting test for Democrats and Republicans alike for 2020. For Republicans, it’s a test of whether they can hang onto power in a state that’s been trending blue for years. No Republican has won statewide office since 2009, yet they’ve clung to slim majorities in both chambers of the state assembly.

“It shows you the relative strength of the parties at this point in time without anybody at the top of the ticket,” Republican strategist John Feehery told Vox. “If you take away any personalities, it just gives you a glimpse with a natural setting of what the political barometer is.”

Virginia Democrats are hoping for another 2017 election cycle

The 2017 election year was very good for Virginia Democrats, and was an early sign of what was to come nationally in the 2018 midterms. Coming off of 2016, pollsters had been cautious about making any definitive predictions about Virginia.

Democrats won the governor’s seat in 2017, and although they didn’t win a majority in the House of Delegates, they captured 15 seats and came a lot closer than pollsters had predicted. The key groups that came out that year — and that Democrats are hoping come out again in 2019 — were young voters, and non-white voters.

“We need this year to look like 2017 as much as it possibly can,” said Democratic pollster Joshua Ulibarri, who works for Lake Research Partners and has been surveying Virginia districts in the run-up to both election years. “If that happens, Democrats are in good shape.”

Ulibarri shared some polling numbers with Vox showing that motivation to vote among voters in several key districts in the run-up to 2019 is higher than it was in 2017.

“Democrats are as or more motivated to vote than Republicans this year and motivation is up this year compared to the 2017 election,” Ulibarri said, calling that bump “remarkable” considering these elections are just for the state legislature. “These races literally have state legislature at the top of the ballot and some of these seats, because of how they were drawn, have been uncontested for years.”

Despite lackluster fundraising and being outspent by Republicans in past years, Democrats have boosted their spending in Virginia state legislative races by quite a bit. The Democratic Legislative Campaign Committee announced they’d spend $1 million back in December, and Democrats will commit nearly $2 million into the races by the end of the cycle. Outside groups including Emily’s List, Everytown for Gun Safety, Forward Majority, and the League of Conservation Voters are also spending.

Democrats especially have their eye on the state Senate, where they are challenging a number of Republican incumbents. It could be a bit harder to win the state House of Delegates; a slew of Democratic incumbents elected in 2017 are on the ballot as well. But overall, Democrats are feeling cautiously optimistic.

“I would say I’m less nervous [than 2017], but at the same time I’m not going on the record right now saying Democrats are going to flip both chambers,” said Carolyn Fiddler, the communications director for progressive group Daily Kos and a former DLCC spokesperson.

The policy stakes of the Virginia legislature elections are high

Even though Virginia passed Medicaid expansion last year when a handful of Republicans decided to support the provisions, health care still ranks as a top issue for many Virginia voters.

Voters are still frustrated with the high cost of prescription drugs, and Democrats want to have majorities to fight back against Republican bills that would allow insurers to not cover those with preexisting conditions.

“They’re still feeling like there’s a heavy expense for prescription drugs, and they want to know how you’re going to try to get some of these costs down,” Virginia state Delegate Lashrecse Aird (D), who represents a predominantly minority district, told Vox.

Another huge issue that has come up both in Aird’s community as well as around the state is the issue of gun violence. In June, Northam called a special legislative session to address gun violence after a mass shooting in Virginia Beach claimed the lives of 12 people. Ultimately, the session didn’t yield any progress; Republicans adjourned it after just 90 minutes, without taking up a single bill.

Democrats statewide are also eyeing a laundry list of priorities that have been blocked by Republicans in the past, including the potential to raise the minimum wage to $15 per hour and pass a state Equal Rights Amendment that would give civil rights protections to LGBTQ individuals. There’s also the inescapable factor that whoever wins the state house will be in control of drawing congressional districts after the 2020 census. (Virginia Republicans had previously drawn maps in their party’s favor until a court struck them down as a racial gerrymander.)

Voters are “starting to pay attention to what the politicians are saying, and not only what they’re saying, but what they’re doing,” Nguyen told Vox. Democrats in Virginia and across the country are waiting to see what effect that renewed focus will have at the ballot box on Tuesday — and how it may affect the presidential race.

Apple and Google’s new contact tracing tool is almost ready. Just don’t call it a contact tracing to...
Bernie Sanders finally wins California
Ant-Man and the Wasp’s true villain is not who it appears to be
Opening up the economy won’t save the economy
Branding is the real reason Schick’s parent company bought razor upstart Harry’s for $1.4 billion
9 Supreme Court cases that shaped the 2010s