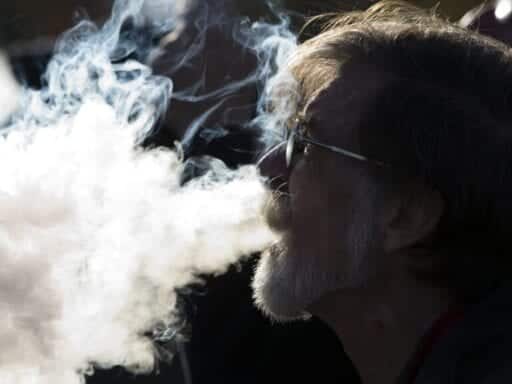 The sticky chemical has been found in samples taken from people who got sick or died from vaping-related illness.

As the outbreak of vaping-related illness that has sickened more than 2,000 people across the country and killed at least 39 has dragged on for weeks, it’s been clear that THC vape products are playing a major role.

But what hasn’t been clear is which specific product or ingredient might be at fault. Finally, on Friday, the Centers for Disease Control and Prevention announced a “breakthrough” in the agency’s investigation.

Vitamin E acetate, an oily chemical added to some THC vaping liquids to thicken or dilute them, has emerged as “one very strong culprit of concern,” said Anne Schuchat, principal deputy director of the Centers for Disease Control and Prevention, at a press briefing.

The chemical, which is used in nutritional supplements and skin creams, isn’t safe to inhale. Sticky and honey-like, it hangs around in the lungs, health officials said, interfering with how they function. Samples taken from 29 patients in 10 states for a CDC Mortality and Morbidity Weekly report released Friday showed “direct evidence of vitamin E acetate at the primary site of injury within the lungs,” Schuchat said. The chemical was found in all samples, while other potential toxins — such as plant and mineral oils — weren’t.

The CDC also emphasized their investigation isn’t over: Officials still can’t say for sure that vitamin E acetate is the source of harm in all cases. “Identifying a collection of information that points to vitamin E acetate as a concern for lung pathology doesn’t mean that there are not other components causing lung harm,” Schuchat added.

But right now, the chemical has emerged as a likely culprit. The new finding adds to the evidence from federal and state investigations showing vitamin E acetate appears to be a common link in vaping-related illness cases. Of the 419 THC-containing products the FDA has tested, as of November 8, 50 percent contained the sticky substance. Recent data from Utah found the chemical in 89 percent of the THC-containing cartridges tested there. New York State — the first to signal concern about vitamin E acetate — has found vitamin E acetate in many of the THC vaping cartridges used by patients suffering respiratory illness.

Black market cannabis suppliers have been known to use vitamin E acetate — but legitimate suppliers may be using the chemical, too

State and federal investigations have also found many of the THC products people reported using were THC cartridges purchased through informal or black market sources. And vitamin E acetate has reportedly been used as a cheap cutting agent by illicit cannabis suppliers.

But even in states where cannabis vaping products are manufactured by legitimate sources, regulators haven’t necessarily been checking for the presence of vitamin E acetate.

Cannabis is subject to a patchwork of state-level health regulations where it’s legal or decriminalized. And, as I reported recently, these regulations are generally weak and inadequate, revealing a problem in the way cannabis is regulated in this country.

So in Washington state, for example, the Liquor and Cannabis Board regulates the recreational cannabis marketplace, and products are tested for “potency, moisture, foreign matter, microbiological, mycotoxins (fungi), and residual solvents,” according to a spokesperson there. But only medical-grade products are also tested for pesticides and heavy metals. The list of tests also doesn’t include checking for chemicals, such as vitamin E acetate, that have emerged as a health threat. “Until only recently with the outbreak of the vapor associated lung injury crisis, no one suspected additional safety tests should be considered,” a spokesperson for the board said.

That’s why, with the mounting death toll, some experts are calling for more stringent oversight.

“How confident [are state regulators] that some of the ingredients used in vape oils are safe?” said David Hammond, a public health researcher at the University of Waterloo in Ontario who studies the e-cigarette and THC vape markets in Canada and the US. “I don’t know if anyone knows that. It’s the manufacturer’s job to make sure products don’t include harmful chemicals. But the whole concept of vaping from liquids is fairly new and we don’t have a lot of certainty.”

Coronavirus primary delays mean some states could lose delegates at the Democratic National Conventi...
Walmart’s e-commerce chief is leaving to build ‘a city of the future’
Bernie Sanders looks electable in surveys — but it could be a mirage
The State Department is telling US tourists that El Salvador is now as safe as Denmark
Moderna released more Covid-19 vaccine results. They’re very encouraging.
The problem with comparing health care workers to soldiers on Memorial Day