VMAs 2018: 6 winners and 2 losers from a mostly lackluster show 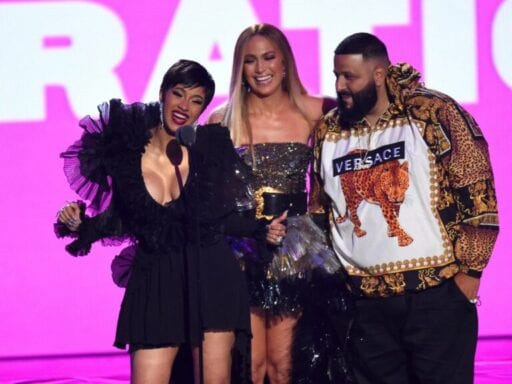 The ceremony was a dud overall, but there were still some worthwhile bright spots.

Though the 2018 MTV Video Music Awards weren’t completely devoid of spectacle, the ceremony ended up being a mix of the baffling and the unmemorable. Aside from some of the performances, the ups and downs were precipitous, as the stacked list of nominees yielded fairly lukewarm wins.

Overall, it was what the ceremony lacked — a sense of cohesion or drama, somebody to properly shepherd an Aretha Franklin tribute, and any of the musical beef that’s made the show so exciting in past years — that stood out. The final Aerosmith-Post Malone performance, complete with pre-punched holes in the fake Marshall speakers onstage, served as a strange cherry on top of the cake.

Here are six winners and two losers from the night.

During the preshow, one-time VMA MVPs the Backstreet Boys started off the night by singing their recent single “Don’t Go Breaking My Heart” on top of New York City’s Radio City Music Hall sign in a performance that seemed a little cramped at best.

@backstreetboys played so many games with my in that performance #VMAs pic.twitter.com/Pflp4nwnzZ

During the ceremony, they came down from the sign to present the award for Song of the Year, singing snippets from each nominee in one of the cuter segments of the telecast. During the bit, A.J. McLean noted that one of the nominees, Camila Cabello’s “Havana,” was his daughter’s favorite song, inducing awws from the audience while serving as a general reminder of how much time has passed since the Backstreet Boys were at the peak of their popularity.

Despite being reminded that we all must die eventually, it was still nice to see the Backstreet Boys in good health and good humor, even if they didn’t get to properly perform during the main ceremony.

Not long after Shawn Mendes gave the first performance of the show, each subsequent moment began to bleed into the next in a dull haze — Tiffany Haddish made fun of Fifth Harmony during a bit with Kevin Hart, Nicki Minaj won the award for Best Hip-Hop Video, and a terrifying zygote named Bazzi took the stage and brought with him the promise of darkness and that this would all be over soon.

Thank god, then, that Jennifer Lopez was present to inject a jolt of life into the proceedings. As the recipient of this year’s Video Vanguard Award, J. Lo was on hand to perform a medley of some of her greatest hits, and though she started a little shaky with “Waiting for Tonight,” she soon found her groove and brought out the showmanship that garnered her the honor in the first place.

She hit her moves, settling in with “On the Floor” and giving energetic renditions of her peak dance hits like “Love Don’t Cost a Thing” and “Jenny From the Block.” And with rapid-fire set changes including cameos from DJ Khaled and Ja Rule, she was the first performer to bring the promise of something exciting.

Lopez made us remember that she’s a true entertainer while underscoring that everything else about the 2018 VMAs was missing the charisma, uniqueness, nerve, and talent that she has in spades.

Bafflingly, most of the cutaway reaction shots during the ceremony featured either empty seats or people looking half-enthused at best. The major exception to the rule was Ja Rule, who was at the show to perform “I’m Real” and “Ain’t It Funny” with Lopez.

Every shot of Ja Rule in the audience showed him grooving along to the performances and generally just looking happy to be in the room. Whether or not that good-natured display is enough to earn back the goodwill he lost over last year’s Fyre Festival debacle (which resulted in eight lawsuits) is unclear, but at least somebody at the VMAs was having a good time.

Winner: anyone with a crush on Shawn Mendes

Shawn Mendes was specifically designed and created to induce crushes. The 6-foot-2, aggressively pleasant Canadian has slowly been shifting his image from “bubblegum teenage dream” to “sensitive and sensual crooner.” At no point during the VMAs was that more evident than during his performance of “In My Blood,” complete with a wet T-shirt contest for one:

The performance was laced with a little awkwardness (you could tell that Mendes was slightly uncomfortable and nervous), but it showed off the vocals that have made him a stan-worthy star. He couldn’t totally hide his earnest charm — something that feels a little more natural and believable than the sexy persona he’s trying to adopt. Not that his fans will have any problem with the latter.

Loser: the production and direction of the show

Lopez and Mendes gave good performances, but if you were watching at home, it was a frustrating experience. There were pans away from tight choreographed pieces and wide shots of more intimate moments. It’s unclear who, if anyone, was calling the shots from the production booth.

While J. Lo’s energy was enough to sustain the momentum during her performance, the lack of organization was especially evident in the “Push Artist” segments, where new and upcoming artists were given a verse or two to sing their catchy hooks. Poor Hayley Kiyoko, a singer who grew up idolizing and incorporating boy-band choreography — uninspired camerawork flattened her performance into static pulp fit for the food court at the mall.

And there was this strange moment where a barely mic’d Mendes presented Lopez with her Video Vanguard Award, with all sorts of commotion going on in the background and a woman almost crossing into the shot:

No one is expecting exquisite cinematography from the VMA crew, but if MTV wants to tout performances (since these awards don’t hold the clout of Grammys), it should do a better job of showcasing them.

Even though Cardi B opened the show by pretending to breastfeed, we never would have expected that the VMAs would be such a big night for moms. Throughout the evening, several mom shoutouts lent a sweetly sentimental tone to the telecast.

During her acceptance speech for Best New Artist, Cardi B noted that people had called her decision to have a baby a potential death knell for her career. “You know, I had a baby, I carried a baby,” she said, defiant. “I am still winning awards!”

And while accepting the Video Vanguard Award, Lopez also spoke about having her children, calling them her “two little angels” and crediting them with changing her life. She also thanked her mother, Lupe, “the original dancing queen.”

The theme of motherhood continued with Ariana Grande’s performance of “God Is a Woman,” in which she brought her mother and grandmother onstage; and with Camila Cabello, who took home Artist of the Year and Video of the Year after bringing her mother as her date to the awards ceremony.

Aretha Franklin died less than a week before the VMAs, and many wondered how the show would honor the legendary Queen of Soul. It seems that since Franklin’s death ultimately overshadowed the 60th birthday of another seminal artist, Madonna, the VMAs decided to take out two birds with one stone — by inviting Madonna to pay tribute to Franklin while also presenting the Video of the Year Award.

Conceptually, that must have sounded like a tantalizing idea, but in practice, Madonna ended up rambling on about how hard it was for her to become the pop icon she now is. The implication was that she found inspiration in Franklin, and she did mention that she loved Franklin’s Lady Soul album, but ultimately, Madonna’s tribute to Franklin turned into a tribute to Madonna by Madonna. It came off tacky and disorganized, leaving many viewers with the belief that skipping a Franklin tribute would have been better than Madge’s slapdash one.

Camila Cabello, the autonomous former member of Fifth Harmony who defected from the now-defunct group’s other four harmonies, won two of the biggest awards of the night for her body of work and her hit song “Havana”: Video of the Year and Artist of the Year.

While Cabello and her fans will no doubt be pleased, it felt as if her trophies came at the expense of artists like Drake, Cardi B, and Ariana Grande, who went into the night with a lot more buzz and clout — something you might expect from an “artist of the year” — and videos like Childish Gambino’s “This Is America,” which was much more searing and unforgettable than the video for “Havana.”

Camila Cabello did NOT deserve that fucking award. Cardi B and Drake worked their ASS off this year and gave us bops after bops smh. This award show is forever TRASH. I’m seriously blocking Camila lmao bye #VMAS pic.twitter.com/wtglqqVxI7

Considering those strong contenders, the videos they’ve created, and their greater command over the public’s interest in the last year, Cabello’s wins were slightly puzzling. Though the VMAs aren’t exactly the highest merit a musician can receive, and it’s not as if Cabello has taken home a Pulitzer, it won’t be surprising if the conversation surrounding Cabello in the coming days is less about celebrating her wins and more about whom she beat in taking home two of the biggest awards of the night.

Did Joker deserve all the discourse?
Trump reshaped the US immigration system — but it’s been ignored at the debates
What we know about a reported hunger strike by fathers in immigration detention
On Waiting
A lack of insurance is leading more Americans to have weight loss surgery in Mexico
No cops were charged with Breonna Taylor’s death. This is how the system was designed.