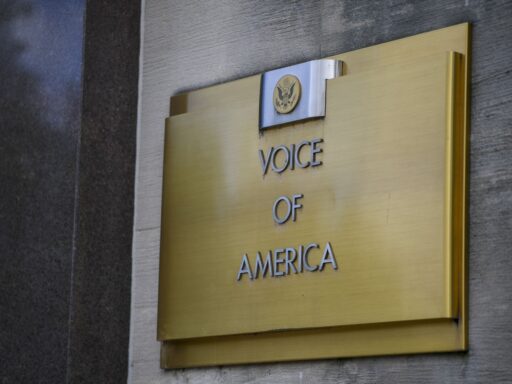 This is a bad signal to send to the rest of the world about how to treat a free press.

On Monday, Secretary of State Mike Pompeo gave a speech at VOA, lambasting the US government-run media outlet for its unwillingness to uncritically promote the administration’s line around the world. Afterward, VOA director Robert Reilly engaged Pompeo in a question-and-answer session filled with softballs, only to let the Cabinet member leave without facing any hard-hitting queries from the outlet’s reporters in the audience.

Unhappy with what transpired, VOA’s White House senior correspondent Patsy Widakuswara — who was in the audience — pursued Pompeo as he left VOA’s building in downtown Washington, DC. She asked what he planned to do to improve America’s reputation around the world and if he regretted saying in November that the presidential transition would proceed smoothly into a second term for President Donald Trump. Pompeo ignored her questions and left.

The nation’s top diplomat @SecPompeo ignoring my questions about what he is doing to restore US reputation and whether he regrets saying there will be a second Trump administration. pic.twitter.com/8pcP9lRQ5a

Widakuswara, who has worked as a journalist for more than 25 years, then turned around to find Reilly and confronted him on how the session had gone. According to sources familiar with what transpired, she asked Reilly why he didn’t ask Pompeo any of the questions that VOA journalists had submitted beforehand. After asking who she was, he then said, “You don’t know how to behave.” He then said Widakuswara was “not authorized” to ask questions and that she was “out of order.”

“Reilly was visibly perturbed” by Widakuswara’s confrontation, a VOA source told me, speaking on condition of anonymity to avoid retaliation.

Elizabeth Robbins, VOA’s deputy director, was alongside Reilly during the confrontation. Late Monday evening, Widakuswara received a message from one of her bosses saying the reporter would no longer be the outlet’s senior White House correspondent, and would instead be reassigned as a general assignment journalist. The order for the reassignment, per multiple sources, came from Robbins.

Some sources believe that Robbins, who joined VOA from the State Department in December, is fiercely loyal to Pompeo. Robbins didn’t immediately respond to a request for comment.

Widakuswara’s reassignment was unfortunate timing, as she was scheduled to be the pool reporter for the Washington press corps aboard Air Force One on Tuesday during President Donald Trump’s trip to Alamo, Texas. Widakuswara was told she couldn’t fulfill that duty.

One VOA source said the outlet’s workers, including some in management, are “incensed” by what has transpired. “Being taken off the White House beat, this immediately smacks of political retaliation,” that person said.

Regardless of the reason, few I spoke with believe one of VOA’s top reporters should be removed from her prominent posting mainly for questioning Pompeo when given the chance. “Patsy was there representing all of us, every VOA journalist trying to question the secretary,” the same source said.

America’s democracy is reeling. This incident won’t help it.

Widakuswara’s reassignment, first reported by Vox on Monday night, comes at an inopportune time for Pompeo.

The secretary is scheduled to speak at the National Press Club on Tuesday morning, during which he’s expected to accuse of Iran of having close ties to al-Qaeda. After the Widakuswara incident, the location of the event is awkward for the secretary, since it’s a professional and social club for journalists.

It also comes less than a week after an insurrection at the Capitol, incited by Trump, has left many in the US and around the world questioning the state of American democracy. Pompeo’s unwillingness to take tough questions doesn’t help that cause, as one way the US signals the health of its political system is by leaders handling queries when posed to them.

Shameful. What a poor message to send to the rest of the world about how to treat the press. https://t.co/Kveif7SFLl

Finally, it’s not a great sign of how the Trump administration has run the US Agency for Global Media, VOA’s parent organization. Ever since a Trump and Steve Bannon ally took over last year, the agency has sought to purge those who don’t toe the administration’s line. That effort has eroded the decades-long tradition of keeping politics out of the way VOA and its sister outlets like Radio Free Europe operate.

It’s a sad state of affairs. And instead of leaders like Pompeo paying the price, it’s the journalists asking him to answer for his mistakes who get reprimanded.

Vox Sentences: Keeping up with the Kavanaugh hearings
When a sex offender calls, she’s there to listen
Good news about America’s Covid-19 vaccine campaign
I had to cancel my health care to run for Congress
Supreme Court says American Express contract with merchants does not stifle credit card competition
Joe Biden explains why he flipped on the Hyde Amendment