Vogue’s September issue is legendary. Here’s how Beyoncé made it her own. 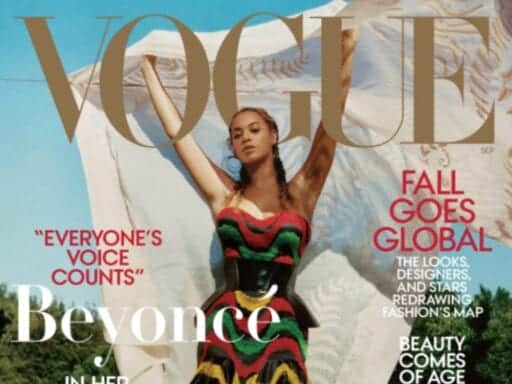 Beyoncé rarely appears in magazines at this point in her career, preferring to stage her own photo shoots that she publishes to Instagram, and almost never granting interviews. (She didn’t even do an interview the last time she was on the cover of Vogue, for the 2015 September issue.) So for her to appear on Vogue’s September cover with an accompanying interview is more of a coup for Vogue than it is for Beyoncé.

Beyoncé took full advantage of the opportunity regardless. She reportedly had an unprecedented amount of control over the issue, and she used that control to create a September issue that is far more in tune with the Beyoncé brand than it is with the Anna Wintour brand. Here are three ways that Beyoncé’s September issue of Vogue is peak Beyoncé.

At this point, part of the Beyoncé brand is making sure that everything she does is on brand. If she’s presenting something to the public — a new album, a Coachella performance, a birth announcement — then she is doing it with the full understanding that she has considered, planned, and executed every detail to the utmost perfection. Anything less is beneath her status as an icon.

She does not give interviews that she cannot control. She does not say a word in public that she has not vetted. She does not leak information to the public. Everything that we know about Beyoncé’s private life comes through Beyoncé herself.

So it feels entirely right for Beyoncé that her creative fingerprints are all over this issue. Reportedly, her contract required Vogue to give her full approval over the cover, the photographs of her that were used, and the captions that accompanied them. Her interview is an “as told to” first-person piece, without anyone else’s words or framing interfering with the way Beyoncé is presenting herself to her readers.

The result is a profile that works as part of the story Beyoncé has been telling us about herself for the past few years, since Lemonade at least.

Beyoncé repeatedly centers black artists in her work — and for the past few years, she has repeatedly used her art to make the case that art made by and about black people is valuable and important.

The 2017 photos for both her pregnancy announcement and her birth announcement were shot by hot young black photographers, and they often involved displacing the white figures at the center of iconic Western images and taking over their position herself.

And in the video for “Apeshit,” released just a few months ago, she symbolically replaces the white bodies of the Louvre’s most iconic paintings with the black bodies of her dancers before ending on a close-up of one of the few portraits of a black person in the Louvre that is not a portrait of a slave.

For the Vogue September issue, Beyoncé worked with 23-year-old photographer Tyler Mitchell, the first black photographer ever to shoot a cover for the magazine. “Until there is a mosaic of perspectives coming from different ethnicities behind the lens, we will continue to have a narrow approach and view of what the world actually looks like,” she says in the accompanying interview.

In both her pregnancy and her birth announcements, Beyoncé was photographed in front of a lush, pastoral background, with an airy mantle draped around her. In both photos, the lines of her hair and the mantle echoed the lines of the hair and the mantle of Botticelli’s Venus, and the flowers strewn around her recalled the flowers that the wind is blowing around Venus in the painting.

For her Vogue photo shoot, Beyoncé returned again to the same backdrop and threw a mantle into the wind over her head, echoing the lines of Botticelli’s Venus once more. But this time she did it in a dress that’s striped with the colors of the Ethiopian and Pan-African flags, in a move that pointedly centers her blackness at the same time that it insists on her divinity.

Beyoncé long ago renounced the title of Queen Bey to become King Bey. Now she’s turning her back on earthly titles altogether. She’s a goddess now, and the rest of us had better bow down, bitches.

Donald Trump has some thoughts on fighting wildfires. They’re nonsense.
Acronym, the dark money group behind the Iowa caucuses app meltdown, explained
The UN Climate Action Summit was a disappointment
A police officer killed my father 27 years ago and went unpunished. It changed my life forever.
The pandemic tattoo craze is here
America’s anti-democratic Senate, by the numbers