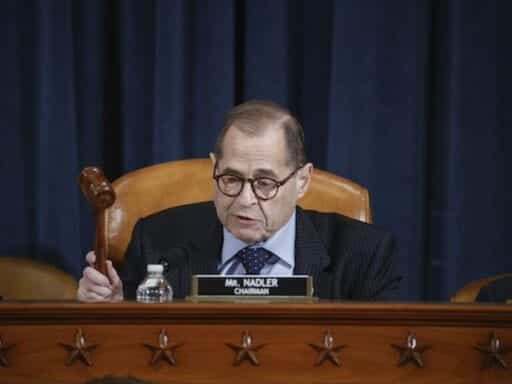 Full House vote on impeachment coming soon; UK vote leaves Johnson in the clear and Corbyn out of a job.

The committee has spoken

Tories hold on to power in Thursday’s UK election

“It was a painful scene, may God help his mother, and I wonder why the police did not do anything. Maybe tomorrow this thing could happen with me and no one would help me.” [Abu Mohammad Alkinani, an Iraqi man who knew the boy killed by a mob Thursday]

Listen to this: Space Farce

The Democrats gave President Trump his Space Force this week. But what is it? [Spotify]

How McKinsey infiltrated the world of global public health

Is Trumpism a cult?

Genetic testing is an inexact science with real consequences

The eternal adolescent voice of The Catcher in the Rye, in one passage
President Trump hits Mexico for 'taking our money and sending us drugs'
Trump and Fox News want to send their hydroxychloroquine hype down the memory hole
7 key House primaries to watch on Super Tuesday
Maxine Waters and the trope of the “angry black woman”
My wife and I did an interview about a TV show. It changed how we thought about our marriage.