Vox Sentences: A NAFTA by any other name 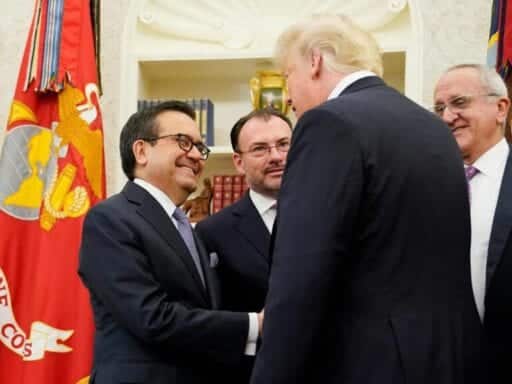 The new deal intended to replace NAFTA is eerily similar; riots between far-right demonstrators and counterprotesters turn violent in Germany.

Far-right extremism is back with a vengeance in Germany

“To some, happiness is the opposite of worry: enjoying good health, being free of troubles. To others, it’s living a meaningful life and giving to others. … The bottom line: Researchers determine if someone’s happy by asking them if they’re happy. Don’t take my word for it: Ask yourself.” [Brad Rassler on learning to be “really, truly happy” / Outside Online]

Why the world is watching Imran Khan. [YouTube / Christina Thornell and Kimberly Mas]

Solar on water, robots, and 2-sided panels, oh my: solar tech’s near future

What happens after the GameStop bubble bursts?
Britain has officially left the European Union. But what happens next?
The new UK coronavirus mutations, explained
To beat Trump, try running an outsider
Trump’s closing message is lying about the coronavirus at rallies that spread infection
Vox Sentences: Walmart’s gun rollback