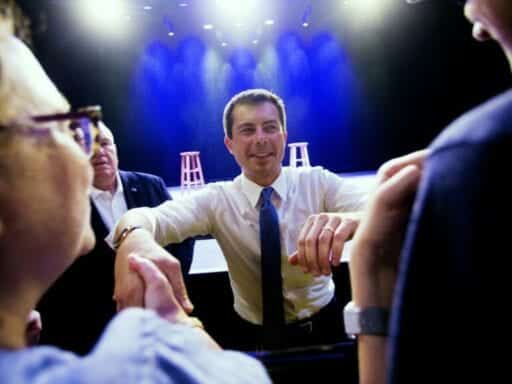 Share
Loading...
Pete Buttigieg greets supporters after speaking to a crowd during a fundraiser for his presidential campaign in August. | Derek Davis/Portland Portland Press Herald via Getty Images

A local progressive group tracked down the event to protest the candidate’s reliance on big money donors to fund his campaign.

At one of Pete Buttigieg’s first high-dollar fundraisers since he agreed to open them up to the press, the South Bend, Indiana, mayor and his donors were greeted by more than just a new level of media scrutiny: A local progressive group also protested outside.

New York Communities for Change (NYCC) tracked down the Wednesday event in New York City to protest the presidential candidate’s reliance on big money donors to fund his campaign.

While Buttigieg is far from the only candidate to face protesters at fundraisers, Wednesday’s protests come at a moment when his surging campaign has faced extensive scrutiny over his ties with big money.

According to a video posted on NYCC’s Twitter account, it appears protesters attempted to enter the Upper West Side home of Kevin Ryan, a tech investor who was hosting the fundraiser, at which point the police were called to control the crowd of about two dozen people.

Rather than coming out to talk with working class New Yorkers (or letting us in! It’s cold out here!) @PeteButtigieg called the cops on us. Why did #WallStreetPete come to campaign in our city if he’s afraid to talk to us. pic.twitter.com/7pM3tl6GsM

We found the #WallStreetPete fundraiser on the UWS, and staff of @PeteButtigieg refuse to let us in.

They shoved out protester and eventually called the cops on us.

Collecting checks from billionaires in private is not a good look Mayor Pete. pic.twitter.com/PNwxRjWHcJ

According to one of the posted videos, protesters chanted “no justice, no peace! Where is Pete?” while police looked on and led some protesters away from the front door of Ryan’s residence. Inside the fundraiser, Buttigieg reportedly commented on the protest. “Wow, they’re excited,” he joked, adding “One of the things you learn on a deployment is dealing with distracting noises,” referring to his time in Afghanistan.

Another video posted on Twitter by NYCC shows the candidate leaving the fundraiser while protesters chanted “Wall Street Pete!” According to the New York Daily News, Buttigieg left the event to attend another fundraiser at the Greenwich Village home of Anna Wintour, the long-time editor of Vogue Magazine. It was his third large fundraiser of the day after spending time in Midtown with a group of investment bankers in the Redbury Hotel earlier on Wednesday.

#WallStreetPete wouldn’t let us in but we know that he heard our message!!! #MakeBillionairesPay pic.twitter.com/XQnr8W0E4b

It was the second night in a row the group was able to track down the campaign’s fundraiser.

“Pete can’t run a populist presidential campaign while he’s being funded by billionaires,” NYCC executive director Jonathan Westin told the Daily News. “You can run for president without taking money from executives.”

The Buttigieg campaign did not respond to a request for comment from Vox, but touted the campaign’s connections with small-dollar donors late Wednesday when asked by Newsweek about the protests. “We’ve received the financial support of over 700,000 individuals and … an average contribution in Q3 was $32,” Buttigieg’s rapid response communications manager Sean Savett told Newsweek. “Of those, 98 percent of our donations were under $200, 85 percent of our donations were under $50.”

In comparison, Sen. Elizabeth Warren’s average donation size for the third quarter was $26 from over 940,000 individual donors, while Sen. Bernie Sanders received an average $18 donation from over 1.4 million individual donors. Both candidates have centered on small-dollar donations throughout their campaigns. Former Vice President Joe Biden’s campaign said their average donation this quarter was $44 while raising a total of $15.2 million.

“It is even more important that candidates expose possible conflicts of interest right now,” Warren said when asked about his three years working for McKinsey, a global consultancy firm who’s had some ethically questionable work in the news recently. “And that means, for example, that the mayor should be releasing who’s on his finance committee, who are the bundlers who are raising big money for him, who he’s given titles to and made promises to.”

In response to criticism, the Buttigieg campaign announced Monday that they would be opening the candidate’s fundraisers to the press. Though according to the Daily News, Warren herself attended a fundraiser at Ryan’s residence for her 2012 Senate campaign, she has sworn off high-dollar fundraisers for her presidential campaign this year.

She and Sen. Bernie Sanders are relying on small-dollar donations to fuel their campaigns. As Vox’s Ella Nilsen and Emily Stewart explained, “Biden is doing big fundraisers, but he’s let press into them from the beginning.”

On Tuesday, Buttigieg released the names of the clients he did work for when he was with consulting firm McKinsey, which included Blue Cross Blue Shield of Michigan, Canadian grocery chain Loblaw’s, Best Buy, the US Department of Defense, the Energy Foundation, the US Postal Service, and a group of environmental nonprofits, public utilities, and government agencies like the Environmental Protection Agency.

Even with a newfound commitment to openness surrounding his campaign’s fundraising apparatus, Wednesday night’s protest shows that Buttigieg doesn’t appear to have allayed progressive skepticism. Concerns over his campaign’s finances don’t appear to be going away, as Nilsen and Stewart explained:

Getting money out of politics is a big issue for Democrats, whether liberal or moderate. Democrats want politicians who are less beholden to corporate interests and who don’t feel like they owe favors to donors. That’s the concern Buttigieg is trying to allay, but he will likely be getting more questions down the road.

Earlier this week, a video showing a teenager confronting Buttigieg over his reliance on big-dollar donations went viral on Twitter. “I wanted to ask you if you think taking big money out of politics includes not taking money off of billionaires and closed-door fundraisers,” asked the teen.

Buttigeig’s reply? A curt “no,” before moving on.

Trump’s Syria withdrawal is a boon for ISIS — and a nightmare for Europe
I support affirmative action. But Harvard really is hurting Asian Americans.
The coronavirus could tear the EU apart
A new government study shows how Trump’s tariffs have backfired
Bernie Sanders’s plan to reshape corporate America, explained
Trump just offered one of the boldest lies of his presidency