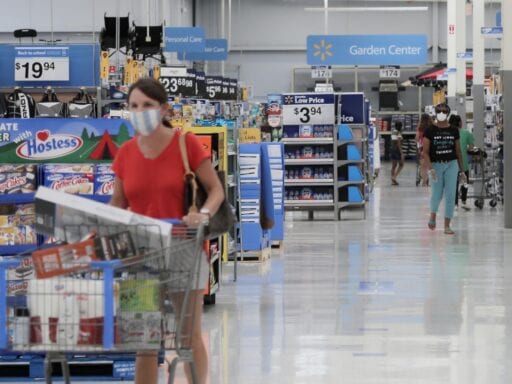 “I worried every shift that someone would assault me.”

On May 1, 2020, Calvin Munerlyn was working as a security guard at Family Dollar in Flint, Michigan. Sometime during his shift, he refused service to a woman who became combative after Munerlyn said her daughter needed to wear a mask while she shopped. A statewide order requiring facial coverings in enclosed public spaces had gone into effect just a few days earlier.

The mother and daughter left, but about 20 minutes later, the woman’s husband and son arrived and entered the store. After a short confrontation, the son allegedly shot Munerlyn in the back of the head. The 43-year-old father of nine died at a local hospital the same day.

In July, a Trader Joe’s worker in New York City was taken to the hospital after being “[hit] … over the head with a wooden paddle” by one of two men who were asked to leave because of their refusal to wear masks.

A similar incident happened at a California Target in May, when one of two male customers suddenly “turned and punched a store employee” as they were being escorted out. A Target worker’s arm was broken during the ensuing scuffle, and the suspects were later arrested for felony battery. (Although Target didn’t announce a company-wide mask policy until mid-July, Los Angeles was under an emergency order at the time that required people to wear face coverings in places like grocery stores.)

Several polls have found that a majority of Americans support a national mask mandate, and a long list of stores and restaurants created their own mask requirements over the summer. Yet the employees assigned to enforce those rules — often entry-level workers who are paid low wages, despite their jobs being deemed “essential” during the pandemic — are increasingly subject to verbal abuse and violence from the very people they’re trying to protect.

At the very least, some are being sent to do a job with inadequate training and support from their employers, making those so-called mandates little more than empty platitudes — and actual enforcement, in most cases, impossible to do safely.

Just ask Christopher Vanderpool, a former “health ambassador” for the country’s largest private employer: Walmart. Though Walmart’s announcement of its mask requirement stated that health ambassadors would get “special training to help make the process as smooth as possible for customers,” Vanderpool did not.

“The manager walked me outside and simply told me that I was to ask a customer to put on a mask, and if they didn’t have one or didn’t want to wear one, let them inside without a face covering,” Vanderpool told Vox. Despite Walmart promising that health ambassadors would be trained to “work with customers who show up at a store without a face covering to try and find a solution,” a two-minute Walmart training video specifies that associates “should simply allow the maskless customer inside and alert a member of management to determine the next steps, which are not detailed,” Bloomberg reported in July.

Vanderpool was never shown the video, and he told Vox he never saw evidence of further enforcement after letting an unmasked customer into the store. Moreover, his attempts to enforce the rule were harrowing.

“My time standing outside the store … is where I received the most threats and encountered the angriest customers, who would yell expletives at me as I tried to do my job to protect public health,” he said.

Vanderpool’s story illustrates the disparities between what some companies say publicly and what they do privately. Other chains, including CVS, Walgreens, and Lowe’s, have also admitted that they won’t enforce their own rules, citing safety concerns.

If companies “are not requiring customers to wear a mask within their store, then they never had a requirement,” Stuart Appelbaum, president of the Retail, Wholesale, and Department Store Union, told CNN in July. “All they had was a public relations stunt.”

Here’s Vanderpool, in his own words, about what it was really like on the front lines of the mask debate, and why he’s stepping up to advocate for other workers who are still there.

This interview has been edited for length and clarity.

I wanted to work at a grocery store after hearing on the news in March that they were experiencing an increase in traffic and demand because of the coronavirus. I wanted to step up for my community by doing essential work. Walmart called me back first and hired me as a cashier at $11 per hour, pre-tax. (I was not employed prior to Walmart. I was in high school, so I volunteered in my community through Key Club and built advocacy skills through speech and debate.)

What often happens at Walmart is that someone needs a break, and a manager will find someone to take their spot. There isn’t a choice, mainly because our store was chronically short-staffed. This was the case when I became a health ambassador. I’d learned about the position the day before, when I was assigned to count the people who entered and exited the store.

“I didn’t receive any training, except guidance to allow any unmasked customers in the store”

I didn’t receive any training, except guidance to allow any unmasked customers in the store, even if they didn’t have one or didn’t want to wear one. (At this point, my store was not offering disposable masks to customers who arrived without one.) I am aware that there is a training video, but they did not instruct me to watch it. Walmart also has written guidelines, but again, I was not shown these. My training — if you could call it that — was a quick verbal instruction by my manager.

You never knew what a customer’s response would be. Most of the customers wore a mask, but you always had to be prepared for a tense exchange. I’d say one in 10 customers refused to wear one, often using expletives and citing health issues or conspiracy theories. I heard: “I will not wear that piece of crap,” “Covid-19 is a bunch of propaganda,” “This is a hoax,” “Get away from me.” I was instructed to tell them: “Thank you for shopping at Walmart, you may enter the store,” and then inform a manager by walkie-talkie. I rarely received a response, and I don’t believe a manager ever confronted an unmasked customer despite being notified.

I did not receive additional pay for standing in the sun and heat for hours while exposing myself to unmasked customers who I was required to interact with. Fayetteville is sweltering in the summer — temperatures into the 90s and humidity exceeding 40 percent on the daily — and health ambassadors stand outside without any shade. Walmart provides cold water, but standing outside for a whole shift takes a toll.

There was also no acknowledgment by my managers of the risk I was faced with. That’s nothing new, however. Associates are constantly endangered by Walmart’s blind eye to rude, violent customers. I’ve had numerous customers threaten to beat me up for inconveniencing them, just because I needed to count them, or asked them to enter through the doors marked “enter,” or to pause and wait for the group ahead.

I did not ever feel safe in the health ambassador role. I’m just thankful that nobody became physically violent against me — I worried every shift that someone would assault me or threaten me with a weapon. You never know what to expect, and it’s happened elsewhere. That being said, a lot of my fellow health ambassadors and associates generally agreed that we ought to be able to refuse entry to anti-maskers.

“I’m just thankful that nobody became physically violent against me”

After 126 days of employment, my last day at Walmart was on Friday, July 31. With the support of United for Respect, I organized action that day to call attention to Walmart’s disregard for associate and customer health. Associates across the country have been calling for more support during this pandemic, including adequate PPE and hazard pay at 1.5 times regular compensation, but from the start of this crisis, Walmart has ignored us and been months behind with basic CDC-recommended workplace protections.

If I were the CEO of Walmart, I wouldn’t task essential workers who are already putting their lives on the line with another dangerous task, especially without investments in real, sustainable support, like social distancing and more paid time off. United for Respect has collected more than 900 reports of associates contracting Covid-19 in Walmart stores across the country, but it’s honestly shocking to me that more locations haven’t been the source of outbreaks.

I wish Walmart had a stronger policy in place that would keep associates safe from violent customers, and customers and the community safe from unmasked Walmart shoppers. Right now, Walmart’s policy is weak, spineless, and dangerous for everyone who steps into a store.