WandaVision is at its best when it gets weird 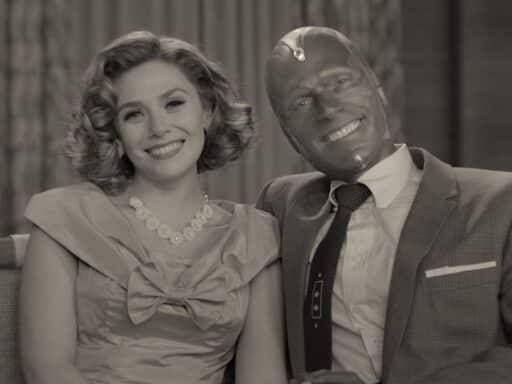 The future of Marvel has arrived — and it looks nothing like the 13 years of Marvel storytelling we’ve come to know. Gone are the intergalactic warlords, shirtless demigods, immensely powerful Infinity Stones, time travel, and even the Avengers, at least for now.

Marvel’s newest release, the kickoff to its Phase 4 era of movies and the post-Iron Man and Captain America chapter of the Marvel Cinematic Universe, is a half-hour, laugh-tracked, black-and-white sitcom called WandaVision.

Elizabeth Olsen and Paul Bettany reprise their roles as superheroes Wanda Maximoff and Vision (hence the title WandaVision). Instead of working to save the world, they’re perplexingly living as a charming pair of newlyweds in the world of a fictional TV show set in the fictional town of Westview. Their identities as superheroes are a secret, and their lives are suddenly playing out in a sitcom they don’t really understand or realize they’re part of.

There’s no explanation of how Wanda and the reanimated Vision — who died in 2018’s Avengers: Infinity War — ended up starring on their sitcom, or who is producing it. They don’t really know, either; every time they’re asked about their personal histories or any significant dates of note, including the year they’re currently living in, they blank. There’s no explanation for where all the other Avengers went, nor do Wanda and Vision seem to understand they’re trapped in a television show.

The only thing we do know is that this show, all of its smiles, and all of its feel-good goofs, isn’t at all what it seems to be.

Marvel made the first three episodes of the show available for critics. And here are my initial thoughts on the good, the bad, and what we’ve seen so far.

The show’s very clever show-within-a-show gimmick works, but has its drawbacks

WandaVision drops its viewers right into the middle of Marvel’s most ambitious experiment yet: The telekinetic Wanda Maximoff and her synthezoid boyfriend Vision are, for whatever reason, stars of a vintage sitcom that borrows heavily from I Love Lucy, I Dream of Jeannie, and Bewitched. WandaVision uses the visual gags and slapstick humor of these throwback series to tell the couple’s comic book story of trying to fit in with the world around them.

The sitcom is a show within the bigger show — a mystery of how these characters got to this point since we last saw them on the big screen together. And the focus of the first three episodes is more about the sitcom and Wanda and Vision living their strange sitcom lives than the overarching Marvel adventure.

The format allows Bettany and Olsen to lean into different aspects of their characters than we’ve previously seen in Marvel’s films. That mostly means comedy and romance. Bettany gets to be goofy. Olsen gets to be warm and charming. The set design, the performances, and the specific feel of a multi-camera sitcom — WandaVision’s pilot was filmed in front of a live studio audience — reflect a love for these indelible shows.

But sometimes that love gets in its own way.

Because Bettany and Olsen are playing their comic book characters as if those characters were unnaturally placed into a sitcom, it feels as though the performances are never fully allowed to be earnest. The conceit that this sitcom isn’t part of reality, and the characters are supposed to be unnaturally existing in this sitcom world, provides cushion to jokes that don’t land or timing that doesn’t quite work since the default tone is to be stilted and strange.

But the real meat and payoff of the show, and what we’re told to take seriously, is the central mystery of why these characters are stuck in what appears to be an alternate reality. And there’s much more gimmick than mystery-solving in the first three episodes.

I hope WandaVision gets even weirder

The best parts of the first three episodes are when WandaVision unapologetically leans into its weirdness — like a very strange scene featuring a bird in episode three. Perhaps that’s because I feel like all live-action television could be improved with more avian creatures. But the more unexplained moments the show throws at us, and the more it pushes up against what feels like horror, the more it allows the sitcom device to really hammer home its uncanny artificiality.

The result is that the sitcom beats feel even stranger, maybe even more menacing — in a way that goes beyond “these characters sure are acting unnaturally.” It makes you realize the intense desperation for these characters to be “normal,” and the tragedy that “normal” is the one thing they’ll never be able to be. When the characters sink back into their comedic shtick, then, it feels even more unnerving.

Elizabeth Olsen finally has more to do

Elizabeth Olsen’s Wanda Maximoff has been a character in the MCU since 2015’s Age of Ultron, and has had maybe 15 minutes of actual screen time in those five years and multiple movies. Wanda has rarely gotten to be anything other than a grieving, angry soul (like when she lost her brother in Ultron and when she confronted Thanos in Infinity War), or someone who’s in love with Vision.

WandaVision gives her much more to do.

While Vision is in the name and Bettany’s Vision is a lead character, the show is really all about Wanda. The format of mimicking legendary sitcoms like I Love Lucy and Bewitched allows Olsen to dip into slapstick comedy and rom-com territory that Marvel’s movies haven’t had room for. Olsen’s hammy charm offensive — which strives to walk a line between a frazzled Lucille Ball and a smirky Barbara Eden — is fun to watch. At times, her performance made me forget that this show fits into a bigger MCU design, and I kinda wished that a Wanda and Vision sitcom was a real thing.

The mystery at the heart of the show is pretty intriguing

What keeps this show going is figuring out what’s actually happening. After 90 minutes of WandaVision, I still don’t know who the villain is or how our heroes are going to get back to reality. Could the fake sitcom be a manifestation of Wanda’s grief over losing her brother and Vision? Is there a different character who’s manipulating everyone involved? Is Nick Fury involved? Are the supporting actors in this sitcom Skrulls or S.W.O.R.D.? Does this whole setup have something to do with that pesky reality Infinity Stone?

I have my guesses, which haven’t changed much from what I picked up on from the show’s trailer. But I appreciate that even though WandaVision borrows more than enough material from the comic books, I don’t know everything that’s happening — a very different experience than Marvel movies, where we know many of the big beats going in and get through the entire plot, villain, motivation, and resolution in about two hours.

After seeing the first three episodes, I think WandaVision is a show whose early going is going to seem better in hindsight, once it has some time to unspool. The foundation the show is clearly working toward in the first three installments really comes to life in episode three — the oddities, the central mystery, and the very suspicious supporting characters all start to come together. I imagine that when everything starts locking into place, the first episodes will take on a new meaning. Until that happens, WandaVision’s debut is an intriguing, visually captivating world with a lot of question marks, one that’s full of potential but also requires a bit of patience.

The first two episodes of WandaVision’s nine-episode series will premiere on Disney+ on Friday, January 15.

Walmart just got hit with a major gender discrimination lawsuit
Tech giants should give away their money instead of their products
A guide to the Trump administration’s biggest scandals, accomplishments, and policies
Pentagon report shows sharp rise in military sexual assaults
Trump supporters celebrated the president by paying tribute to North Korea
America’s failure in Afghanistan, explained by one village