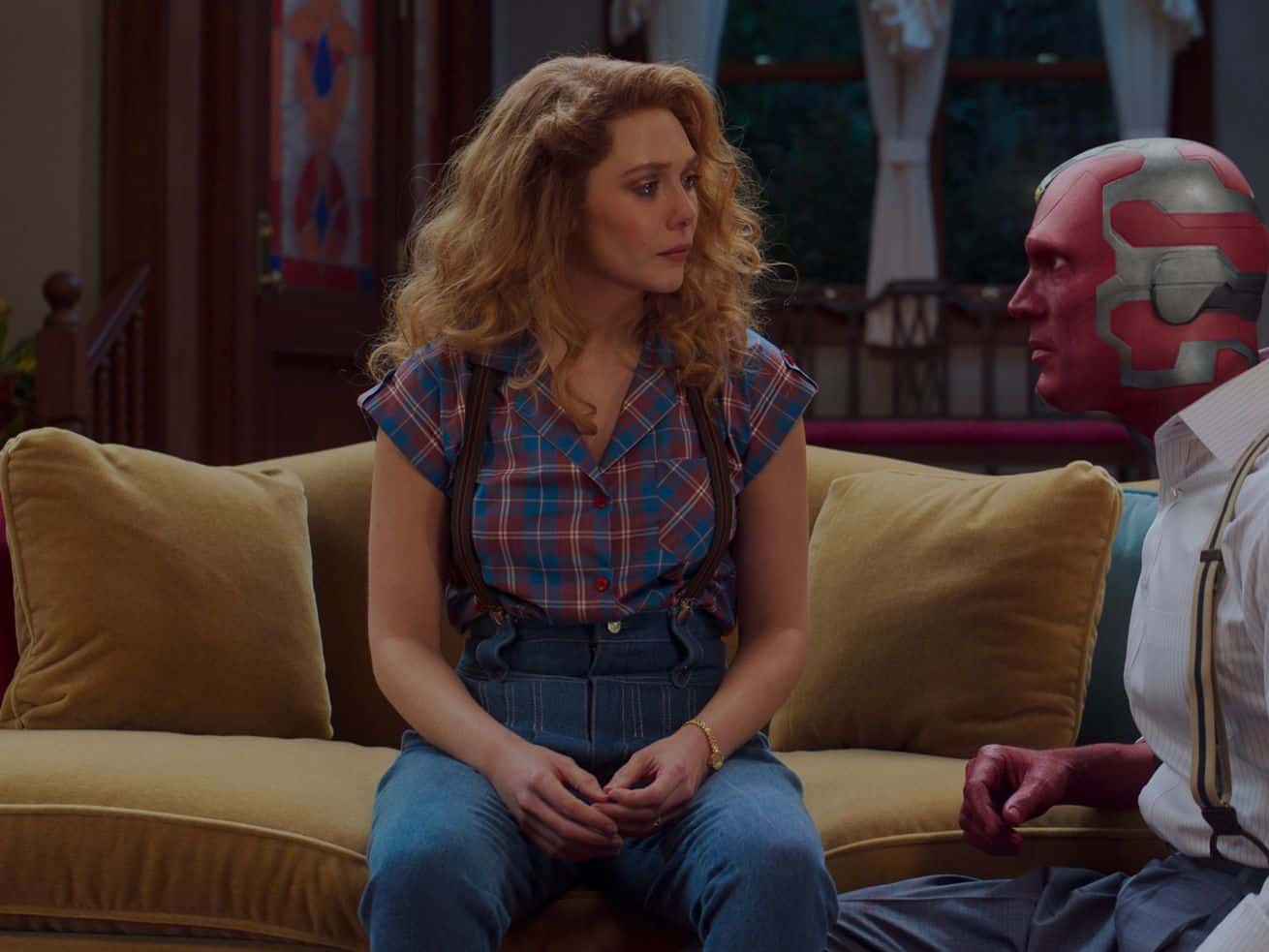 A cameo and Wanda’s shifting powers seem to indicate something’s afoot in the MCU.

WandaVision’s fifth episode gave us more answers about this weird TV show than we’ve gotten in previous chapters. It turns out that prior to creating her suburban sitcom fantasy, Wanda broke into a S.W.O.R.D. facility that was housing Vision’s corpse. We also found out that Wanda is using her mind control powers for the first time since Avengers: Age of Ultron. And Wanda seems to be projecting grief onto the entire town of Westview.

For those catching up: WandaVision and the Westview anomaly seem to be a manifestation of Wanda’s grief over Vision’s death. She’s projecting a happy sitcom life — maybe inspired by shows she watched as a kid in Sokovia — to avert her mourning.

All of this came to light throughout episode five. And then a brief cameo in the final scene left viewers with one giant question that might have future, lasting implications for the Marvel Cinematic Universe: Does the appearance of Wanda’s late brother Pietro signal the introduction of mutants into the MCU?

Only Marvel knows the answer for sure, but let me help explain why that cameo was such a monumental moment for WandaVision and why it has comic book fans absolutely reeling.

Why WandaVision introducing Evan Peters’s Pietro, a.k.a. Quicksilver, is a big deal

The biggest shocker of WandaVision so far comes at the end of episode five, when Wanda and Vision hear a knock at the door. Going by the tone of the entire episode, we were primed for it to be Agnes, but it was actually Pietro (known as Quicksilver in the comics), a.k.a. Wanda’s super-speedy twin brother who was killed by the maniacal AI known as Ultron. Getting even twistier, the character was portrayed on WandaVision by Evan Peters and not Aaron Taylor-Johnson, the actor who played Pietro in Avengers: Age of Ultron. This switcheroo leads Kat Dennings’s Darcy, Marvel’s premier astrophysicist and devout follower of the WandaVision sitcom, to exclaim, “She recast Pietro?”

And in this very simple cameo, Marvel and WandaVision have thrown viewers a major curveball that could have far-reaching implications for the MCU and the X-Men.

The reason Peters’s appearance is so huge dates back to the late ’90s, when Marvel sold off the film rights to some of its major characters. Fox got the rights to X-Men and Marvel’s villains, and Sony got the rights to Spider-Man. Because those rights went to different studios, it meant that Marvel’s entire roster of superhumans and supervillains wouldn’t cross over onscreen. Pietro and Wanda’s case was a little unusual, in that Marvel and Fox split ownership of both characters. This was done because both characters were mutants and played roles as part of the Avengers.

Both studios used their own versions of Quicksilver, with Taylor-Johnson playing him in Age of Ultron and Peters playing the speedster in X-Men: Days of Future Past and X-Men: Apocalypse.

Ownership of the character rights has changed over the past few years — when Marvel and Sony worked out a deal for Spider-Man in 2015 and when Disney, Marvel’s parent company, acquired 20th Century Fox in 2019. Quite simply, Marvel’s entire roster of superheroes can now all appear together onscreen, at least from a rights standpoint.

What makes the arrival of Peters’s Pietro such an eyebrow-raising twist is the possibility that WandaVision might be hinting that Fox’s X-Men characters already exist in the MCU. Granted, there are a few big questions, like whether Peters’s Pietro has powers or if he’s just another person in Westview who has been cast in Wanda’s sitcom — a very real possibility. If he’s just another person pulled into Wanda’s big grief spectacular, then he’d just be a smirky Easter egg.

But if Peters’s Pietro is indeed Fox’s version of Pietro, then his presence could be an acknowledgment that Fox’s slate of X-Men characters and mutants exists in the MCU in a parallel reality that Wanda is manipulating. This could then mean that WandaVision is a way for Marvel to finally work its recently acquired X-Men characters into the MCU. The thought being: If Wanda has managed to pull Fox’s mutant Pietro into her Westview anomaly, then his fellow mutants must already exist and could, like Pietro, jump into Marvel’s established MCU storylines.

What makes this theory even more tantalizing is that Marvel has already been toying with the existence of parallel timelines in the MCU. In 2019’s Avengers: Endgame, the main plot centered on jumping through time without changing other timelines’ futures (see: the Ancient One’s chat with the Hulk). Further, Marvel’s Doctor Strange sequel is called Doctor Strange in the Multiverse of Madness, again hinting at parallel universes. Elizabeth Olsen’s Wanda is reported to be a main character in that movie.

And the idea of a multiverse and parallel universes was the core of Sony’s Oscar-winning animated feature Spider-Man: Into the Spider-Verse.

Again, all of this could just be a coy homage to past movies and actors. But if Marvel is indeed laying down the foundation for a multiverse and the X-Men, it’s starting with some big moves on WandaVision.

Wanda’s powers seem to be changing

Since its first episode, WandaVision has slyly been rewriting what we know of Wanda’s powers. In her appearances in earlier Marvel movies, Wanda has wielded telekinesis (the ability to move things with her mind) and limited telepathy (the ability to read minds and project thoughts). WandaVision has broadened those abilities, showing her manipulating matter (like in the first episode, when she changed a chicken into eggs) and sometimes “rewinding” the show (like in the second episode, where she vanished the S.W.O.R.D. agent coming out of the sewer).

Wanda’s powers were once again a topic of conversation in episode five, as we learned they might be even greater than they seem.

In the episode, Darcy, Monica, and Agent Woo discuss what they know Wanda can do — move stuff with her mind and perform some mind control. But they also then realize that Wanda is manipulating matter. The three note that Monica went through the Westview energy field wearing a Kevlar vest, but when she was zapped out of it, it appeared that Wanda had changed the vest into a costume. She seemed to have done the same thing with a S.W.O.R.D. drone, which was changed into a toy helicopter. And Monica’s medical scans — which were taken after Wanda blasted her — were abnormal (the X-ray was blown out), suggesting that Wanda may have done something to her, too.

So Wanda might be changing things on an atomic level, which would be a pretty big deal. But the characters don’t really seem to be all that perturbed by this newfound skill, as it was never brought up again in the episode.

Regardless, these new wrinkles introduce a different way of thinking about Wanda’s powers. What if her powers are something like reality manipulation, which she possessed in the comic books, and the mind control and energy-blasting are just the ways they have manifested in the MCU? What if she’s capable of something greater? And what if she’s more powerful than anyone knows?

Going back to the idea of alternate realities, Wanda’s apparent ability to manipulate reality could tie in neatly with the theory of multiple parallel universes and introduce all kinds of quirks to the MCU. It also aligns with the House of M comic book event that the show is referencing quite heavily.

Granted, we still don’t know what is really happening or if Wanda’s ability to warp matter is real and permanent. There could easily be a plot like a villain controlling Wanda or making her more powerful than she seems. But it’s something to keep an eye on, especially since there could be implications for the future of the entire MCU.

Does increasing the tipped minimum wage actually help workers? 7 experts weigh in.
Online shopping has boomed in the pandemic. But what about all the packaging?
If you can stay home now, you make things safer for the people who can’t
Cary Joji Fukunaga is directing the new James Bond movie. Here are 3 things to know about him.
LGBTQ rights hang in the balance at the Supreme Court. Elizabeth Warren and Pete Buttigieg just rele...
How this chair became a pop culture icon