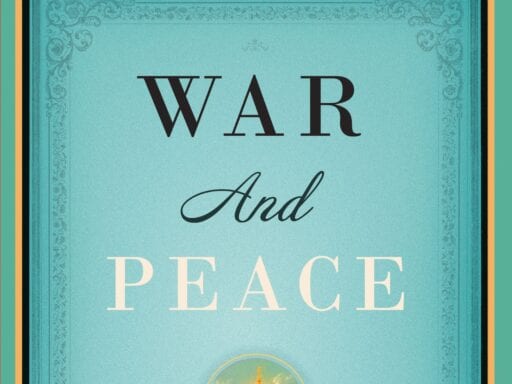 Leo Tolstoy’s epic might be the best book ever written, and — hot take here — you should read it.

It’s 1812 in Moscow. Napoleon has invaded Russia, and he gets nearer to the city every day. Emperor Alexander I has left the city behind, and its inhabitants aren’t certain of what to do next. So instead of taking precautions, in the absence of what feels like an authority figure who knows what he is doing, the people of Moscow instead decide to just have a good time.

This moment is depicted by Leo Tolstoy in his sprawling, intimidating novel War and Peace, where he writes (translation by Louise and Aylmer Maude):

With the enemy’s approach to Moscow, the Moscovites’ view of their situation did not grow more serious but on the contrary became even more frivolous, as always happens with people who see a great danger approaching. At the approach of danger there are always two voices that speak with equal power in the human soul: one very reasonably tells a man to consider the nature of the danger and the means of escaping it; the other, still more reasonably, says that it is too depressing and painful to think of the danger, since it is not in man’s power to foresee everything and avert the general course of events, and it is therefore better to disregard what is painful till it comes, and to think about what is pleasant. In solitude a man generally listens to the first voice, but in society to the second. So it was now with the inhabitants of Moscow. It was long since people had been as gay in Moscow as that year.

I read that passage in mid-July, and it stopped me dead in my tracks. I went back to read it again, then again — it felt so specific to the world of Tolstoy’s creation, but also to right now. What is living in the United States in 2020 but a society of people trying to disregard what is painful until it comes, in favor of thinking about what is pleasant?

All of the excuses people give for why they don’t want to read War and Peace — it’s crushingly long, it has 5 billion characters, it features long digressions about the nature of history (including a 35-page subtweet of the historians of Tolstoy’s day that ends the novel) — are fair. It is a long book, and it does have lots of characters. It takes a long time to read.

But you might have time right now. And what you’ll likely find as you get deeper and deeper into the book is that it’s wonderfully readable. At the plot level, War and Peace is an intricately designed soap opera about a handful of Russian families whose lives intersect and explode over the course of several momentous years, culminating in Napoleon’s invasion of Russia and the subsequent burning of Moscow in 1812. The book has battle scenes. It has romance. It has comedy — I was surprised by just how funny Tolstoy is, given the book’s reputation as a bore. It has plot twists galore.

And in the midst of all of that, you’ll find some of the most evocative writing in history — even if Tolstoy follows perhaps the book’s most famous passage (in which death is depicted from the point of view of a major character) with roughly 20 pages of arguing that Napoleon was totally overrated.

As I read, I felt like I could trace the way Tolstoy’s writing in War and Peace went on to influence film and television, especially in the way that Tolstoy writes from one character’s point of view until they meet a different major character, then hands off the narrative. The book feels, for all the world, like a Steadicam in a flashy movie with lots of long takes, following one actor for a while before it follows another. And it was all written decades before the invention of cinema.

There are reasons to read War and Peace beyond being able to brag about having read War and Peace. Those reasons are particularly pointed right now, at a time when it feels like society might need an unlikely miracle to be saved. Tolstoy is uniquely preoccupied with the nature of history and the ways in which history is directed not by great men but by large swathes of people, gathered together to assert their will upon the course of human events. Many times, collective movements fail. But sometimes, they succeed, and in so doing, they change the world.

Dramatizing the ways in which the small actions of lots of people add up to measurable impact is difficult, because our brains like to latch onto singular protagonists. Tolstoy’s solution to this predisposition is brilliant. Instead of portraying the sweep of history, he portrays the lives of ordinary people in the face of it. When he needs to zoom all the way out to talk about major events, he takes an extremely wide god’s-eye view, one in which the author himself is speaking with the 20/20 hindsight of someone looking at the past. But he rarely shifts the book’s framing into a medium range — say, depicting all of the movements within an individual battle — if he cannot center the knowledge of what’s happening within the perspective of one of his many indelible characters.

History, War and Peace argues, is created by human beings, who are in turn limited by history. You cannot entirely escape your circumstances, but you can hope to change them. The concepts of both free will and determinism are ultimately wrong, because you are a product of the world you live in, but you also can make tiny changes to that world. And those tiny changes combine with the tiny changes of others, which adds up to a movement. And when properly directed by a leader or a government, they might add up to something even greater still.

War and Peace understands that this is true for everyone. Napoleon is a mythic figure, but also just some guy. He eats and sleeps and shits like everyone else, and his ambitions and huge successes do not make him necessarily better or even more effective than any of us. Tolstoy doesn’t quite argue that Napoleon’s place at the head of a massive army that dominated Europe was a total accident, but he does argue that the army created Napoleon and not vice versa. We are all caught in the wave of history.

I read this book together with a friend, who remarked during our last discussion of it that right now, when she looks at the world around us, she feels a bitter pessimism mixed with tremendous optimism. It is so very easy to see all of the ways that the world our children grow up in might crumble into dust, but it’s also increasingly possible to see the ways in which ordinary people might seize an opportunity to build something better. History is written by no one, because history is written by everyone.

War and Peace has a great many themes, but that might be its central one: We are all people, writing the history that later generations will read about, even if we don’t realize it. Every action we take makes some small mark upon it, even if that mark is eventually (inevitably) erased. Nothing is certain, until it is. And that is when things change, for better or for worse.