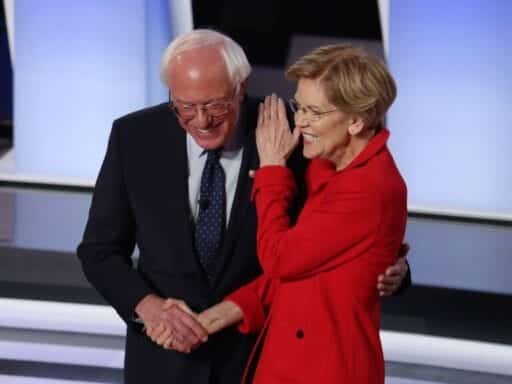 Warren and Sanders’ grassroots fundraising strategy is paying off.

Sens. Bernie Sanders and Elizabeth Warren are the powerhouses of the 2020 presidential campaign’s third-quarter fundraising — thanks primarily to small donors.

The Warren campaign announced Friday it had raised $24.6 million in the third quarter, per a memo from campaign manager Roger Lau. Warren’s impressive haul puts her slightly behind Sanders, who set the pace with $25.3 million announced earlier this week.

“Text a friend to share the good news,” Lau wrote. “Close your eyes and picture Wall Street bankers scowling into their catered breakfast.”

It’s a big win for two progressive candidates who have sworn off closed-door, high-dollar fundraisers in favor of a grassroots approach. Warren’s average donation amount was $26, compared to Sanders’s average donation of $18. Her campaign said they had over 940,000 individual donations in the third quarter, while the Sanders campaign reported 1.4 million individual donations in the same period.

If fundraising is a measure of enthusiasm, it’s safe to say Sanders and Warren are in an enviable spot as campaigns head into the last full quarter before the first primaries kick off. Both candidates have fundraised more than their field of competitors: Former Vice President Joe Biden’s campaign announced he raised $15.2 million in the past three months, South Bend, Indiana, Mayor Pete Buttigieg raised $19.1 million, and Sen. Kamala Harris raised $11.6 million.

Out of this group, Sanders and Warren are the only leading 2020 candidates who are trying to power their campaigns entirely on grassroots cash. Sanders tested this theory in 2016, when he ran against Hillary Clinton and was able to fundraise millions from small donors.

And a big emphasis of Warren’s campaign is the candidate forgoing any sort of VIP donor time to spend that time with voters. Warren is famous for her hours-long “selfie” lines at the end of events, and she regularly calls people who have chipped in whatever they can — even donations as small as $3 — to say thank you. Sanders, who was hospitalized this week after complaining of chest pain, has made similar appeals.

“We don’t have billionaires, fancy fundraisers or corporate interests funding our campaign,” he tweeted this summer, along with a link to donate to his campaign. “We have people like you — and that’s much more powerful.”

Warren’s and Sanders’s fundraising numbers may be proving that theory correct.

Biden is still one of the frontrunners of the 2020 presidential campaign, and but his most recent fundraising numbers pale in comparison to Sanders’s and Warren’s.

Biden’s campaign announced their $15.2 million third-quarter haul — which puts him in a stable, but far-from-impressive fourth place for the quarter — on Thursday night, after the former vice president disclosed them at a Palo Alto fundraiser. The event he spoke at cost attendees $1,500 or $2,800, and guests who had raised $10,000 were invited to a VIP reception with Biden, according to an invitation according to the pool report of the event.

Speaking in Palo Alto, Biden chalked up his lower numbers to the fact his campaign got started in April — later than other campaigns.

“We haven’t raised what a lot of people have — we got started way later than everybody else, but we’ve raised, this last quarter, $15 million, in the middle of summer,” Biden said.

Biden’s campaign has raised $36.7 million since their campaign launched. The campaign said the average donation this quarter was $44 dollars. Additionally, the Biden campaign said 98 percent of its campaign contributions were grassroots donations of $200 or less.

As Vox’s Andrew Prokop noted in July, none of this sounds a death knell for Biden, but “it’s not particularly impressive considering his advantages” as the best-known candidate coming into the race. Moreover, Biden and other campaigns like Buttigieg and Harris have also seen support from wealthy Democratic bundlers, unlike Warren and Sanders, and that could cause a potential problem for them:

Furthermore, since Biden is more dependent on big-donor fundraising than the other top-tier candidates, many of his supporters have already hit the $2,800 limit on what they can give him for the primary. So unless he broadens his fundraising base — either finding more and more rich people to pony up or striking more of a chord with small-dollar contributors — he could have trouble keeping up with the pack.

Sanders and Warren don’t appear to have that same problem, and the race between the two of them and Biden is only going to get more competitive.

Federal budget cuts are a blow to evidence-based medical training
A Russian newspaper editor explains how Putin made Trump his puppet
Amazon starts selling prescription drugs, with two-day delivery for Prime members
Trump is starting to pressure red-state Democrats to support his Supreme Court pick
6 John Lewis speeches key to understanding his work and legacy
Trump’s latest plan to use the census for political gain, explained