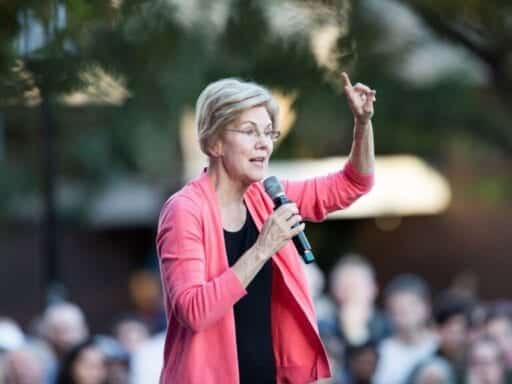 It would rewrite the rules of the labor economy.

Warren makes a long list of promises to close every loophole and fix every broken policy that has kept working families from getting ahead in the post-recession economy. Oh, and she wants to give workers new rights too, such as the right for gig workers to unionize.

“We cannot have a truly democratic society with so little power in the hands of working people,” she writes in her plan. “We cannot have sustained and inclusive economic growth without a stronger labor movement.”

The timing is key. Warren is releasing her proposal the day before a big presidential forum hosted by the Service Employees International Union. SEIU represents about 2 million janitors, home care workers, security guards, and childcare workers — and candidates have been jockeying for the union’s prized endorsement.

They’ve also been trying to outdo each other to win over working-class Americans. Most Democratic frontrunners have released detailed policy platforms that promise workers everything they’ve ever wanted: paid parental leave, a $15 minimum wage, and paid sick days are just the beginning.

In many ways, Warren’s ideas mirror some of Sen. Bernie Sanders’s proposals, like making it easier for workers to go on strike and letting unions bargain on behalf of an entire industry. But Warren also focuses on the minutiae — the little tweaks and changes that could make a real difference for working Americans.

There are three recurring themes to Warren’s plan: She wants to give workers more power, protect vulnerable workers, and crack down on companies that break US labor laws. Here are some highlights:

Warren is adamant about empowering workers

The word “power” is repeated more than a dozen times in Warren’s proposal. It’s even part of her plan’s name: Empowering American Workers and Raising Wages. A lot of Warren’s agenda focuses on strengthening unions, which would, in turn, give workers more leverage on the job. One of the big ideas she’s endorsing is the concept of sectoral bargaining, in which unions bargain not at the company level but at the sector level — negotiating for all workers in an entire industry rather than just one company or workplace.

This is an idea endorsed by SEIU. And while sectoral bargaining is common in Europe, it’s never been tried on a large scale in the US. The point is to remove the incentive for employers to stop their employees from unionizing, based on the fear that non-union competitors will have a cost advantage. Instead, all workers in the same industry would simply have the same minimum standard of pay and benefits.

Sectoral bargaining is the future of unions, according to Vox’s Dylan Matthews, and the concept also has support from Bernie Sanders, Beto O’Rourke, and Pete Buttigieg, among others.

Warren is also championing one of her signature congressional plans, the Accountable Capitalism Act. It would require billion-dollar corporations to reserve 40 percent of their board seats for employees. Like this, she argues, CEOs would be more likely to make decisions that benefit workers, not just shareholders or the bottom line.

“One of the companies that would be covered by this requirement is General Motors, where 46,000 workers represented by [United Automobile Workers] went on strike because of the company’s refusal to let workers get a fair share of the billions of dollars in profits the company has made,” she stated in her proposal. “Letting GM workers elect 40 percent of the company’s board would help ensure that workers get the wages and benefits they deserve.”

She also wants to extend the right to unionize to more types of workers, such as government employees and low-level company supervisors.

One of labor’s biggest priorities, passing the Protecting the Right to Organize Act, is also on Warren’s to-do list. The bill would ban “right to work” laws that allow employees to opt-out of paying union fees in unionized workplaces, even though they get the benefits of collective bargaining. Doing this would boost union finances.

Warren is also tackling the trifecta of terrible corporate policies that have eroded workers’ rights: non-compete clauses, no-poach agreements, and mandatory arbitration. She promises to work with Congress to ban non-compete clauses, which make it super-hard for workers to find another job in the same industry. She would also outlaw so-called “no poaching” agreements for major franchisors like McDonald’s and Burger King, which prohibit franchisees from hiring workers from another franchise in the same chain.

“These clauses depress wages and deny workers opportunities to find a better job,” she wrote.

And she promised to get rid of annoying arbitration agreements, which about 60 percent of non-union workers in the private sector have signed. These clauses force workers to take legal disputes to private arbitration, a quasi-legal forum with no judge, no jury, and practically no government oversight.

Clearly, Warren would need to get Congress to enact most of her ambitious proposals. But not everything on the list requires a legislative solution. For example, she said she would require all federal contractors to pay workers at least $15 an hour and would favor bids from companies with unionized workforces.

Perhaps more so than any other candidate, Warren has zeroed in on all the loopholes in US labor laws that deny basic protections to millions of workers. That includes Uber drivers, farmworkers, and home health aides.

She was the first presidential candidate to voice support for California’s AB 5 bill, which makes it harder for companies to misclassify employees as independent contractors. That simple misclassification is how construction firms, strip clubs, nail salons, and gig economy companies have managed to skirt US labor laws. Many of these employers haven’t had to pay independent contractors a minimum wage, overtime, health care benefits, and unemployment insurance until the law passed month.

Not only would Warren push for a national version of AB 5, she says she would also make misclassification a labor violation, instead of a just a tax issue.

She would also amend US labor laws that explicitly exclude farmworkers and domestic workers. And she wants to give undocumented immigrants the same federal rights as any other worker, to make sure they are not exploited and used to keep wages low.

In a surprising move, Warren’s plan also acknowledges an under-the-radar effort to outlaw discrimination against black natural hairstyles. This summer, California became the first state to prohibit employers and public schools from banning braids, cornrows, dreadlocks, and other black natural hairstyles. Warren wants to develop a rule that would interpret the Civil Rights Act the same way.

Penalizing employers who do bad things

None of Warren’s policy ideas will change much if employers aren’t penalized for breaking the law.

One key part of Warren’s plan involves boosting funding for agencies that enforce worker safety laws and other labor laws. That includes the US Equal Employment Opportunity Commission, the Occupational Safety and Health Administration, and the Department of Labor Civil Rights Center. “Each of these agencies plays a crucial role in enforcing worker protections and each is badly underfunded,” Warren writes.

She points out that in 1978, each OSHA inspector was responsible for safety inspections at the work sites with 60,000 workers. Now the number of workers they are responsible for has more than doubled.

Warren said she will push to increase the maximum penalties, though she doesn’t say by how much. She also plans to refer more egregious cases for criminal prosecution.

Warren claims that her new plan is the “most progressive and comprehensive agenda for workers since the New Deal.” If she could wave a magic wand and make it all happen, sure, it probably would be. But that’s Warren’s biggest challenge: persuading a potentially divided Congress to pursue her ambitious ideas. Not everyone will be onboard.

Millennials have dinner parties, they just don’t call them that
How social justice slideshows took over Instagram
6 reasons smaller companies want to break up Big Tech
Here’s how Bernie Sanders handled a pointed question about Soviet communism
Hannah Gadsby on comedy, free speech, and living with autism
How Netflix’s Unbelievable turns a true story about rape into a must-watch TV