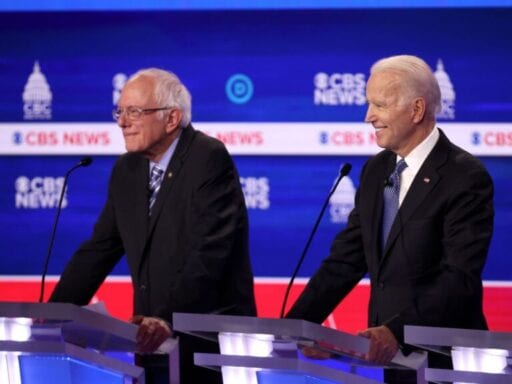 Just two candidates will take the stage in Washington, DC, for the 11th debate of the Democratic primary.

With just days until another major round of primaries — in Arizona, Florida, Illinois, and Ohio on March 17 — former Vice President Joe Biden and Sen. Bernie Sanders will take the debate stage in Washington, DC, this Sunday, March 15, for the 11th — and possibly last — debate of the Democratic presidential primary.

The debate will start at 8 pm ET and is scheduled to run for two hours. It will stream live on the CNN site and app.

CNN and Univision are co-hosting the debate, which the Democratic National Committee is holding in partnership with CHC Bold, a political action committee affiliated with the Congressional Hispanic Caucus. CNN’s Dana Bash and Jake Tapper, along with Univision’s Ilia Calderón, will moderate.

The debate was originally scheduled to be held in Phoenix, Arizona, ahead of that state’s primary but was moved over concerns about the Covid-19 coronavirus pandemic.

The qualifying standard for the 11th debate — candidates are required to have earned at least 20 percent of the pledged delegates that have been already awarded — means that Rep. Tulsi Gabbard, the only other candidate still in the race, failed to qualify.

As Biden and Sanders take the stage, the stakes are high. Biden is in a good position to potentially claim the Democratic nomination after a strong performance last week in six states, including crucial Michigan, and the states holding contests Tuesday, particularly the delegate-heavy Florida, favor him. If Sanders wants to keep his shot at the nomination alive, he’ll need a good debate performance to revitalize his campaign heading into the final stretch of the race.

This debate could also be the last: While the DNC’s framework calls for 12 debates, with the last in April, No. 12 hasn’t been scheduled yet. And there’s a very real possibility that a candidate could have the nomination sewn up by then.

Follow along below for Vox’s debate coverage, including how to watch, breaking news updates, analysis, and more.