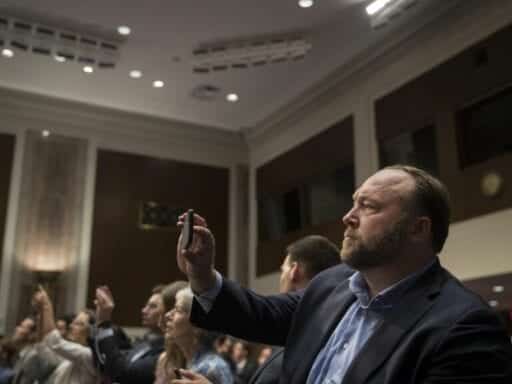 Jones called Rubio a “frat boy” and a “snake.” Rubio told him, “I’ll take care of you myself.”

Florida Republican Sen. Marco Rubio and conspiracy theorist Alex Jones had a tense exchange in the Senate hallway during a break of the Senate Intelligence Committee’s hearing with Facebook and Twitter leaders on Wednesday. Jones, who sat in on the hearing, crashed a scrum Rubio was holding with reporters, and the pair nearly came to blows.

Jones, an alt-right figure with a broad reach online, has complained that social media sites have censored him after multiple platforms, including Facebook, YouTube, and Twitter, banned or removed his content. He attended Wednesday’s hearing, he said, to “face his accusers,” and during the break he approached Rubio while the senator was addressing reporters and broke into Rubio’s comments repeatedly.

Jones pushed the senator to address concerns that conservative and far-right voices are being silenced online. At first, Rubio tried to ignore Jones and talked over him. Jones called him a “frat boy” and a “snake.” Jones also plugged his website, Infowars.com.

Rubio laughed him off, saying he didn’t know who Jones was — until Jones made physical contact, apparently touching him on the shoulder.

Heated exchange between Rubio and Alex Jones in the Senate hallway — Jones crashes a Rubio interview and touches Rubio’s shoulder. Rubio tells Jones not touch him again, says he’ll “take care of you myself” rather than calling the police.

“Don’t touch me again, man. I’m asking you not to touch me,” Rubio said.

“Well, sure, I just patted you nicely,” Jones said.

Jones talked over him, saying he wanted him to be arrested, and Rubio said he didn’t know who Jones was.

Jones, surprised, looked at reporters and said, “Oh, he’ll beat me up.” He told Rubio he wasn’t “going to silence me” and called him “a little gangster thug.”

Wow, this video. Alex JONES calls RUBIO a “frat boy” and touches Rubio on the shoulder. Rubio tells Jones not to touch him and that he won’t be arrested because I’ll “take care of you myself.”https://t.co/AGRMrDBMGa

It was a bizarre moment, but also a symbolic one: Rubio is a “reform conservative” who’s perpetually trying to change the subject from President Donald Trump to talk about policy. Jones is a far-right conspiracy theorist whose show hosted Trump during his campaign for the Republican nomination. But the contrast between the two styles on the right usually doesn’t almost come to blows.

Jones, fellow alt-right activist Laura Loomer, and internet troll Chuck Johnson all attended the hearing, which featured Facebook COO Sheryl Sandberg and Twitter CEO Jack Dorsey, apparently in an attempt to draw attention to themselves and the fact that they’ve been banned from social media platforms for violating their rules. (Vox’s Jane Coaston has a complete explainer on Jones being banned from tech platforms.)

Inside the hearing, their behavior was tame; outside, as Jones’s exchange with Rubio shows, not so much.

Today is historic. I am inside the Senate building on Capitol Hill with @RealAlexJones for the Social media hearings. Together we stand against big tech censorship. Today we stand for the Silent Majority! You can’t bully us @jack @facebook! #StopTheBias pic.twitter.com/uga6IdHmZe

Self-care at the end of the world
The latest poll from Trump’s favorite pollster is very bad news for him
Every season of American Horror Story so far, ranked
CSAs for the 1 Percent
Hunter Biden, the black sheep who got Trump impeached, explained
Trump rewrites history, calls pre-riot speech “totally appropriate”