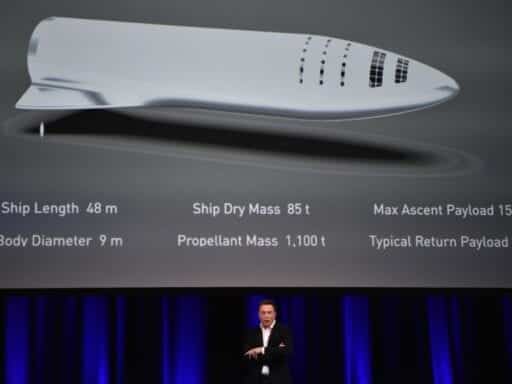 No human being has flown near the moon since December 1972, when the Apollo 17 mission returned to Earth. Elon Musk, via his rocket company SpaceX, wants to change that.

On Monday night, amid much fanfare, Musk will reveal the name of “the world’s first private passenger to fly around the Moon.” The mystery passenger is expected make the journey aboard SpaceX’s Big Falcon Rocket, an enormous 348-foot-tall launch vehicle that’s still in development and isn’t expected to be ready for flight until at least 2022.

SpaceX hopes the Big Falcon Rocket — a.k.a. the BFR — will be a go-to launch vehicle for spaceflight to the moon and, one day, to Mars (though we don’t think it would be a very fun place to go).

If this all sounds familiar, well, it’s because Musk has announced a similar thing before. As The Verge’s Loren Grush reminds us, “In February 2017, Musk announced that the company had signed two paying customers to fly around the Moon” on the Falcon Heavy rocket sometime in 2018. That didn’t happen.

You may recall that the Falcon Heavy did launch for the first time this past year, but wasn’t carrying humans or traveling to the moon. Instead, it ejected a bright red Tesla convertible into orbit around the sun. It’s unclear if Monday’s announcement will name one of those paying customers, or someone else entirely. Also unclear: Is this person going alone?

Who knows, it could be you, dear reader. How exciting would that be! Watch the announcement here at 9 pm ET.

Whatever is announced tonight, remember that Musk is known for wildly ambitious plans that attract a lot of media attention, as well as wildly ambitious timelines that often are way overblown.

And lately, he’s been getting attention for his venomous tweets, odd public behavior, and outbursts at reporters. Today, a British cave diver who helped free the trapped Thai soccer team this past summer, sued Musk for calling him a “pedo” and “child rapist” on Twitter. (Musk had previously told BuzzFeed News, “I hope [Vernon Unsworth, the diver] fucking sues me.”)

Musk has also been dealing with troubles at his electric car company Tesla, which has been struggling to keep up with production. Investors sold off shares of the company after Musk appeared to smoke weed on the Joe Rogan Experience podcast. Meanwhile, in a seemingly unrelated incident, the chief accounting officer of the company resigned.

Perhaps tonight Musk will return to doing what he (usually) does best: getting people excited about the future. And if Musk and SpaceX can finance — and follow through on — the plans, it would make history. As the Atlantic points out, the only people who have ever been to the moon are white American men. This could be an opportunity to change the face of space exploration.

US airstrike kills Iranian Gen. Qassem Suleimani: what we know
Joni Ernst walked back her call for Joe Biden to be impeached if elected
If you need quick comfort, try reading a cookbook like it’s a novel
Canada just legalized marijuana. That has big implications for US drug policy.
A Michael Bloomberg presidential run is unlikely to help moderate Democrats’ cause
The risks in going to the gym during the coronavirus pandemic, explained by experts