Watch: Nancy Pelosi fires back at reporter who asked if she hates Trump 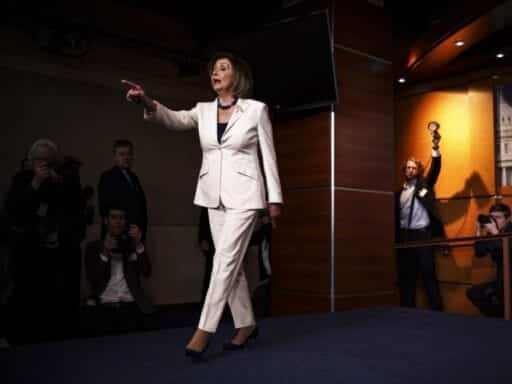 Share
Loading...
Speaker of the House Rep. Nancy Pelosi (D-CA) reacts to a reporter’s question about whether she hates President Trump during her weekly news conference, on December 5, 2019. | Alex Wong/Getty Images

Hours after she announced that House Democrats will draft articles of impeachment against President Donald Trump, House Speaker Nancy Pelosi held a news conference that ended on a remarkably contentious note.

As she walked away from the podium, Pelosi was asked by James Rosen of Sinclair Broadcast Group if she is moving forward with impeachment because she has personal animus for Trump.

“Do you hate the president, Madame Speaker?” Rosen asked, alluding to comments House Judiciary Committee ranking Republican Doug Collins made on Fox News on Wednesday about how Democrats are purportedly only moving toward impeaching Trump because “they don’t like him.”

Pelosi, however, was having none of it.

“I don’t hate anybody,” she said, pointing at Rosen. “Do not accuse me.”

Rosen, wearing a striped tie, can be seen on the left of the photo below with a notebook in his hand. He tried to clarify to Pelosi that he asked the question not to accuse her of anything, but because “Collins yesterday suggested that Democrats are doing this simply because they don’t like the guy … I think it’s an important point.”

“That has nothing to do with it,” Pelosi replied, before walking back to the podium to explain her position in more detail.

“I think the president is a coward when it comes to helping kids who are afraid of gun violence, I think he is cruel when he doesn’t deal with helping our Dreamers,” she said. “I think he’s in denial about the climate crisis. However, that’s about the election.”

Impeachment, she said, is about something different.

Watch the full scene for yourself:

Wow. Pelosi takes umbrage at a reporter asking her, “do you hate the president?” as she walks away from the podium.

“I don’t hate anybody,” she says. “This is about the Constitution … as a Catholic, I resent you using the word ‘hate’ in a sentence that addresses me.” pic.twitter.com/sh5DpoccRS

Pelosi then walked away, ending her news conference and bringing to a close a scene that prompted a reporter in the room to mutter, “holy shit.”

Sinclair owns a massive network of local TV affiliates that have distinguished themselves in recent years with “must-run” segments that echo Trump’s stridently anti-media rhetoric. Rosen came to Sinclair from Fox News, which he left last year amid allegations he made sexual advances toward a number of female colleagues.

During other parts of her news conference on Thursday, Pelosi took pains to push back on the idea that Democrats’ move toward impeaching Trump is motivated by politics.

“This has absolutely nothing to do with politics. It isn’t about politics, partisanship, Democrats, and Republicans,” she said. “It’s about the Constitution of the United States. The oath of office we take.”