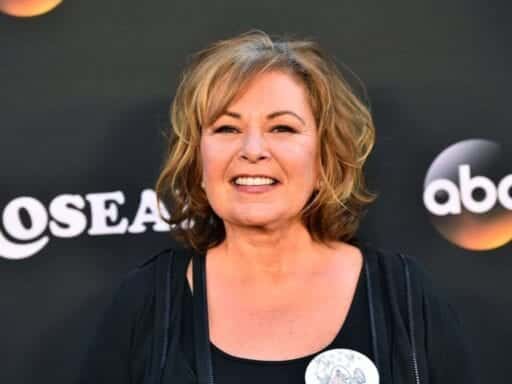 In a clip uploaded to her YouTube channel, an exasperated Roseanne Barr yells, “I thought that bitch was white!”

Just when it seemed as though the book was closed on Roseanne and the controversy that brought about the show’s cancellation, its star Roseanne Barr may be adding a new chapter. On Thursday, a video was posted to Barr’s personal YouTube channel in which she “explains” the offensive tweet that started the ordeal by screaming into the camera, “I thought the bitch was white!”

The video comes a little over a week after Barr announced and then canceled a TV appearance to discuss her racist tweet about White House senior adviser Valerie Jarrett, who worked under Barack Obama. In the since-deleted tweet, Barr wrote that Jarrett looked like “the muslim brotherhood & planet of the apes had a baby.” Following the backlash to Barr’s comment, the show was canceled. A statement from Channing Dungey, president of ABC Entertainment, called the tweet “abhorrent, repugnant, and inconsistent with our values.”

Since then, Barr has apologized for the tweet, saying, “I apologize to Valerie Jarrett and to all Americans. I am truly sorry for making a bad joke about her politics and her looks. I should have known better. Forgive me-my joke was in bad taste.” She has also attempted to defend herself on multiple occasions, by claiming she was “Ambien tweeting” and insisting that the tweet was about anti-Semitism.

Meanwhile, ABC has moved on from Roseanne with plans to produce a spinoff of the series called The Conners, in which Barr will have no involvement.

After a lot of thought, I decided that I won’t be doing any TV interviews, too stressful & untrustworthy 4 me & my fans. I’m going to film it myself & post it on my youtube channel in the next week-the entire explanation of what happened & why! I love you all-sign up & get ready.

The new video is strange for many reasons. Not only does it not deliver on Barr’s recent promise to offer “the entire explanation of what happened & why!” but it paints her in an even worse light — and that’s putting it nicely.

The minute-long clip begins with someone off-camera advising Barr to imagine as if she’s giving “a presidential address” after being “busted with killing a hooker” (and then alluding to Bill Clinton’s infamous statement about Monica Lewinsky, “I did not have sexual relations with that woman” — which, it should be noted, turned out to be a lie).

Barr has yet to issue any other explanation for the bizarre video, but it’s safe to say that it does not help her cause. Whether there is more “explanation” still to come remains unclear, though at this point it seems Barr is only adding more fuel to the fire.