Watch: the 6 best performances from the 2019 VMAs 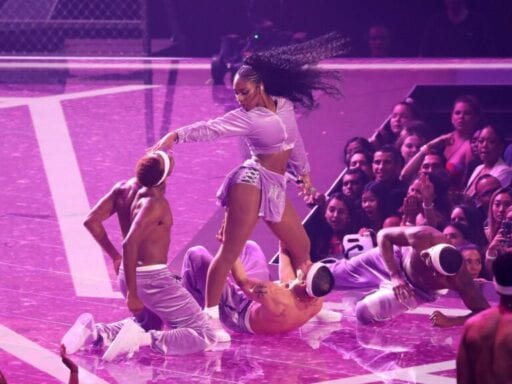 Oh, 2019 VMAs. You left us with so many unanswered questions.

Why were you held in Newark? Why did you keep acting like it was exciting that you were held in Newark? Did you think that maybe it would distract us from the downright tragic moment when it became clear that even Newark thinks MTV is a little bit passé these days? (It did not.) Why were you hosted by a walking spray tan with no name recognition? Why did you keep cutting away from Missy Elliott dancing on the stage to show us Taylor Swift dancing in the audience? (No shade to Taylor, she’s just not Missy Elliott.) VMAs, we’re all friends here, so seriously … are u ok????

Okay or not, at the very least, the VMAs did feature a few fantastic performances. Every so often in this long, long ceremony, something otherworldly would light up the stage and make us remember why we watch this show every year.

Here are the six best performances from the 2019 MTV VMAs.

It is VMAs tradition for the recipient of the Video Vanguard award to give an extended performance to remind us of what makes them so great. And Missy Elliott’s medley as 2019’s Video Vanguard honoree was a stunning example of the form. Elliott gave us the giant trash bag look from her iconic video “The Rain” and created live-action spectacles of her dance hits, including turning “Pass the Dutch” into an alien invasion with people literally getting beamed up into a spaceship hovering above the stage. Elliott’s relentless performance made a strong case for re-naming the award the Missy Elliott Video Vanguard Award from this point on.

After a lackluster opening monologue, the VMAs badly needed a punch of energy. Luckily, Lizzo was there to provide it — with a giant inflatable ass and a gospel choir for backup, because like all the best musicians, Lizzo knows how to move seamlessly from the profane to the sacred. But mostly, we’re okay calling her sacred, because she saved us from a truly flaccid first half hour to this ceremony. It’s like she knew that we, like her, were just tired of the bullshit.

Normani started the summer as the Harmony with something to prove. Camila Cabello, the first Harmony to leave Fifth Harmony, has had a successful last couple of years as she churned out an inescapable hit in “Havana” and collaborated with boyfriend Shawn Mendes for “Señorita,” another chart-topping hit (the duo performed the song at the VMAs, but it felt more like a made-for-MTV showmance than an exhibition of their talent).

Enter Normani with “Motivation,” a sweet and bouncy bop that evokes pre-visual album Beyoncé, and its video with Normani dancing a storm, seemingly defying the laws of physics and gravity. Normani transported the infectious, buoyant energy from that video to her VMAs performance, dancing and working every inch of the stage. On a night where many artists performed like it was a chore for them to be there, Normani took the opportunity to show us just how much fun she’s having.

After delivering what was by any measure the song of the year — and making it official tonight, when he won the trophy for Song of the Year — Lil Nas X would have been well within his rights to just give the people what they want by performing “Old Town Road” for the nth time at the VMAs. Instead, he brushed that idea aside in a winking prerecorded opening that saw “President Lil Nas X” dropping a 3162nd remix of “Old Town Road,” and then moved straight into new material off his recent EP: “Panini,” his ode to the cartoon rabbit of the same name from Cartoon Network’s Chowder. Between the omnivorous pop culture references and the Tron-inflected dancers, Lil Nas X showed off exactly why he’s the brightest young star to make it from TikTok to the top of the charts.

Miley Cyrus got her requisite VMAs scandal out of the way in 2013, when she twerked next to Robin Thicke with a giant foam finger. So this year, she was free to go stripped-down and simple in a monochromatic and spare performance of “Slide Away” that shied away from production pyrotechnics and showcased her incredible vocals instead. It was her first public performance since she announced her separation from husband Liam Hemsworth, and it was lovely and poignant.

The dominant theme of the 2019 VMAs was honoring New Jersey’s influence in pop culture. This was ostensibly since the show was taking place in Newark, and it translated to lots of shopworn jokes about being Italian (e.g.Italians have lots of cousins), and remembering famous fictional Italians like the Sopranos. But a much more effective variation on the New Jersey theme — and one of the best performances of the night overall — was the finale, in which the VMAS brought together Naughty by Nature, Redman, Fetty Wap, Queen Latifah, and Wyclef Jean to show how these rappers and musicians, all New Jersey natives, nurtured and put their own spin on hip-hop, and how the Garden State never got its due for moving the genre forward. They brought out the best in each other and did New Jersey proud.