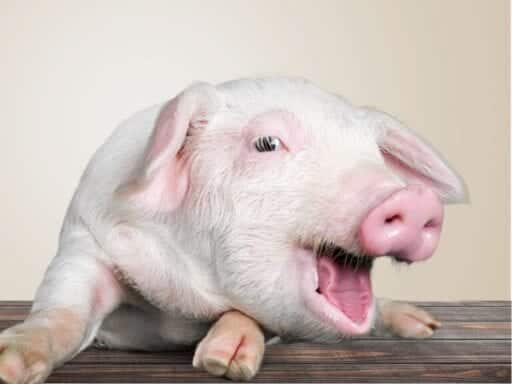 Chimpanzees. Elephants. Crows. Dolphins. All these animals have been observed using tools, a behavior that’s often seen as a hallmark of intelligence. But we’ve never had a record of a pig engaging in such activity without human prompting — until now.

New evidence shows that pigs are smarter than you might think.

In 2015, Meredith Root-Bernstein was hanging out at a zoo in Paris, checking out a group of pigs, when she saw one of them do something interesting: It held a piece of bark in its mouth and used it to dig in the dirt.

“I said, ‘Whoa, that’s pretty cool,’” she later told National Geographic. “When I looked up tool use in pigs, there was nothing.”

These were Visayan warty pigs, an endangered species native to the Philippines, which every six months build cozy nests in the soil to accommodate new piglets. Root-Bernstein, an ecologist and visiting researcher at the Musée de l’Homme in Paris, had a hunch that the tool use she observed had to do with nest-building.

About six months later, a colleague of hers went to visit that same enclosure at the Jardin des Plantes. This time, they saw three of the pigs using tools to make their nest.

Now, a piece of bark may not seem like much of a tool. But Root-Bernstein, who wrote up her findings in a study published last month in the journal Mammalian Biology, notes that the way the pigs used the bark satisfies the scientific definition for tool use: “The exertion of control over a freely manipulable external object (the tool) with the goal of (1) altering the physical properties of another object, substance, surface or medium … via a dynamic mechanical interaction, or (2) mediating the flow of information.”

Root-Bernstein and her colleagues studied the pigs over the course of three years; they hypothesize that the use of bark or sticks to dig with may have been socially learned through vertical transmission (mother to daughter) as well as horizontal transmission (female to male). The researchers noticed that the mother pig, named Priscilla, was particularly fond of using tools in the middle of the nest-building procedure.

Some scientists, like Rafael Reyna-Hurtado, have cautioned that this study has a very small sample size — four pigs that used tools a total of 11 times — and it rests on animal behavior observed in a zoo rather than in a natural habitat. Nevertheless, Reyna-Hurtado said this research should encourage other scientists to see if they can observe tool use among bigger groups of wild pigs.

Root-Bernstein acknowledges her data set is small, and that the behavior occurred in captivity, which can cause animals to act differently than they do in the wild. She notes, however, that most captivity-induced behaviors are marked by frequent repetition, such as pacing, but that this tool use was scarce and occurred only within the specific context of nest-building.

A few years ago, Gutierrez witnessed a group of wild pigs pushing rocks toward an electric fence to test it. “As soon as they push and the rocks make contact, they would wait for the clicking sound or absence thereof,” he said by email. “Clicking means the wires are hot, and they will back off and not cross; no sounds mean it is safe to investigate what’s beyond the wire.” They’re “smart little buggers,” he says.

Studies like Root-Bernstein’s are important because they can challenge our conventional views of which animals possess intelligence and to what degree. When we attribute a higher degree of intelligence to an animal, we’re more likely to include it in our moral circle, the imaginary boundary we draw around those we consider worthy of ethical consideration. (Some would argue intelligence shouldn’t be the standard for inclusion in the moral circle, though — perhaps being sentient or even simply being alive is enough.) If we start to see pigs as creatures that are akin to us, it could change how we treat them.

And on that note, it’s worth mentioning that while Root-Bernstein has recorded the first unprompted tool use in pigs, we’ve already got an example of a pig that’s been prompted by humans to use tools — to awesome effect.

When Pigcasso, a hog rescued from a factory farm in South Africa, displayed a liking for the paintbrushes strewn about her stall, her rescuer decided to train her — using a positive-reinforcement technique involving food rewards — to actually make paintings. Pigcasso has since sold several artworks and has even had her own exhibition, which is more than most of us can say.

Here’s what Alexa and other smart speakers say about the coronavirus
Why fashion brands destroy billions worth of their own merchandise every year
After Pittsburgh, the interfaith response sends message of solidarity across the religious divide
Savannah Guthrie delivered the Trump interview we’ve been wanting for years
The New York Times’s Trump-bashing op-ed from a senior Trump official, explained
What it’s like to deliver legal pot for a living