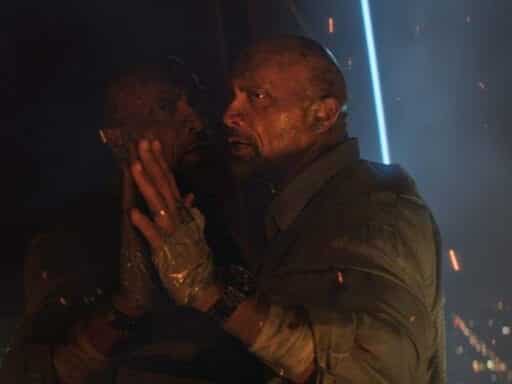 A family man makes good use of duct tape in an otherwise standard-issue Hollywood action film.

Possibly all you need to know about Skyscraper is contained in this moment: our hero, a fire and safety inspector and doting father of twins — played by Dwayne “The Rock” Johnson — pauses midway through rescuing his family from a burning ultra-high skyscraper to crack a joke about how “if you can’t fix it with duct tape, you’re not using enough duct tape.”

In related news, I’m not sure why the release wasn’t timed to Father’s Day.

Skyscraper is, basically, another action movie expressly designed to star The Rock — which I’m not mad about! If Hollywood’s going to rely on one guy as the stock American hero type, he seems like a pretty decent one to go with.

It’s also another example of what I think of as a “video game” movie. It’s not a movie based on a video game (those are pretty much always bad), but one that takes the basic form of a simple video game, in which you play as the hero and are presented with an objective and a set of challenges, including a boss fight at the end.

Every challenge is overcome, but then the hero is presented with a new twist or challenge. And just like in a game, elements that will help the hero are seeded early on, placed strategically so that you’ll forget they’re there right before the hero needs them.

Is that a bad thing? Nah. But it’s not a particularly creative thing, either. The big difference between this kind of video game movie and an actual video game is that you’re not playing it — you’re just passively consuming it, and you know how it will end before it gets going. So any surprise or intrigue comes from just seeing how our mighty protagonist will get himself out of this scrape. That’s just enough for a couple hours of fairly mindless entertainment.

But should we ask for more? Maybe.

Skyscraper was clearly pitched as “Die Hard meets Towering Inferno, but with The Rock.” Will Sawyer (Johnson), a former FBI hostage negotiator who lost a leg in a harrowing incident, gave up the bureau, married a former military doctor named Sarah (Neve Campbell), and settled into a quieter life of running his own inspection business and raising twins, Henry (Noah Cottrell) and Georgia (McKenna Roberts).

The whole family takes a trip to Hong Kong, where Will has gotten a job inspecting the safety of the world’s highest skyscraper by a long shot — the crown jewel of Chinese mogul Zhao Long Ji (Chin Han). It’s a 200-story building, still mostly empty; the bottom half is commercial, and the top half is intended to be residential, though at the moment it’s basically just the Sawyers and Zhao staying there. There’s also a “pearl” at the top, a giant sphere that is the source of much speculation.

Thanks to an old buddy (Pablo Schreiber), Will has nabbed the contract to inspect the building. But he soon gets caught in the crosshairs of an overly elaborate plot involving competing crime syndicates and various people they employ, some of whom are after an object in Zhao’s possession. Someone has decided the best method is to light a fire halfway up the skyscraper. And so they proceed.

It’s all muddled, but the reasons don’t matter; it’s basically an excuse to put Will in a position where he must single-handedly save his family from the skyscraper, pursued by police who are convinced he started the fire himself. He gets a serious assist from Sarah, who knows how to fight back and also, helpfully, can speak Chinese.

But the goal is clear: rescue his kids. For about two hours, that’s what we are here to watch him do.

Skyscraper is predictable, but hollow

Will’s prosthetic leg, Sarah’s ability to speak Chinese, Will’s knowledge of the building’s various fire and safety systems, and a joke early on about Sarah’s inability to simply reboot her phone when it breaks — they’re all textbook Chekhovian guns. Everything Will is going to need to pull off this mission (and set up a couple of jokes) is carefully put in place in the movie’s first 15 minutes or so, then picked up when needed.

The result is a competent action film that serves up some properly nail-biting moments. (If you are vertigo-prone, and somehow didn’t guess from the movie’s title that there’d be a lot of swinging around waaaaaay above the ground, well — now you’ve been warned.)

It’s also a PG-13 film, which is relevant mostly because the MPAA dictates two things about such films: you’re generally limited to about one f-bomb (which the movie uses), and you can’t have anything too graphic on screen.

But a lot of people die in Skyscraper. Not just bad guys, either — technicians and civilians, too, collateral damage on the fringes of the Sawyer family’s saga, news coverage of which the crowd in Hong Kong watches projected on giant screens, cheering and clapping as the cameras zoom in on Will’s valiant and ingenious rescue attempts.

What that news coverage doesn’t capture is the mayhem, destruction, and loss of life, which is why people can simply root for their onscreen hero. And though we’re watching all that happen, it happens mostly bloodlessly, in the manner of PG-13 action movies. People die fast and without much in the way of visible injury. Unless one of our main characters gets shot — then, we see blood, because it makes us feel.

That callous disregard for most characters’ loss of life marks many Hollywood action films, I know. But when your central character is a guy like Will — a family man, a caring husband and devoted father, and a man who is so rattled by an act of violence he saw earlier in his career that he’s still haunted by it — you’d think he’d feel something. In a movie that tries to make such a trenchant point of its hero’s moral uprightness, it seems a little weird to leave all that ethical material on the table. At the least, you’d think the film wouldn’t be so unironically triumphant.

But the thing is that Will, in the end, is not a movie character; he’s the protagonist of a video game, the sort without much character development or moral inquiry. He’s a standard-issue American hero. We’re there to watch him do crazy stuff, and he delivers. Just don’t think too hard, or it might start to fall apart.

Skyscraper opens in theaters on July 13.