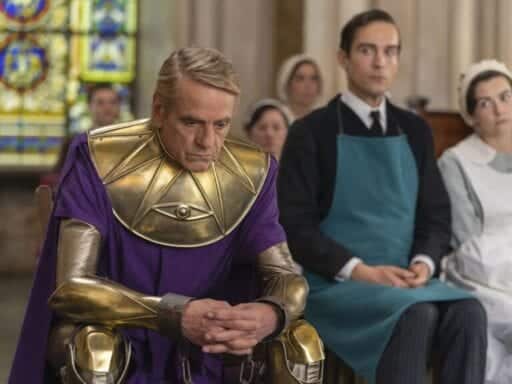 Adrian Veidt explains why he isn’t happy in “heaven.”

Comic book superhero stories on the big screen have made a tradition out of the post-credits scene, a cliffhanger that dramatically teases the next installment in the series. Taking a page out of their book, HBO’s Watchmen has its own addendum tacked on after the credits roll on episode eight, “A God Walks Into Abar,” the second-to-last episode of the season.

These credits scenes usually tease out the next movie, or give fans an Easter egg that introduces wrinkles to the ongoing narrative (think the scene after the credits of Thor: Ragnarok, when the Asgardians run into Thanos, which immediately leads into Avengers: Infinity War.) But Watchmen isn’t a movie; it’s a television series, and one that’s far from your typical comic book superhero story either way.

The post-credits scene at the end of episode eight is so extensive that it might as well have been another scene during the episode proper. But it focused on Adrian Veidt, a.k.a. Ozymandias, and given that the episode was Cal and Angela-centric, it’s not totally surprising that it was tucked away after the credits rolled.

In episode eight, Doctor Manhattan explains how he turned Europa, one of Jupiter’s moons, into a utopia habitable enough to sustain human life. But he tells Angela he’s lost interest in being a god there, despite its perfection. He chose to leave space and return to Earth after years away.

Before doing that, Doctor Manhattan has the idea that Europa could be a place to hold Veidt, the smartest man on Earth who has already played god once — when he staged the devastating giant squid attack that nonetheless helped fend off World War 3 in 1985. Doctor Manhattan believes that a world of endless adulation and obedience would be great for a self-obsessed, nervy man like Veidt.

As we’ve learned about Veidt over the last seven episodes, he’s grown tired of life there, too, and is trying to find a way to leave. Veidt’s escape seems a little impossible at the moment without the help of Doctor Manhattan who happens to be captured by some kind of hi-tech cannon. But the post-credits scene gives us a small hint of how Veidt might manage to escape.

The scene opens with Veidt’s clones smashing tomatoes on his head asking their master if he will please stay with them on Europa. He says no, and as a sign of disgust, they smash tomatoes on his head. Veidt seems to be subjecting himself to this to break free from the monotonous adoration from the clones, proving Doctor Manhattan wrong about Veidt’s seemingly unending self-absorption.

We then see Veidt, now jailed in a cell to stop him from escaping, as he’s visited by the Game Warden, a clone high standing who has with him one of Veidt’s signature yellow-and-purple tiered cakes. The Game Warden reveals that he is the first being that Doctor Manhattan ever created, which seems to explain why he’s so unlike the other clones. He challenges Veidt, asking him what’s so wrong with the utopia they have before giving him the cake and wishing him a happy anniversary. It’s an anniversary like those other anniversaries that Veidt has already celebrated in previous episodes.

“Heaven doesn’t need me,” Veidt says, expressing his desire to return to Earth and to feel human again.

The Game Warden, displeased with Veidt’s lack of gratitude, leaves. And just when Veidt looks like he’s going to remain in this jail for the foreseeable future, he finds a horseshoe inside the cake. He then begins to dig maniacally.

It sure seems like Veidt’s subjects are trying to help him bust out of jail, and ostensibly get him back to his home planet. Perhaps he’s taught them to subvert authority, to his benefit. We don’t know exactly what Veidt is digging for or what exactly he’s hoping to find, but it seems to indicate that it’s one part of the puzzle of getting back to Earth.

Irish election yields stunning three-way tie — and a Sinn Féin surge
Anne Hathaway’s thoughts on Nia Wilson’s murder are really worth reading
Trump’s White House is doing a bad job contact tracing its Covid-19 cluster
What the first ladies have to say about 'zero tolerance' immigration policy
What’s in a name? From Aunt Jemima to the Redskins, enough ugly history to demand change.
I’ve read the plans to reopen the economy. They’re scary.

New York gave every detained immigrant a lawyer. It could serve as a national model.