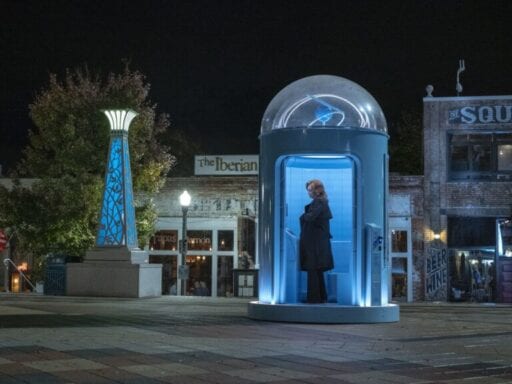 Watchmen’s third episode belongs to the one and only Laurie Blake.

The third episode of Watchmen belongs to Laurie Blake.

In her first appearance on the show, Laurie (played by Jean Smart, whose swath of TV credits range from Fargo to Frasier) somehow manages to upstage all matter of exciting events: main protagonist Angela (Regina King), saving 20 or so people from a suicide bomber at a funeral; the reveal that Jeremy Irons’s mystery character is Adrian Veidt; and the gnawing mystery of whether Will (Louis Gossett Jr.) killed Police Chief Judd Crawford (Don Johnson). Laurie even manages to make us almost forget about the big question from the end of episode two: Who or what took Will into the sky?

Smart’s Laurie Blake, a sharp-shooting FBI agent, is called into Tulsa from DC to investigate the death of Judd Crawford and figure out if it was the work of a vigilante. She takes no prisoners, has no time for nonsense, and, in one fell swoop, puts the entire Tulsa police force on edge. While there’s true delight in watching Laurie chew men up and spit them out, there’s also a secondary layer of pleasure in watching a character that Alan Moore and Dave Gibbons created in Watchmen find a new life onscreen.

When we first meet Laurie in the episode, she’s calmly staging a sting at a bank to catch a law-breaking vigilante. Then, after a visit from Sen. Joe Keene (James Wolk), she and the FBI are called into Tulsa to investigate whether or not a vigilante is responsible for killing Police Chief Judd Crawford. With how easily she dispatches vigilantes (it’s her day job, after all), Laurie’s confident arrival is like a storm rolling into Oklahoma.

But we don’t know exactly who Laurie is or how this woman became such a force when we first meet her. Though we do get a hint about her past, pre-FBI life from Agent Petey, the fanboyish FBI agent who is quickly promoted from the kid manning the projector to the backup that accompanies Laurie to Tulsa. He tells her, point blank, on their way into the city about how much he knows of her involvement with the storied events of 1986 and what happened with Rorschach to make him such a symbol for white supremacy.

What Petey is obliquely referring to, in a meta way, is Laurie’s adventures in the Watchmen graphic novel. HBO’s take isn’t a straightforward sequel and is set 33 years after the comic book, but it’s clear that the comic’s events happened and have ramifications in this world — albeit with varying degrees of irreverence.

When we’re first introduced to Laurie in the comic books, she goes by Laurie Juspeczyk. She’s the daughter of Sally Jupiter, who was the female superhero known as Silk Spectre and once fought as part of the premier supergroup the Minutemen.

Eddie Blake, a.k.a. the superhero known as The Comedian, is one of Sally’s Minutemen comrades until he is mysteriously murdered at the beginning of the comic. This spurs a confrontation between the vigilante Rorschach, who’s trying to solve the murder, and Laurie and Doctor Manhattan. As Rorschach seeks out clues about Blake’s death, the story sheds light on Laurie’s relationship with her mother, Blake, and Rorschach himself:

Through this, the reader discovers a bombshell secret: Eddie Blake once tried to rape Laurie’s mother. There’s a flash of Rorschach’s staunch Objectivism in his reaction, as he’s willing to overlook a heinous crime like rape as long as it’s done by a “good” man serving the country.

We also learn that Laurie has a strained relationship with her mother. After Laurie and Doctor Manhattan’s enraged visit from Rorschach, Doctor Manhattan attends Blake’s funeral while Laurie goes to see her mother. Laurie’s conflicts with her mother usually revolve around the way she expects her mother to act, and here, their banter is prickly, with Laurie scolding and Sally brushing off each of the barbs with some caustic wit. At one point, they talk about Blake’s transgressions:

In this instance, Laurie gets mad at her mom for what she believes is forgiving Blake, something Laurie equates it with trying to forgive the Dachau concentration camp. Sally, we learn, blames herself for her feelings toward Blake even after the attempted sexual assault. (It bears mentioning here that Moore’s treatment of the attempted rape and his depiction of women in Watchmen, particularly Sally’s obsession with her looks and Laurie’s role as a girlfriend rather than a hero with agency, has been criticized as misogynistic.)

Later on in their visit, Laurie scolds her mother for holding on to a pornographic pulp novel about her alter ego, Silk Spectre:

The nerve stem of this resentment comes from Sally pushing her daughter into her footsteps of being a celebrity superhero. Sally saw superheroism as a business and loved the fame that came with it. She wanted the same experience for her daughter.

Morrison then describes Sally as an “overbearing showbiz mom who drove her daughter to excel while hiding from her the secret of her dubious parentage.”

Applying Morrison’s read and Moore’s disdain for superheroes to Laurie, and her character could stand in as a cynical meta-criticism of comic book companies: Because legacy heroes are so popular and so beloved, there’s an incentive for comic book companies to churn out secondary heroes that cash in on a name — long after the writers and artists who originated the character stopped writing them.

Perhaps the most fascinating part of Laurie’s story in Watchmen is that she finds out that she’s really Eddie Blake’s daughter, born from a consensual relationship between Blake and Sally:

This revelation, that two people as different as Laurie’s mother and Eddie Blake can come together, find love, and give birth to a well-adjusted woman convinces Doctor Manhattan that it’s worth trying to save the world. Manhattan believes that here must be many people like Blake and Laurie’s mom Sally, and that the miracle of their love is worth saving.

Unfortunately, because of a fake alien attack that Veidt stages to stop the world’s superpowers from starting WWIII, we don’t get to see Laurie herself fully deal with her parentage. Millions of people are killed in the process, and instead of coming to terms with her identity, Laurie has to resolve the more pressing moral dilemma of whether or not to participate in the coverup of Veidt’s plan to never let the world know that the attack that brought humanity together was all a hoax:

She, along with Nite Owl a.k.a. Dan Dreiberg and Doctor Manhattan, decides that revealing the plan would only cause more destruction and more loss of life. At the end of Watchmen, she is in a romantic relationship with Dan Dreiberg, and both have assumed fake identities. They pay a final visit to Sally, which gives Laurie some closure and a better understanding of what her mother went through. But instead of, say, moving to Connecticut and starting a family, Laurie and Dan decide to fight crime but under their own terms — terms that aren’t defined by the legacy of the people who came before them.

The first big change to Laurie in the HBO Watchmen series is that the character is now going by Laurie Blake. She’s taken on the name of her father, a man she thought of as human scum at the beginning of the graphic novel, but who later turned out to be her own dad.

She’s also followed in his footsteps, sort of. Like her dad, she’s now working with the FBI and has a role that seems to come with a lot of power — the closest someone can get to becoming a government-contracted superhero. As we see in the third episode, she takes down vigilantes while also delivering salty one-liners. And true to form, as seen in her last panel in Watchmen, she carries a gun now and, by the way, is an excellent shot.

In the book, the two have a rough-and-tumble relationship that’s exacerbated by Doctor Manhattan exiling himself to Mars because of the fear that he was making the people around him sick with cancer from the radiation he was emanating (this was all found out to be part of Veidt’s hoax). During that time, Laurie begins a relationship with Dan Dreiberg which lasts until the end of the series. We haven’t seen Dreiberg on the show yet, but he seems to be referenced as locked in jail during Laurie’s confrontation with Joe Keene.

“You know Laurie, a president can pardon anybody he wants,” Keene tells her. “He could even get your owl out of that cage.”

The gap between the end of the graphic novel, when Laurie left to fight crime with Dan, to now, where she’s working with the FBI, is unaccounted for. We don’t know what Dan did to land in jail apart from Keene’s jab at Laurie about the presidential pardon, nor how this affected Laurie to seek a possible penance from the FBI. (I have to be skeptical about her participation in the government — don’t think Laurie’s at the FBI just out of the goodness of her heart.) Agent Petey seems to know a little, but the viewer is left in the dark.

At the end of the episode, though, Laurie gives Watchmen viewers a delicious bit to chew on.

Throughout the episode, Laurie is sending a message to Doctor Manhattan via a Martian telephone call. She recounts a joke, or more of a parable, about God sending superheroes to hell. To Watchmen readers, it’s clear that this is based on a true story: The superheroes in question are stand-ins for Nite Owl, Doctor Manhattan, and the power-mad Adrian Veidt a.k.a. Ozymandias, with God sending each one to something akin to hell. God believes himself to be at the pearly gates all alone, Laurie says, until he realizes a woman is with them.

“I was standing behind those other guys the whole time, you just didn’t see me,” explains the woman. Laurie says that God never gave the woman any powers, any talents, and doesn’t even recognize her. He never even gave her enough attention to notice that she’s thrown a brick into the air.

“God looks up, but it’s too late. He never saw it coming,” she says.

Laurie Blake was not the most powerful, or the most visible, or the most impactful hero in Watchmen. Yet, in this adaptation, she reminds us that she’s the last one standing. We don’t know yet where she’s been or what exactly she’s up to. What we do know is that if you overlook her, you might end up just like God.