Watergate had tapes. Trump has tweets. 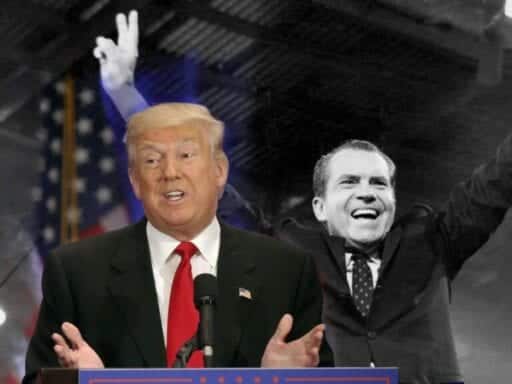 Nixon made his confessions in private. Trump makes his in public.

The Watergate tapes stand as one of the stunning, implausible twists of American history. Nixon confessed his crimes and recorded himself in the process. Who does that?

In their book The Final Days, Bob Woodward and Carl Bernstein write, “the single thread that linked the problems together was the President’s tapes. The lawyers represented a President who had bugged himself, who had blurted his secrets into hidden microphones. They had not yet heard the tapes, nor seen any transcripts of them. The President would not permit it. They were told to mount a defense, but were not given the information to do so.”

The Watergate scandal became about those tapes — the battle to make them public and expose Nixon’s private confessions. Without the tapes, a resignation would have been unlikely. This was a flimsy bit of providence, a ridiculous chance act upon which the integrity of our political system came to rest. But so it went.

The White House today has no internal taping system. But it has, perhaps, something serving the same purpose: Donald Trump himself.

Trump has a reputation as a liar, and he is one, when it serves him. But he also has a tendency to blurt out the truth in explosive moments of public honesty. “At times Trump acts publicly the way Nixon acted privately, as we know him from the [White House] tapes,” NYU professor and former Nixon Library director Tim Naftali told Vox.

The seminal instance of this came in Trump’s 2017 interview with NBC’s Lester Holt after firing FBI Director James Comey. The White House had crafted the story carefully, telling reporters the cause was low morale at the bureau and Comey’s handling of the Hillary Clinton investigation, and releasing a cautiously worded statement making clear that Trump was following the advice of staff.

Then Trump sat down with Holt. What he said next was the kind of thing that Nixon said on the tapes, only Trump said it openly, in public, with minimal prompting:

But regardless of [the] recommendation, I was going to fire Comey. Knowing there was no good time to do it! And in fact when I decided to just do it I said to myself, I said, “You know, this Russia thing with Trump and Russia is a made-up story, it’s an excuse by the Democrats for having lost an election that they should’ve won.”

It is unusual for a president to confess to obstructing justice during a televised interview, but that’s more or less what happened. If you dig through Nixon’s tapes, you will rarely find him being quite that explicit.

But that kind of thing happens a lot with Trump. He stands next to Vladimir Putin and says, aloud:

My people came to me, Dan Coats came to me and some others and said they think it’s Russia. I have President Putin. He just said it’s not Russia. I will say this. I don’t see any reason why it would be.

I mean, imagine if that came out on a secret recording.

Or take the Trump Tower meeting at which Don Jr., Jared Kushner, and Paul Manafort met with Russian operatives to get dirt on Clinton. Trump originally claimed the meeting was about adoption policy, not colluding with Russians to win the election. Now?

Fake News reporting, a complete fabrication, that I am concerned about the meeting my wonderful son, Donald, had in Trump Tower. This was a meeting to get information on an opponent, totally legal and done all the time in politics – and it went nowhere. I did not know about it!

Or, after receiving another update on the Russia investigation, Trump blasted this missive into the world, showing everyone how hard he was working to intimidate his own attorney general into protecting him from Robert Mueller’s investigation:

..This is a terrible situation and Attorney General Jeff Sessions should stop this Rigged Witch Hunt right now, before it continues to stain our country any further. Bob Mueller is totally conflicted, and his 17 Angry Democrats that are doing his dirty work are a disgrace to USA!

If all of this had come out in secret White House tapes, Trump would be seen much like Nixon — a president involved in a massive cover-up who uses his official powers to protect himself and his team from investigation.

That Trump keeps saying all this publicly somehow makes it seem less scandalous, but it’s really not. It’s just evidence that Trump is more self-righteous, and less self-disciplined, than Nixon, which aren’t comforting traits for the most powerful man in the world.

Targeted ads can be more than annoying — they can have mental health consequences
The case for prosecuting the Sacklers and other opioid executives
Meet the Democrat trying to unseat scandal-plagued Rep. Jim Jordan in his heavily Republican distric...
How to get the coronavirus unemployment benefits, explained
A foreign journalist’s warning about American authoritarianism
Judge rules that Manafort deliberately lied to Mueller’s team during cooperation