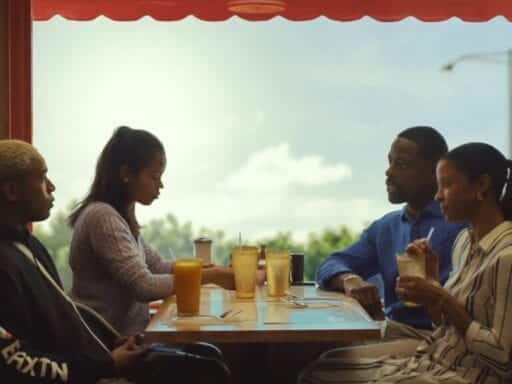 The director of It Comes at Night and Krisha returns with a bruising, beautiful story of hard-won grace.

When, near the end of Trey Edward Shults’s extraordinary drama Waves, a father quotes Proverbs 10:12 to his teenaged daughter — “Hatred stirs up strife, but love covers up all offenses” — it’s no glib pronouncement, no easy bow tied onto a story of a struggling family, no motto cross-stitched onto a morality tale. American cinema is rife with movies about family dysfunction and heartache, but because there can only be so much plot packed into a feature-length movie, too often those movies come off as slick or insincere.

But Waves earns its grace-filled ending by asking us to live alongside a trial by fire. It sounds like hyperbole, but I mean it: You walk out with a weary, cleansed soul.

Shults gained recognition for his two previous features, 2016’s Krisha and 2017’s horror film It Comes at Night. Both are about families discovering that the seeds of their destruction come from within themselves, and both garnered widespread acclaim from critics. With Waves, Shults continues that theme in a highly realistic setting, zeroing in on an ordinary American family with ordinary dreams and hopes, whose seemingly enviable harmony is beginning to go out of tune.

Which is the story of most every family, of course. It’s hardly unfamiliar. (By the time I saw Waves on the second day of the Toronto International Film Festival, I’d already seen three other movies about family dysfunction and redemption.) What sets Waves apart is its complex understanding of what it actually means for love to conquer fear and hatred. Loving one another is fitful work for broken people. And even though love can, indeed, cover up offenses, those offenses don’t disappear. They leave scars that love has to keep covering.

Waves is about a family in turmoil, and the only thing that can save them

At first, the movie centers on high school senior Tyler (played by Kelvin Harrison Jr., one of American cinema’s outstanding young actors; he starred in It Comes at Night as well as in this year’s indie breakout Luce). Tyler is a track and field star with a girlfriend he loves (Alexa Demie) and a bright future, pushed relentlessly to succeed by his caring, stern father Ronald (Sterling K. Brown). His younger sister Emily (Taylor Russell) lives in Tyler’s shadow.

Tyler and Emily’s mother died when they were young, and they’ve been raised by Ronald and their stepmother Catherine (Renée Elise Goldsberry). They look like a happy, healthy family — even to themselves. But when Tyler suffers a debilitating injury and a shocking revelation, his anger starts manifesting in self-destructive ways. And after a horrifying incident at a party, everything spirals out of control and the story pivots in an unexpected way.

What follows is at times almost unbearably, authentically heart-rending. Shults is an expressionist; he evokes in the audience both the swirling highs and grinding lows his characters are experiencing, from the exhilaration of being young and on top of the world to the brain-melting confusion of angry intoxication, to the shock of a life-altering accident. Sometimes the camera is pivoting around a point in a car or a gym; other times it’s moving jerkily, chasing the protagonist; other times it’s steady, with a calm that’s too deadly still. (In truth, I had to look away sometimes for a moment, the sensations were so intense.) The film’s score (composed by Trent Reznor and Atticus Ross) at times feels more like a soundscape, conflicting emotions swirling as though they’re stations on a rapidly changing radio dial.

These expressionist techniques set us up for some powerful punches, and they land hard in the gut. Just as stomach-churning are the moments when family members say things to one another that they know they can never take back, or that require extraordinary mercy to utter. Sometimes there’s hurt where love should be, but sometimes people are forgiven who don’t deserve it — and in the moment, that forgiveness feels radical.

Watching Waves, I found myself quite unexpectedly thinking of the many Christian movies I’ve seen in my time as a movie critic, first for Christian publications and then mainstream ones. The depiction of love, redemption, and forgiveness in Waves is precisely what so many of those films are going for, along with plenty of other nonreligious movies that resolve family conflicts with Hollywood endings. But in attempting to give solutions to life’s problems, movies like these do just the opposite of providing real redemption for their characters. Instead, they offer hollow promises and ignore how slowly and jaggedly broken lives mend. Waves, on the other hand, knows better.

Yet you hardly need to be religious to feel Waves work on you. The emotions it evokes are human emotions. We are built to be able to forgive. Grace is what we give to one another; love is how we make the world bearable for living. Early in the film, the whole family is sitting in church, where the pastor is preaching a sermon on 1 Corinthians 13, the passage that reminds us that love, real love, keeps no records of wrongs, always trusts, always perseveres. That hard, revolutionary truth is at the core of Waves — and it’s one worth living.

Waves opens in theaters on November 1.

Hurricane Florence: where the storm is and where it’s heading
Netflix’s Maniac, with Jonah Hill and Emma Stone, is either too weird or not weird enough
The Handmaid’s Tale ends a terrible story arc with an episode that’s kind of okay
The contradictory Republican case to Black voters — and why it matters
An Australian ecologist explains just how bad the fires are for wildlife
A new study on measles reveals a scary side effect: “immune-system amnesia”