Wayne Messam, who called on Americans to #BeGreat, suspends his presidential bid 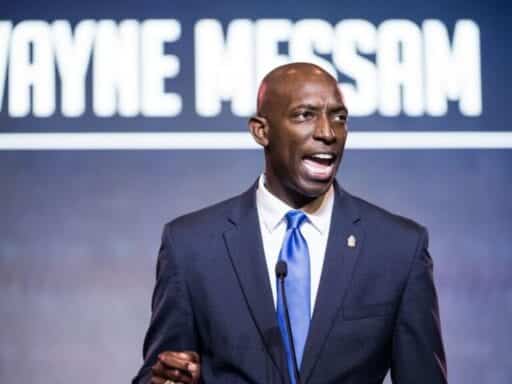 Citing poor polling and his difficulty breaking through with voters, Messam said he is suspending his campaign.

Wayne Messam, the mayor of Miramar, Florida and an early — but almost entirely overlooked — entrant into the 2020 Democratic presidential race, has suspended his White House bid.

“I knew the odds were a steep hill to climb but I have always fought for what is right and will continue to break barriers never broken,” Messam wrote in a Medium post announcing his plans to suspend his campaign — perhaps indefinitely — Wednesday.

“Although the campaign goal of becoming President was not realized at this moment, I could not be more thankful for the many supporters including my family, friends and so many Americans I have had the awesome opportunity to meet on the campaign trail all over this nation,” he added.

Messam pitched himself as an experienced progressive who was nevertheless a political outsider, telling voters, “I do not believe that the best ideas come from Washington.” He championed many causes near to the hearts of Democrats, from gun reform to erasing student debt to ending the filibuster.

But he never caught on with voters, and failed to cultivate the sort of attention his fellow small town Mayor Pete Buttigieg has received. Despite his best efforts, Messam did not qualify for any of the televised presidential debates, did not have any cable network town halls, and never received more than 1 percent support in national polls.

Throughout his struggles in the polls, Messam remained optimistic, focusing his campaign on early primary states and often sharing inspirational messages, reminding his social media followers to “#BeGreat.”

Wednesday Wisdom: It’s not the fears in our lives that break us but our failure to deal with them that do. So, face your fears America and #BeGreat Learn more: www.wayneforusa.com

That positivity was unfortunately not enough. A progressive who was not quite as far to the left as Sens. Elizabeth Warren and Bernie Sanders, Messam was overshadowed by rivals with greater name recognition who occupied a similar policy lane, former Secretary of Housing and Urban Development Julián Castro and Buttigieg.

Although he is no longer a candidate for president, he remains the top official in Miramar, Florida, and is still popular there — he was recently reelected by a wide margin.

Messam embraced most of the ideas championed by the Democratic primary’s progressives (although he did not support a version of Medicare-for-all that would do away with private insurance). He tried to stand out from his peers in three areas, however: gun control, student debt, and his emphasis on health and fitness.

The mayor is perhaps best known in his home state for collaborating with other local leaders in a lawsuit challenging a Florida law that penalized any official who tried to pass gun reform laws. That suit succeeded in July — a judge ruled the law unconstitutional. He hoped to bring this creative approach to gun reform to Washington, and said, “When I’m president, it will be the No. 1 priority for my administration to prevent mass shootings.”

Messam also had big ideas about tackling student debt — he outlined them in a long and very detailed white paper, but the crux of his plan was simple: like Elizabeth Warren, Messam proposed forgiving everyone’s student debt. Under his plan, federal loans would be forgiven and private loans would be paid by the federal government.

As a talented athlete who helped his college football team at Florida State University win a national championship as a star wide receiver, Messam made running a key part of his campaign: He can be seen dashing through sugar cane fields in his announcement video and would often post pictures of himself after runs with inspirational messages and captions about the importance of exercise.

Monday Motivation: There is a greatness burning inside of you. Embrace it with all of your being. Ignore anything or anyone who stands between your calling. #BeGreat https://t.co/voXkDKCcU7 pic.twitter.com/fP0pV6hgiL

Really enjoyed my 5AM run with one of my twin daughters. Health is your Wealth!! #BeGreat

He also encouraged voters to run with him, hosting “Run with Wayne” events on the campaign trail, during which he’d lead voters on five mile runs, then speak with them about his candidacy and platform as they all cooled down.

The #RunWithMayorWayne event in Columbia South Carolina on the Riverfront was hot and the natural beauty was picturesque. Thank you Columbia for the Southern hospitality! Join the team: Visit our page: https://mailchi.mp/wayneforusa.com/teamwayne2

Beyond these issues, Messam embraced other progressive platforms: he hoped to prioritize fighting climate change, expand access to health care, provide a pathway to citizenship for DACA recipients, and protect abortion rights. He also advocated for ending the filibuster, and called for getting rid of the electoral college.

What will Messam do next?

Messam is a young, progressive politician who is popular with voters in Miramar; he was reelected mayor in 2019 with an astounding 86 percent of the vote. Given he was just reelected, Messam pledged to “continue to serve as mayor of our great city” in his Medium post. He also dismissed “rumors concerning my next steps in service” as unfounded.

Mayors in Miramar are elected every four years — and he could run again for that position. Overall, however, his options for serving a greater number of constituents, seem limited.

Should Democrats retake the White House, having control of the Senate will be key to advancing any of the sweeping changes championed by the party’s presidential candidates, including those pushed by the Miramar mayor before he suspend his campaign. But no senators from Florida are up for reelection in 2020. Republican Sen. Marco Rubio and freshman Sen. Rick Scott (R) will face elections in 2022 and 2024, respectively, and Messam could challenge either, though that’s still several years off.

The mayor could also set his sights on the US House of Representatives. Miramar currently is represented by Democrat Rep. Alcee Hastings, but Messam could challenge the longtime congressman from the left, or could take a page out of 2020 presidential candidate Joe Sestak’s book and primary Hastings on ethical grounds, given the allegations the congressman faces of sexual harassment and the loss of his judgeship due to corruption.

Whatever he does, he’ll do it with confidence — unflinching in his commitment to be the next president of the United States despite the polls, Messam’s decision to continue with his longshot campaign despite the challenges he faced can perhaps best be summed up in one of his tweets: “Doubt is the inability to believe that you possess the ability to succeed. Confidence is the inability to believe you’d fail.”

A year of protest, as seen through street art
Is pulling US troops from Germany really a “gift to Russia?”
Thousands of child migrants may soon be held on US military bases
Mike Pence is officially part of the Trump impeachment investigation
Your Amazon package has a wild journey before it gets to your door
Why the era of Peak TV is the era of the disappointing second season