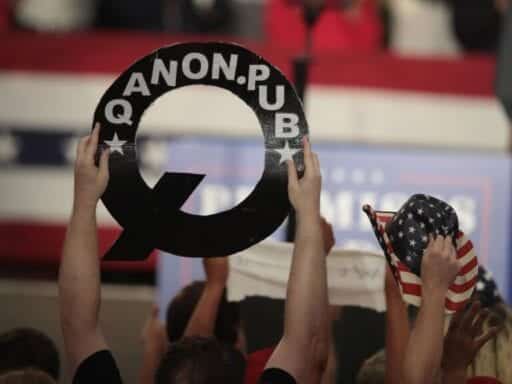 The QAnon subreddit, analyzed with data.

Late on a recent Thursday night, a Reddit user we’ll call “Goldie” posted a comment in the /r/FreeMagic subreddit about how the company that makes the card game Magic: The Gathering is hiring with diversity in mind — and how that was ruining the quality of its cards.

Then he went to /r/TheRedPill, a men’s rights community known for its misogyny. He posted a comment saying our society lets gay and transgender people and women get away with sexual harassment.

But Goldie’s next stop is what’s most interesting.

He went to /r/greatawakening, the community that drives the QAnon conspiracy theory. Enough of these people have shown up at Trump rallies wearing Q T-shirts that a reporter had to ask White House press secretary Sarah Sanders whether President Donald Trump supported QAnon. (She dodged the question.)

Goldie is deeply familiar with the culture of /r/greatawakening, because that’s where he’s been most active in recent months. And late that night, he went into a thread about the Clinton Foundation funding a pedophile ring and said he finds it “impossible to believe that this is all an elaborate hoax.”

It’s an outrageous claim, but it’s a core belief of QAnon conspiracy theorists. And it gets more outrageous: A key part of the QAnon narrative is that Donald Trump and Robert Mueller are working together to unearth a high-profile, Democrat-run pedophile ring.

But when we analyzed the participants of the /r/greatawakening — one of the main gathering places for QAnon supporters — we found that Goldie is a quintessential QAnon participant.

We were able to glean characteristics of this community by writing a computer program to analyze every single user who has commented on /r/greatawakening. From there, we looked at what other subreddits outside of /r/greatawakening these users participate in.

We found that most participants are relatively casual conspiracy theorists. Their interest in /r/greatawakening largely comes from their enthusiastic support for Trump. (There’s also a handful of Bernie Sanders supporters mixed in.) Their interests coalesce around things like video games, cryptocurrency, men’s rights, and martial arts. Although Reddit doesn’t ask for demographic data, it’s not a reach to say they are predominantly white men.

But here’s the kicker: An astoundingly small number of people produce the majority of the content. About 200 users account for a quarter of the forum’s comments. These people are clearly conspiracy theorists who believe they are investigators unearthing the truth, and they spend almost all their time on Reddit investigating these theories.

Another 700 users account for the next quarter of comments. Goldie is among these people. They are active in /r/greatawakening but also spend time on other subreddits.

Who or what is Q?

But let’s take a step back: Who or what is Q?

Q is the mysterious persona who set this conspiracy theory in motion — someone who claims to have “Q-level” security clearance, which is how he can drop all these hints about the “true nature” of what’s happening in Washington. (Most commenters used the pronoun “he,” so we’re using that here.)

It’s tempting to speculate on who Q actually is. Many think there’s no one Q and it’s instead a group of people. Others think it’s John F. Kennedy Jr. A BuzzFeed report argues that it’s actually leftist trolls. But it could also be just a teenage dungeon master who thinks this is his magnum opus. No one really knows (though my bet is that it’s someone who’s not all that interesting).

This community, however, has turned an internet conspiracy theory into a live-action role-playing game. They are the main characters — except they don’t think it’s a game; they believe this conspiracy is real.

Who are QAnon supporters, according to their Reddit activity?

There are many interesting nooks and crannies to this data set. For example, there’s overlap with men’s rights groups, gaming groups, cryptocurrency groups, and other conspiracy theory groups.

But there’s clearly a divide between hardcore QAnon users and everyone else.

Most people subscribed to /r/greatawakening don’t post anything. That’s in line with how most online communities work.

This conspiracy theory is compelling because of its participatory nature.

The QAnon conspiracy theory started when a 4chan poster — who said he had “Q-level” security clearance, and came to be known on 4chan and Reddit as “Q” — posted cryptic phrases and prompted people to investigate.

One of his first posts hinted that Hillary Clinton had been detained because Trump knew he had to remove “criminally rogue elements.” Q also told readers to follow former Clinton staffer Huma Abedin and to figure out why billionaire George Soros donated all his money recently.

Eventually, using Q’s hints, the community decided that the tumult of Donald Trump’s presidency was just a cover — that Trump, in fact, had everything under control. The users decided Trump was actually working with Mueller, instead of being investigated by him, to take down thousands of pedophiles. (My colleague Jane Coaston has a great explainer on this.)

But Q doesn’t say this outright. He only leaves “bread crumbs” for people to follow, and it’s the community’s job to piece them together. That’s why the subreddit’s users call themselves “bakers” — they’re pulling together the crumbs. Their investigation has led them to compare themselves to the Boston Globe reporters who reported on pedophile priests in the Catholic Church.

For most of these hardcore users, their Reddit activity circles around QAnon and other conspiracies.

They spend most of their time peddling conspiracy theories in politically oriented subreddits, including /r/politics. But they also spend time exploring other conspiracies in places like /r/MollieTibbetts, where redditors “investigate” the disappearance of 20-year-old University of Iowa student Mollie Tibbetts.

Still, most of their time is spent on /r/greatawakening.

The top 200 commenters rarely post to other subreddits. About 80 percent of their comments are on /r/greatawakening and another 10 percent on /r/the_donald.

One user has posted more than 650 comments about QAnon. The user often takes “Q drops” and reposts them on /r/greatawakening, reaping a great amount of “karma” (Reddit’s points) along the way.

Another top commenter makes elaborate diagrams that look almost like caricatures of a conspiracy theorist’s diagram, but the community eats it up:

In other words, for all the attention they’ve gotten, there are relatively few people who seriously participate in this game.

The user at the top of this piece, Goldie, is on the edge between a superuser and a casual user. But his Reddit activity falls more in line with the latter.

These casual users are what give QAnon its appearance of size and growth. They know the conspiracy theory, but they spend most of their time on other subreddits. QAnon is a side activity.

They scan as typical Trump supporters, with large overlaps in subreddit activity in /r/the_donald and /r/DrainTheSwamp. There is also a big overlap with /r/conspiracy and /r/TopMindsOfReddit (a subreddit that believes its members are a gathering of smart people who are boldly seeking out truth).

But on a per-account basis, only about one in 50 comments are on these conspiracy forums. (We only looked at users who posted between five and 30 comments in /r/greatawakening.)

In short, they aren’t a homogeneous group, other than their interest in Trump. They don’t all hang out in the same subreddits.

But there are some common themes in the subreddits they do hang out in:

When you look at this data, and dive into their comment histories, it’s hard not to think that many of these users profile as men who enjoy feeling like they know more than everyone else.

As one QAnon supporter told Vice, “It’s fun because we know before it’s going to happen a lot of times. Think of it: When things are happening, we got a smirk on our face — hehe — Q told us.”

The QAnon community is small, but it has powerful boosters who legitimize it

The core QAnon community is relatively small, and it would normally be a fringe conspiracy theory group that doesn’t get much attention outside the depths of internet forums. Even people like alt-right conspiracy theorist Jack Posobiec, who promoted the Pizzagate conspiracy theory, has pushed back against QAnon. (Posobiec said he would debunk QAnon.)

But it has been thrust into the national spotlight because some prominent figures feed into the frenzy. It has gotten attention from celebrities like Roseanne Barr and former MLB pitcher Curt Schilling. It has also gotten huge bursts of attention via top conspiracy theorists Alex Jones and Sean Hannity. (Media Matters has a good rundown of all the people who have promoted the QAnon conspiracy theory.) In addition, Q supporters have shown up in decent numbers at Trump rallies and garnered quite a bit of media attention.

At a recent Trump rally, the president appeared to point at a family wearing Q T-shirts during a rally. To be clear, Trump could’ve been motioning to any number of things. But the gesture seemed to affirm to the QAnon community that Trump was in on this. “Never thought I would have hope restored like it is now. Its almost surreal,” one user posted on /r/greatawakening.

After all, if the president supports what you believe in, then how can it not be real?

This is the math that made Katherine Johnson — one of NASA’s “Hidden Figures” — a legend
Senate Democrats want to delay Kavanaugh nomination after sexual assault accuser comes forward
Seattle’s newly police-free neighborhood, explained
21 kids sued the government over climate change. A federal court dismissed the case.
America is struggling to enforce its new mask mandates
Netflix’s Atlantics is a gorgeous, angry romance set in Senegal