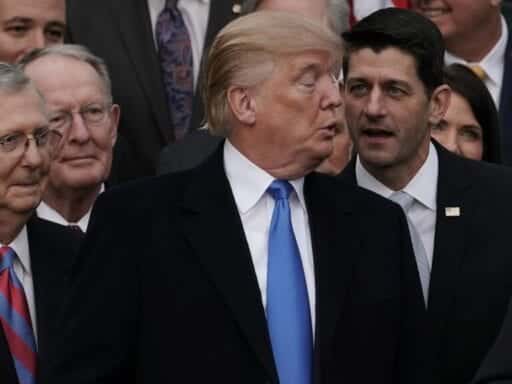 GOP senators have the power to get to the bottom of Michael Cohen’s allegations — but they don’t want to.

Senate Republicans will tell you that the news this week implicating President Donald Trump in a campaign finance felony is serious — and it looks like they intend to do absolutely nothing about it.

On Wednesday, Trump confessed to knowing about the payments in an interview excerpt from Fox & Friends, and confirmed that it was his money — not the campaign’s — which is what makes the payment a felony.

“Any criminal proceeding anywhere is unsettling and disturbing, you know that,” Sen. Richard Shelby (R-AL) told Vox. “But they’ve got an ongoing investigation. I’m sure they’re keeping up their thing.”

Pretending the Senate is powerless is ridiculous. Republicans, through the powers in various committees, could open an investigation into the president’s alleged involvement in Cohen’s campaign finance violations. Cohen’s lawyer Lanny Davis has said Cohen is willing to testify to a congressional committee under oath and without immunity.

Republicans appear to have no such plans.

“Well, I think there are plenty of investigations underway already,” Sen. John Thune (R-SD), the third-ranking Senate Republican, told Vox, adding that he would like more information on Cohen’s claim but dismissing the idea of having a congressional hearing or investigation — which is how Congress typically gets more information.

We asked eight Republican senators about Congress’s role in investigating Trump’s possible involvement in campaign finance law violations. Here are the transcripts of those conversations, lightly edited for length and clarity.

Do you think the allegations involving the president in campaign finance violations merit their own investigation in Congress?

No, because [Michael Cohen] has already [pleaded] guilty, and we will see.

But the president’s involvement —

Well, I don’t think they can indict a sitting president.

Senator, do you believe Michael Cohen when he says President Trump directed him to break campaign finance law?

I have no idea. Seldom do people plead guilty and then lie about it. But I don’t know. This is where [special counsel Robert] Mueller comes in. Rather than answer a bunch of hypotheticals, I’ll do what I did with Clinton. Ken Starr issued his report; I read it. I’ll make a decision.

My No. 1 goal right now is keep doing my day job, help the president when I can, and let Mueller do his job. He’s the one guy. I’m not asking you to trust my version of the facts. I am a Republican; I like the president. And I don’t want some partisan Democrat to be the judge or the jury. But I do believe Mr. Mueller will be fair; I don’t believe this is a witch hunt.

The Senate is investigating Russia’s involvement in the elections.

So why not investigate the campaign finance violation allegations that involve the president?

Why not right now?

I have not seen Sen. [Chuck] Grassley or any Democrats suggest that. You need to ask Sen. Grassley that.

Senate Majority Whip John Cornyn (R-TX): “When you get people who will lie to banks and to everybody else, then I don’t think additional campaign finance legislation is needed”

The president was implicated in a crime yesterday. Should Republicans in the Senate do anything?

Well, there was an allegation made and we need to get to the bottom of the allegation, but I would note that the individual making that charge — his credibility is in tatters, he’s been all over the map in terms of what his story is. So that’s going to have to be judged through the court system, and I think that’s where it should be judged.

Senator, does Congress have a purview to do any sort of investigation in this matter?

We’ve been investigating the reason for which the special counsel was appointed, which is to look into Russian activities during the election for the last year and a half. And we’ve issued a number of interim reports in the Senate Intelligence Committee, and so we’ll continue that work. But nothing we heard yesterday has anything to do with Russia or the reason Director Mueller was appointed special counsel.

So you don’t think Congress should investigate the campaign finance violation?

Should the Senate take up campaign finance legislation to tighten the rules?

I don’t think it’s necessary. When you get people who will lie to banks and to everybody else, then I don’t think additional campaign finance legislation is needed.

Sen. John Thune (R-SD), third-ranking Senate Republican: “I think everybody is in a wait-and-see mode”

Do you think Congress should investigate Cohen’s claim that Trump directed him to break campaign finance laws?

Well I don’t think — well, obviously we are going to find out more about that. We don’t know exactly what happened there, and I think we will. And sounds like he is going to talk to Mueller, so I assume at some point, it will come out.

So getting to know more — is that something that Congress should pursue itself?

Well, I think there are plenty of investigations underway already. Obviously, members of Congress are going to be interested in knowing the facts — and until we get all the facts out ,there it is going to be hard to draw any hard-and-fast conclusions.

Michael Cohen’s attorney says that Congress should investigate and that Cohen is willing to come and testify in a public hearing.

His attorney is making a lot of claims and kind of using the airwaves to litigate this at the moment, but I think that if that were to happen, the decision would ultimately [be something] that the Intelligence Committee, I suspect, or somebody with that jurisdiction would have to make.

But at the moment, I think our basic view is that there are lots of basic investigations under way and some of this stuff is getting concluded, obviously there have been some indictments and convictions, but I think until we know more, I think everybody is in a wait-and-see mode.

Sen. Ron Johnson (R-WI): “This will play out in the courts”

Do you think Congress should investigate Michael Cohen’s claim that the president may have been involved in directing him for campaign finance violations?

This will play out in the courts.

Congress is investigating the Russia …

When we have these active investigations we can’t get the information anyway. That’s why I’ve said we have this whole investigation thing backward. Let Congress complete its investigation, have access to all the material, issue the reports. If referrals were necessary to the Justice Department, then let it run its course this way. When you start out with the special counsel, then we just can’t get the information out, and the public has the right to know these things.

Right now, it’s in the courts. That’s where it will reside.

So this being separate from the special counsel, then why not investigate it in Congress?

I wanted to ask, the Russia investigation aside, whether Congress should investigate Cohen’s claim that Trump was a co-conspirator in campaign finance violations.

You know, the Intelligence Committee understands Sen. [Richard] Burr [R-NC] has been our lead [person]; you probably need to ask him that question.

But do you think Congress [should investigate] the campaign finance violations and Trump’s potential involvement?

Well, it’s important now. Obviously it’s more than in courts. I think we’ve had some pleas, right? When things are in court, court seems to be crystallizing things. Whereas Congress doesn’t have all the power of a grand jury, they don’t have the sweeping power of investigating, expertise, and attorneys that the Justice Department has. I hadn’t thought about Congress should get involved in that.

But they’ve got an ongoing investigation. I’m sure they’re keeping up their thing. I’d talk to Sen. [Mark] Warner [D-VA] and Sen. Burr together. They see you, they’ll talk to you.

Is there a sense that this is a very serious allegation separate from the Russia investigation?

All I know is what I read and see. I’ve been focused on my job here. It’s, ah — any criminal proceeding anywhere is unsettling and disturbing, you know that. So let’s see what happens.

Sen. Bob Corker (R-TN): “I have never seen anything like I have seen in the last year and a half”

Do you think Congress should investigate the president’s possible involvement in campaign finance violations?

Um. I don’t know. Let me have a few meetings and discussions and get back to you.

What was your initial reaction?

I have never seen anything like I have seen in the last year and a half. I have been here 11 and a half years. I wasn’t surprised.

Sen. Orrin Hatch (R-UT): “If there are campaign violations, then of course I’d look at it”

Do you think Congress should investigate Michael Cohen’s claim that the president directed campaign finance violations?

Well, I don’t know about that. I’d have to look at that. If there are campaign violations, then of course I’d look at it.

So you do think that Congress should investigate it separate from the Russia investigation.

Well, I’d have to look at it. I don’t know enough about it.

I wanted to ask if you think there’s a role for the Senate to investigate Michael Cohen’s claim that the president was a co-conspirator on campaign finance violations.

Look, the process is playing out, I’m going to be engaged on this on the judiciary side, but there’s a lot of investigations going on right now. I’ll get back to you on whether I think that’s a good idea, but my initial reaction is the Senate is pretty engaged right now on these issues, with Mueller.

The Russia investigation aside, though — just the campaign finance violations — do you think that’s serious enough to merit its own investigation?

I don’t know. I haven’t thought about that.

If the allegations are true … should the president resign?

Look, last night I was focused on Alaska’s elections, so I’ll get back to you with all your great questions on the breaking news right now, which you guys are really good at doing.

I mean, from the headlines, do you find it serious?

Yes, it’s serious. But I’m not going to answer every hypothetical posed by the media right now. Including that one.

Trump faces a new allegation of sexually assaulting a woman at Mar-a-Lago
Stay home with Curbed: A guide to loving the space you have
Amazon has been frustrating during the pandemic, but Prime is more popular than ever
Protestors compare travel ban to dark US periods
Brexit is finally happening. On January 31. For real this time.
Nancy Pelosi’s outfit at the House impeachment debate sent a subtle message