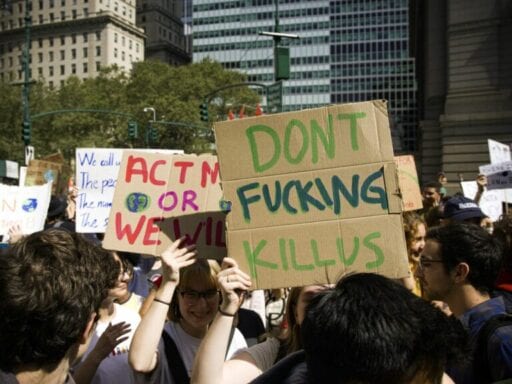 “I need to be here to make a change”: New York’s climate strikers in their own words.

As estimated 4 million young people and adults around the world on Friday joined the Global Climate Strike in an astonishing show of force to demand faster climate action from governments and corporations. Organizers say it is the largest climate mobilization in world history.

The strike was principally led by youth, including the Swedish teen Greta Thunberg, the American group Zero Hour, and hundreds of other youth groups focused on climate change around the world.

The largest climate strike in the US happened in New York City. Strikers gathered in Foley Park and marched down Broadway past city hall, and then Nassau Street, around the Wall Street bull, before rallying in Battery Park. Activists estimated more than 300,000 people joined the New York City rally, and city officials soon had to turn marchers away from the park.

The mood was jubilant, with marchers climbing scaffolding and signing songs. They chanted, “The seas are rising and so are we.”

But when pressed, many of the school strikers, from elementary schoolers to graduate students, sounded alarmed and anguished. The jokes and memes on their signs served as a veneer over a deep anxiety about the world they stand to inherit. Here are eight of the young people I met explaining why they joined the strike.

”I do not like climate change even though I like summer. It is too hot for me. I think we should throw away our cars and start walking and exercising more.”

“I’m here today because the Amazon’s on fire, the glaciers are melting … what else, how many other reasons do you need?” said Mojica, a masters student at Seton Hall University for diplomacy and international relations.

“I’ve never attended an environmental protest before. I’ve been waiting for a large climate protest to come to New York City.

“I believe that Congress is not doing enough for this country in terms of environmental policies, in terms of a lot of other things, too. I’d like for the next presidency, whoever we have next, to undo the damage that was done by Trump, all the work that he undid from Obama’s term.”

“The Earth is very important to me and because climate change is really bad. The earth is getting hotter and hotter.

“I came to see Greta speak, to see all the other signs and help Earth. I hope that the government starts taking more care of the earth.”

“Our school did a march in front of Grand Army Plaza, in front of the museum. So then we really wanted to come to this march.”

“We came here because climate change is a very important issue, so I couldn’t skip it. We’re making it worse, so it’s important to stop it.”

“[I came here] to help get people who are not believing in this issue, for example Trump, to start believing and to start doing something about this because they have the most control and power in this country.

“I would obviously like to see all this whole issue being solved, that climate change isn’t happening anymore. I’m definitely going to continue doing all these marches and trying to convince my friends and come and do these because I really care about this issue.”

“What brought me here is that I really support [fighting] climate change and I felt like a really good way to show support is to grab [people’s] attention with something about the [Area 51] raid. I really want to help the planet.

“I watched many news and videos about how climate change is impacting our lives. Countries like Bangladesh are flooding. there’s fires in California. Deserts are spreading.

“Climate change affects, not one group of people, but everyone. It doesn’t matter your race, age, it affects everyone. This planet is ours and we are all part of this planet.

“I would want people to decrease the emissions of carbon dioxide and decrease deforestation, such as in the Amazon, Indonesia, and Southeast Asia.”

“I’ve been taking a lot of classes since my freshman year of high school that have to do with environmental justice, that has to do with how climate change is affecting our world. Also, I’m from one of the countries that’s being affected the most, I’m from Bangladesh.”

“I realized I need to be here to make a change. I have a calc test so I could’ve gone to tutoring, but I’m like, ‘No, I’ve got to come here to make the change.’

“I feel really depressed that it’s such a big problem but still our politicians don’t care about it. Our president thinks it’s a joke.

“I feel uplifted that people actually came here today. Not just one or two, but millions around the world.”

A North Carolina court just threw out Republicans’ gerrymandered state legislature map
Why Vienna opera singers are ready to risk their lives to perform in a pandemic
12 Monkeys, one of TV’s weirdest shows, ends with a delightfully meta series finale
Fauci’s Senate testimony debunked a number of Trump’s favorite coronavirus lies
On Buddhism and Blackness
Scott Pruitt gave “super polluting” trucks a gift on his last day at the EPA