“We can’t let things settle down”: George Floyd and Eric Garner’s families call for racial justice at the DNC 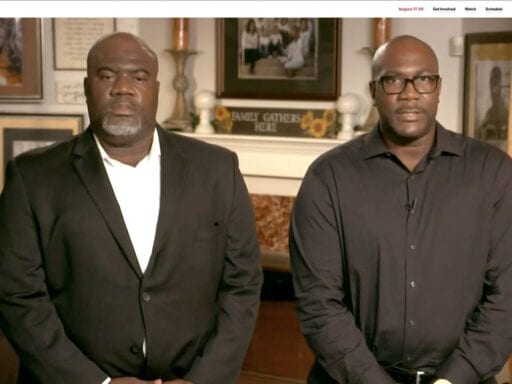 Share
Loading...
Rodney Floyd (L) and Philonise Floyd (R), brothers of George Floyd, speak on the first night of the Democratic National Convention on August 17, 2020. The convention is taking place virtually due to the coronavirus pandemic. | DNCC via Getty Images

Floyd’s brother and Garner’s mother called America to action on the first night of the 2020 Democratic National Convention.

The 2020 Democratic National Convention is giving politicians a platform to share their vision for the future of the country, but it’s also making room for speakers who, perhaps, belong to an even more important group: the electorate, particularly family members of people who have been slain by police.

The virtual convention kicked off Monday evening with a lineup of speakers featuring Democratic Party stars such as Sen. Bernie Sanders and former first lady Michelle Obama, as well as lifelong Republicans like former Ohio Gov. John Kasich. All of these speakers gave dire warnings about what four more years of President Donald Trump would mean. Yet it was the presence of the families — the people who have experienced some of the deepest pain imaginable — that brought the Democrats’ point home: It’s time for change.

Gwenn Carr, the mother of Eric Garner — who was killed after an officer put him in a chokehold in Staten Island, New York in 2015 — also made an appearance. Since Garner’s death, Carr has sought justice to her son’s case and has become an advocate for many other victims of police brutality. On Monday evening, she spoke with Joe Biden directly and made the case for systemic reform: “I’m just asking that if you become the president, that you make sure that we get national law as well as state and local law, especially when it comes to police brutality because that has been an age-old problem.”

The Democratic Party’s decision to put these families front and center is a reminder of politics’ role in the national reckoning over race — and that although Biden has taken a more moderate stance on police reforms, as president, he would continue to face pressure from activists and protesters for sweeping change. And the messages of each family member made explicit something the ongoing protests have worked to highlight: There’s so much more work to be done.

Four years later, a mother and brother delivered the same message. Going forward, activists are calling on Democrats to ensure these families aren’t just props during one of America’s biggest political events, but citizens whom they’re willing to listen to, learn from, and find ways to make policy changes for.

There have been some signs Democrats are willing to advocate for policy changes. Cities across the country have passed police reform legislation and the House of Representatives passed the George Floyd Justice in Policing Act that would curb qualified immunity, bolstering victims’ ability to hold police responsible for transgressions like excessive use of force. The bill would also impose a federal chokehold ban and bar no-knock warrants in drug cases at the federal level, the type of warrant that led to officers killing Breonna Taylor in her own home. It has not been taken up by the Republican controlled Senate, however.

Monday, both family members advocated for this approach, asking — particularly in the Carr’s case — that Democrats to go beyond symbolic gestures.

How far beyond those gestures the party should go, and what advocacy for police brutality victims should look like has been debated by activists, and party officials. Some feel the House bill is a sufficient first step, while others demand more systemic changes, like the reallocation of policing budgets to other services, known as “defunding the police.”

An example of this debate has emerged around DC Mayor Muriel Bowser, who introduced Floyd during the convention. Bowser gained global attention for painting the words “Black Lives Matter” on an intersection near the White House, which she named “Black Lives Matter Plaza.”

Bowser appeared with the painted words as her backdrop Monday evening, but was met with criticism from DC residents who said she, because of her opposition to defunding the police, was not living up to the meaning behind “Black Lives Matter.” Biden, who is poised to accept the party’s nomination later this week, has also said he does not support defunding the police.

Both Carr and Floyd were very clear about what they want to happen next. For Floyd, it’s seeing people stand up for the people whose deaths didn’t go viral: “When this moment ends, let’s make sure we never stop saying their names,” he said.

And Carr said she wants to see Democrats held accountable, even once police brutality and systemic racism are no longer hot topics.

“I know when my son was murdered there was a big uprising,” she said. “But, then it settled down. We can’t let things settle down. We have to go to the politicians, and we have to hold their feet to the fire.”

How to actually make a difference if you’re nervous about the election
Polls: Senate races in Alaska and South Carolina are surprisingly competitive for Democrats
Colorado is fighting its largest wildfire in history
Putting a dollar value on one of oil’s biggest subsidies: military protection
The other infectious diseases spreading in the shadow of the pandemic
Kristen Welker is moderating the final presidential debate. Trump is already attacking her.