We caught a cosmic ray, one of science’s biggest mysteries 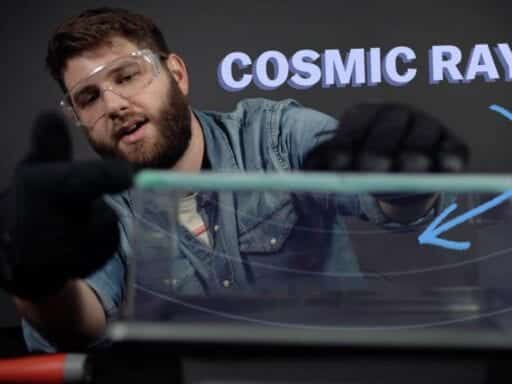 Cosmic rays are hitting us all the time. What are they?

The greatest mysteries of the universe don’t have to reside in black holes or far off galaxies. Some of them actually surround us all the time — and even sail right through our bodies.

One such mystery is cosmic rays, radiation from space made of tiny bits of atoms. They’re not harmful to humans, but they perplex physicists, who are trying to figure out where the very most powerful cosmic rays come from.

Many are much too powerful to have originated from our sun or an exploding star. And because they don’t often travel in a straight line, it’s hard to pinpoint their true origin.

The answer to the mystery of cosmic rays could involve objects and physical phenomena in the universe that no one has ever seen or recorded before. And physicists have several enormous experiments around the world underway now devoted to cracking the case.

Watch the video above to learn more about cosmic rays. You can find this video and all of Vox’s videos on YouTube. And if you’re interested in supporting our video journalism, you can become a member of the Vox Video Lab on YouTube.

Why did Trump let the Ukraine aid through?
Boris Johnson’s top adviser took a lockdown road trip. Now it’s a huge scandal.
The Supreme Court’s surprising decision on churches and the pandemic, explained
3 things you need to know about the coronavirus today
Glossier, the most-hyped makeup company on the planet, explained
This social network for churches is thriving in the coronavirus pandemic