“We got what we wanted”: Democrats defend the decision not to call impeachment witnesses 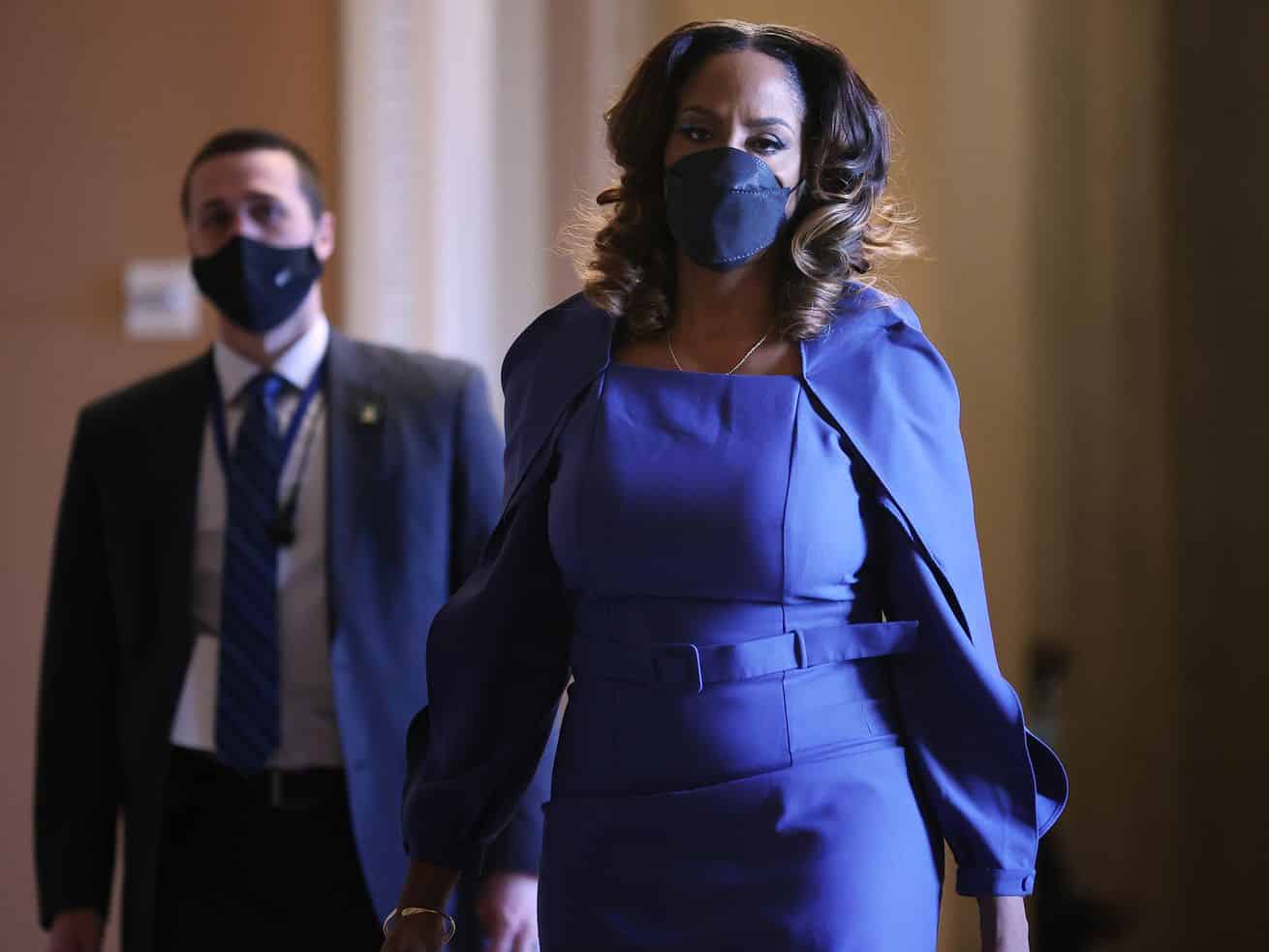 One day after the acquittal of former President Donald Trump, multiple House impeachment managers worked to explain their decision not to call witnesses in his second impeachment trial.

Witnesses initially were not expected to be called during the trial, but that expectation was upended Saturday morning when lead House impeachment manager Rep. Jamie Raskin (D-MD) called for Rep. Jaime Herrera Beutler (R-WA) to be deposed.

On Friday, Herrera Beutler released a statement that confirmed details from her previous account of Trump’s conduct during the storming of the US Capitol on January 6, and that suggested the former president was not alarmed about the insurrection. Raskin argued for hearing more from Herrera Beutler, and the Senate voted to draft rules on calling witnesses. But amid opposition from Republicans — and reportedly, some Democrats — impeachment managers ultimately settled for having Herrera Beutler’s statement read into the record and calling no witnesses.

The move was widely criticized as an “an unbelievable cave by Democrats,” ” a “retreat,” and “a non-serious move.” Sunday, however, Democrats argued that they didn’t back down.

“I think what we did was we got what we wanted,” US Virgin Islands Del. Stacey Plaskett told CNN’s Jake Tapper on Sunday. “Which was [Herrera Beutler’s] statement, which was what she said, and had it put into the record. And being able to say it on the record, out loud, so others would hear.”

“We didn’t back down,” says House impeachment manager Stacey Plaskett on their decision to forego witnesses.

“We had sufficient evidence to prove that the President did what we said he did, which was incite an insurrection to overthrow our government.” #CNNSOTU pic.twitter.com/6XoxBV4Mi0

According to Herrera Beutler, who was also one of just 10 House Republicans to vote to impeach Trump for a second time last month, Trump spoke to House Minority Leader Kevin McCarthy (R-CA) on January 6 as the Capitol building was under attack by a pro-Trump mob.

“Well, Kevin, I guess these people are more upset about the election than you are,” Trump reportedly told McCarthy as rioters stormed the Capitol.

Herrera Beutler had previously recounted that conversation to a local news outlet, the Longview Daily News, in January after her impeachment vote, but it garnered new attention when CNN reported additional details Friday.

“You have to look at what [Trump] did during the insurrection to confirm where his mind was at,” Herrera Beutler told CNN Friday. “That line right there demonstrates to me that either he didn’t care, which is impeachable, because you cannot allow an attack on your soil, or he wanted it to happen and was OK with it, which makes me so angry.”

As compelling as Herrera Beutler’s testimony might have been, though — she called Trump’s comments “chilling” — Democrats argued Sunday that it wouldn’t have made any difference to the outcome of the trial, and it wouldn’t have been worth the delay to other Senate business.

“We could have had a thousand witnesses, but that could not have overcome the kinds of silly arguments that people like McConnell and Capito were hanging their hats on,” Raskin told NBC’s Chuck Todd Sunday on Meet the Press.

EXCLUSIVE: @RepRaskin explains why Democrats chose not to hear from witnesses.

Raskin: “We could have had a thousand witnesses but that could not have overcome the kinds of silly arguments that people like McConnell and Caputo were hanging their hats on.” pic.twitter.com/tkStrGVxUV

Rep. Joe Neguse (D-CO), one of the impeachment managers, also told Margaret Brennan on CBS’s Face the Nation Sunday that “witnesses that were not friendly to the prosecution were not going to comply voluntarily, which meant that we were going to be litigating subpoenas for months and potentially years.”

As both Neguse and Plaskett pointed out, Democrats are still engaged in a court battle to compel former White House counsel Don McGahn’s testimony related to Trump’s first impeachment trial.

This all raises the question of why Raskin proposed deposing Herrera Beutler if getting her testimony might have been difficult and if it was seen as having little influence on the outcome.

For one, Herrera Beutler was reportedly prepared to testify if subpoenaed. Other potential candidates for a deposition — such as McCarthy himself, or Alabama Sen. Tommy Tuberville, who spoke to Trump on the phone during the insurrection — may have been less willing, but Neguse said Sunday that managers wanted to hear from just “one witness, not multiple witnesses.”

Why a deposition seen as futile was proposed appears more complicated.

Pressure from Democratic Senate colleagues may have played a role in the House managers’ decision Saturday. According to a Politico report, Delaware Sen. Chris Coons cautioned his House colleagues that pursuing witness testimony would “cost them Republican votes to convict and maybe even some Democrats.”

“The jury is ready to vote,” Coons reportedly said. “People want to get home for Valentine‘s Day.”

The managers also claimed Sunday that they were satisfied with having Herrera Beutler’s words read into the record, because any deposition taken would have been similar to what the Washington representative had already said in previous statements.

“It became very clear to us the president’s counsel was willing to stipulate to allow that statement to come into evidence and be considered by the Senate,” Neguse said on CBS. “And that was an important stipulation.”

As Vox’s Andrew Prokop pointed out Saturday, there was little suspense about whether testimony could affect the final vote in the Senate. This made the argument for calling witnesses more about attempting to shed further light on Trump’s state of mind — and chipping away at his support — than anything else.

The outcome of the trial wasn’t in serious question, since Democrats never got anywhere near the 17 Republican Senate votes they’d need to convict Trump. (For instance, Senate Minority Leader Mitch McConnell announced he would vote to acquit Trump Saturday morning, ending rumors to the contrary.)

This means the witness question would mainly be about attempting to further unearth facts about what happened, or aimed at hurting Trump’s political support (rather than having a real chance of convicting him). But in the end, political leaders in both parties preferred the trial to end now, rather than dragging it out. Democrats hope to return to a focus on President Biden’s agenda, and Republicans want the focus off Trump’s ugly actions.

As Neguse said Sunday: “I think it’s pretty clear, and lead manager Raskin touched on this, whether it was five more witnesses or 5,000 witnesses … it would not have made a difference to those senators.”

All told, 57 senators — 10 shy of the two-thirds majority needed to convict Trump — voted to find him guilty Saturday. Seven Republicans joined every Democrat in voting to convict Trump of inciting insurrection. Despite that verdict, which was widely, and accurately, seen as predetermined along largely partisan lines, House impeachment managers argued Sunday that their evidence, including Herrera Beutler’s statement, speaks for itself.

“We had sufficient evidence to prove that the president did what we said he did, which was incite an insurrection to overthrow our government,” Plaskett said Sunday. “I think that all Americans, when we rested our case, believed that we had proved our case.”