We put a “sin tax” on cigarettes and alcohol. Why not meat? 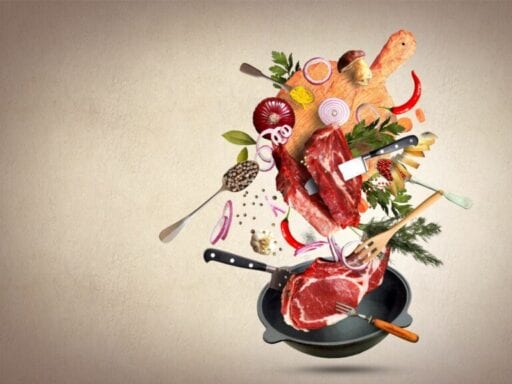 Our love of meat is taxing the climate. Maybe we should tax meat.

Here’s one way to discourage people from indulging in a damaging habit: tax the hell out of it. Cigarettes and alcohol are already taxed. In some cities, soda is too. Is it time to embrace a meat tax?

Some politicians in Germany think so. The value-added tax (VAT) for meat is currently 7 percent, just like for most other foods in the country. But on August 7, lawmakers from across the political spectrum proposed raising the tax on meat to 19 percent. They say that’ll decrease the nation’s consumption of meat, a win for animal welfare and for the environment.

What’s more, the extra money gathered from the meat tax could then be invested into one of those causes. “I am in favor of abolishing the VAT reduction for meat and earmarking it for more animal welfare,” said Friedrich Ostendorf, the agricultural policy spokesperson for the Greens. (Meat has long been subject to a reduced VAT — the idea now is to scrap that reduction.)

Germany isn’t the only country exploring the idea of a meat tax. Denmark and Sweden have also been considering it.

If it gains traction, it could help rid the world of a lot of unnecessary suffering. Every year, billions of animals are raised on factory farms, often under such cruel conditions that there are laws to keep the mistreatment hidden from public view.

Plus, raising livestock is one of the most environmentally harmful activities out there, because it uses up so much food, water, land, and energy, and because cattle produce so much methane. As a major United Nations report highlighted this week, fighting climate change requires us to make sweeping changes to how we use land and grow food (shifting to a more plant-based diet will help). It’s worth noting that a meat-heavy diet also comes with health risks, from heart disease to obesity to antibiotic resistance.

In other words, meat consumption has hidden costs: When we indulge in it on a large scale, we do damage to the climate and to our health that our societies have to pay for down the line. When we tax harmful products like this, it’s called a “sin tax.”

To make a really substantial impact, global proponents of a meat tax will want to target the United States, which — together with Australia — tops the charts for most meat consumption per capita per year. Some US activists (at PETA, for example) are campaigning for the tax. And a 2017 report from Farm Animal Investment Risk and Return, a network that guides investors’ decision-making, noted that a meat tax is becoming “increasingly probable.”

But it’s hard to imagine a meat tax getting off the ground anytime soon in this country, where meat has become entwined with national identity, and where the average citizen consumes more than 200 pounds of meat a year. Let’s break down the arguments people are likely to make against this tax.

Many in the US vehemently oppose taxes on soda, even though the sugary drinks don’t have the all-American emotional valence that a barbecue does. They say the soda tax infringes on personal liberty — and they might make the same argument about a meat tax.

Yet as James Hamblin has pointed out at the Atlantic, you can also use that argument to make the case for a meat tax. “The person who eats 400 pounds of animal meat every year is treading on the environment for others, and so a meat tax could be implemented as a matter of protecting personal liberty,” he wrote. “Eating that way wouldn’t be illegal, but people who choose to do it would have to pay for the imposition of their choices on others.”

Another concern is that taxing meat would hurt livestock farmers economically. There are ways to address that, though. Governments could use the extra money from the tax increase to compensate farmers for income losses or otherwise help them adjust to the new reality. In fact, that’s what Albert Stegemann, an agriculture spokesperson from Chancellor Angela Merkel’s Christian Democrats party, has proposed: “The additional tax revenue should be used to support livestock farmers to help them restructure.”

An arguably more serious ethical worry is that a meat tax could have a negative health impact on low-income communities by depriving them of a source of much-needed calories. They often don’t have fully stocked grocery stores or farmers’ markets where they can buy nutritious plant-based foods or high-quality produce, and even when those items are available, they can be more expensive. For someone living in a food desert, buying a burger at a fast-food restaurant may be the cheapest way to get a high-calorie meal.

Some researchers are already trying to figure out how to design good policy that accounts for that. A 2017 report published in Nature Climate Change, for example, laid out a strategy that involves using a portion of tax revenues for health promotion. And a new National Bureau of Economic Research working paper explores the process of calculating an “optimal sin tax” — one that avoids disproportionately harming low-income consumers.

Taxing meat is definitely not an uncontroversial policy option or a silver bullet. But as our climate crisis grows more urgent and animal welfare becomes a more pressing public issue, it’s an idea well worth considering.

What’s next after the Trump-Kim summit? An expert explains.
The best $2,000 I ever spent: many, many rounds of bingo
House Republicans’ top-ranking woman is facing the toughest reelection of her career
Trump’s radical lawsuit against Nevada’s vote-by-mail law, explained
Can anything change Americans’ minds about Donald Trump?
How Cuties, a French Netflix movie, became part of America’s culture war