Welcome to the world of craft weed 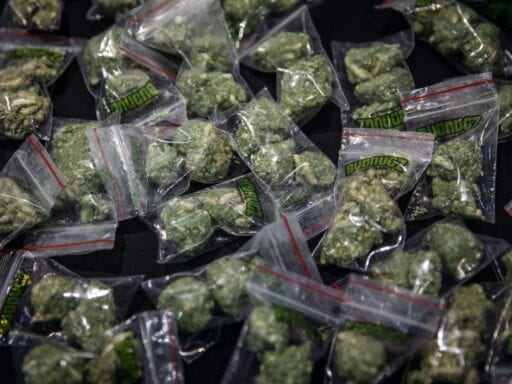 Share
Loading...
Cannabis-shaped chocolate cookies are seen at the Cannabis Expo, the largest trade and consumer exhibition on the African continent focusing on the cannabis industry and business, at the Sandton convention center, in Sandton, South Africa, on November 29, 2019. | Michele Spatari via Getty Images

Big Marijuana is coming. What does that mean for the future of weed in America?

Not so long ago, beer drinkers didn’t have a lot of options. If you wanted beer, you had to choose between Budweiser or Miller Light or a handful of other cheap options. But in the 1960s and ’70s, there was a renaissance in the industry. As regional breweries merged and closed, the craft beer movement was gradually born. Today, we’re living in a golden age for beer drinkers, with amazing beer from around the world available almost anywhere.

That is the path the legal weed industry might well follow — if things break right. That’s the argument that Ryan Stoa, a law professor at Concordia University, makes in his new book Craft Weed.

The best-case scenario is a weed industry modeled on the beer or wine industry. In that world, we’d have the weed equivalent of Anheuser-Busch or Marlboro but also a whole host of small farmers growing and selling high-quality craft weed. And this would not only be great for consumers, it would also be an economic boon for rural communities across the country.

I spoke to Stoa by phone about how close we are to that vision, whether we can avoid marijuana monopolies, and why a dynamic weed industry will benefit the communities most harmed by the disastrous drug war.

What is craft weed?

Craft weed is artisanally produced, smaller-scale cannabis that is grown on family farms. That is in contrast to the rise of what I describe as Big Marijuana, which is large-scale cultivation of cannabis typically in massive outdoor fields or in large warehouses.

Is Big Marijuana the future of legal weed in America?

I wrote the book in part because the conventional take is that the Big Marijuana takeover is inevitable. Just like any other economy of scale situation, eventually the industry would consolidate and you’d have these 10,000-acre farms growing generic and low-quality cannabis.

But this view ran against what I was seeing on the ground, especially in places like Northern California. So I wanted to lay out the case that the Big Marijuana future is not necessarily inevitable, and even if Big Marijuana does come to pass, we can have a craft weed model that can exist alongside it.

I want to talk about what that model might look like, but first I’ll ask if you think people should be worried about the emergence of marijuana monopolies?

I think there should be a healthy dose of concern about the possibility that a few very large companies will take over the market. And I’ll give you a few reasons why. Number one is the general principle of scaled-up agricultural economics. If you’re producing mass quantities of something, typically the quality goes down. And that’s true with most crops. It’s definitely true with cannabis, which is a high-maintenance plant that requires a lot of attention in order to grow high-quality buds.

It usually means that we’re going to get more pesticides and fertilizers on the crop, which I know is a concern for a lot of cannabis consumers. But perhaps most importantly, it’s likely to mean that there won’t be as much choice for consumers or market options. One of the amazing things about the cannabis industry right now is that there are thousands of different strains of marijuana.

So the potential for market choice or options for the consumer is nearly endless in a craft weed model.

When people hear the phrase “craft weed,” they think of “craft beer” and the beer industry. And we’re in a kind of golden age of beer. If you like shitty beer, you can buy your Coors Light or Bud Light or whatever. But if you like good beer, there’s an endless supply of craft options.

Is this the model for weed?

Absolutely. As I say in the book, I think there will be a lot of cannabis consumers that are price-sensitive. Their most important factor is to get potent weed at the cheapest price. And for them, maybe that Big Marijuana model will be attractive.

But what we’re seeing in dispensaries around the country is that people tend not to gravitate to the absolute cheapest possible or lowest-grade strains. Many cannabis consumers want high-quality, sustainable products. So it’s pretty clear to me that a craft beer model is perfectly replicable in the weed industry.

Are there special interests or corporate forces that are doing everything they can to prevent the weed industry from becoming like the beer industry?

No one entity can get big enough yet to attract the ire of federal regulators. For that reason, I think there hasn’t yet been an attempt to have a complete takeover. Now, are there people waiting in the wings? Probably.

And what’s happened since is that those companies have really struggled to scale up. It appears, at least based on their experience, that cannabis is not the easiest crop to grow on a really massive large scale. And that lends credence to the idea that this kind of smaller-scale artisanal product will be able to survive.

A big argument in your book is that a craft weed industry would be an economic boon for rural communities and small farmers across the country. How so?

Right now, there are 33 or 34 states that have legalized medicinal marijuana and 11 that have legalized recreational marijuana. All of those states have their own in-house cultivators and industries. That’s been a huge economic boon for those states. And why wouldn’t they want to protect them? Eventually, there’s likely to be a lifting of the federal prohibition. It makes sense that those states would want to promote economic development in rural areas and protect those agricultural interests that have sprung up.

Without protections, that entire economy might collapse. There’s really no reason for elected officials not to want to protect those rural economies and in other areas promote rural development with the potential for cannabis.

And on this front, you say that following the wine industry is an even more useful model, right?

Yeah, I like this idea of certifying where an agricultural product comes from. It’s a great model for keeping the cannabis industry local and keeping it diversified and allowing those rural economies to be protected with that designation of origin because you’re differentiating that product from a generic product produced by the Big Marijuana giants.

Is there a country or a state right now that serves as a model for how it ought to be done, something that could be scaled up at the federal level?

I don’t think any one state is doing it perfectly, but in a few years, once we have a track record for this, I think we’ll be able to pick and choose aspects that we like. I’ll give you a couple examples, though.

I think California is probably on the forefront of a lot of these issues, especially from a cultivation standpoint, which makes sense because they’re the largest producer of cannabis in the US. But they have been thinking about these issues, like sustainability and environmental regulations, for a long time.

The California Department of Agriculture is moving forward with an appellations project that would certify designations of origin. And historically, they have promoted small-scale farming by having an acreage limit on cannabis farms. You could only grow up to one or two acres of plant canopy depending on the type of permit you have. I think they’re thinking about this in a lot of really good ways.

Another great example is Massachusetts. They’re giving preferential treatment to small-scale cultivators, but, just as importantly, they’re favoring what they call “justice applicants.” And justice applicants are people who come from communities that were disproportionately impacted by the war on drugs. And I think that’s something that states are going to have to look at and follow.

So far, a lot of the people involved in the legal cannabis industry are middle- to high-income and white. And the war on drugs really disproportionately impacted people in communities of color and in low-income communities. Thinking about how to distribute the benefits of legalization in an equitable way is incredibly important, and Massachusetts is laying down a great blueprint for how to do it.

Monday’s Iowa caucuses should be the last
The 3 most interesting moments from Kamala Harris’s MSNBC town hall
Fur is dead; long live fur
Everyone in the White House cluster who has said they tested positive for the coronavirus
American Horror Story: 1984 puts the camp back into teen slashers
Coronavirus could lead to the highest unemployment levels since the Great Depression